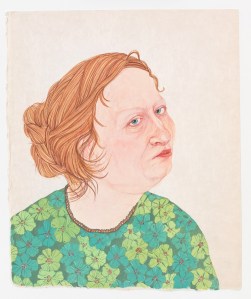 The face is not a perfectly oval stage for sight and emotion. For Amy Cutler, it’s a cancerously misshapen gestalt—marked like a knuckle or a fist with venous blue smudges and faint red lines—whose features expand upon but never live apart from their central squelch. They unspool in a restless sequence that always reads from step to step—from a lovingly massive nose to its adjacent beady eyes, for example, or from those irritated red eyes up to an expansive brow—but has no regularity of overall proportion. Ms. Cutler has painted 19 such imagined faces, all women, in gouache on heavy, fibrous paper, each one framed between beautifully rendered, slightly stylized hair and the collar of an exuberantly colored rayon blouse.

Anne wears a little green hat, Paulina wears a rose beret and Renata keeps her throat wrapped tightly in pearls. Ursy just got off work at the diner but still has plenty to do at home. Painted with both a caricaturist’s cutting insight and her dependence on the liberating distortions of the flat medium, the faces depict one highly specific emotional state after another—vindictive peevishness, pompous melancholy, the resolute pragmatism of an entrenched neurotic—as an ad-hoc coalition of accidental gestures. Any apparent humanity must be an illusion. Sabine, for example, a stolid farm girl in a cornflower-blue dress, looks steady, but her forehead doesn’t quite meet her hair. On the other hand, how certain is our own humanity? Lena’s face, under cascading waves of marceled blond hair, is infantilized by obesity and too much makeup. With her lips pursed, head tilted back and chin jutting forward, she gazes into the distant, immaterial heaven of self-righteous self-satisfaction that she obviously believes will reward a life of resentful self-denial. (Through March 9)