New York City’s public housing complexes are small cities unto themselves, sealed off from the grid and flow of surrounding streets, pinwheels of bricks and concrete with scant patches of green. Built in 1956, Forest Houses, a 46-building New York City Housing Authority complex in the Morrisania section of the Bronx, is characteristic of its era. Besides the fact that the buildings top out at two stories, they do not relate to their immediate environment, let alone the environment.

More than 50 years later, affordable housing remains one of the city’s greatest challenges (if not its greatest). The architecture, on the other hand, has improved considerably. Arbor House, a privately-owned 124-unit, housing complex that abuts Forest Houses, opened today at 770 East 166th Street. It boasts not only energy-efficient features and a living green wall, but also a 10,000 square foot hydroponic rooftop farm.

“This building is incredibly advanced, it’s at the forefront of green and affordable housing,” RuthAnne Visnauskas, deputy commission of the Department of Housing Preservation and Development told The Observer. “It uses recycled materials and has been built with a big focus on air quality, which is really important for areas with high asthma.”

Built via a public-private partnership between NYCHA, the Department of Housing Preservation and Development and Blue Sea Development, Arbor House is the result of a program that pairs dilapidated and vacant NYCHA land with private developers to create affordable housing. Since 2004, the program has produced some 2,000 units and has another 2,000 under construction and in pre-development in Manhattan, the Bronx and Brooklyn.

Besides the living wall and the rooftop hydroponic farm, Arbor House has other features more commonly found in luxury developments than low-income housing: it’s LEED platinum certified, has air-filtration systems, low and zero VOC finishes, indoor and outdoor exercise areas, and was built with local and recycled products. The eight-story building also has easily-accessible, windowed stairwells to encourage residents to take the stairs and thus increase their daily exercise.

The building’s 124 rental units—16 studios, 33 one-bedrooms and 75 two-bedrooms with one superintendent apartment—are designated for low-income households earning less than 60 percent of the area median income, which is $49,800 for a family of four. Twenty-five percent will have a preference for NYCHA residents and those on NYCHA’s waitlist. While the building’s official opening was today, the building is not yet occupied; Ms. Visnauskas said that residents should start moving in within the next month.

Arbor House cost approximately $37.7 million, a cost that was heavily subsidized, with $36.76 million provided in the form of local, city and state subsidies, Reso A funds, tax credit equities and tax exempt bonds. Additionally, NYCHA sold the land to Blue Sea Development at below market rate.Ms. Visnauskas said that HPD is increasingly embracing green building practices—Via Verde, another HPD affordable housing complex in the Bronx whose units went on sale last year, was widely lauded for incorporating green building techniques, environmentally-friendly features and decked gardens. But she added many of Arbor House’s features, particularly its living green wall and its rooftop farm, are a first for the department.

While many people tend to associate green building with additional expense, she said, this is not always the case. Indeed, features like windowed stairwells, smart thermostats and energy-efficient appliances save money in the long run. And the rooftop farm, to be operated by Sky Vegetables, is expected to generate money by selling produce—a percentage will be set aside for the building’s residents and the local community to be purchased via CSAs and the rest will be sold commercially.

“We’ve been able to work innovative, green elements into our projects without bursting the bank” said Ms. Visnauskas. “In this case the urban farm is an income-generating business, it’s a productive use. Green building doesn’t necessarily mean building more expensive, it means building smart.” 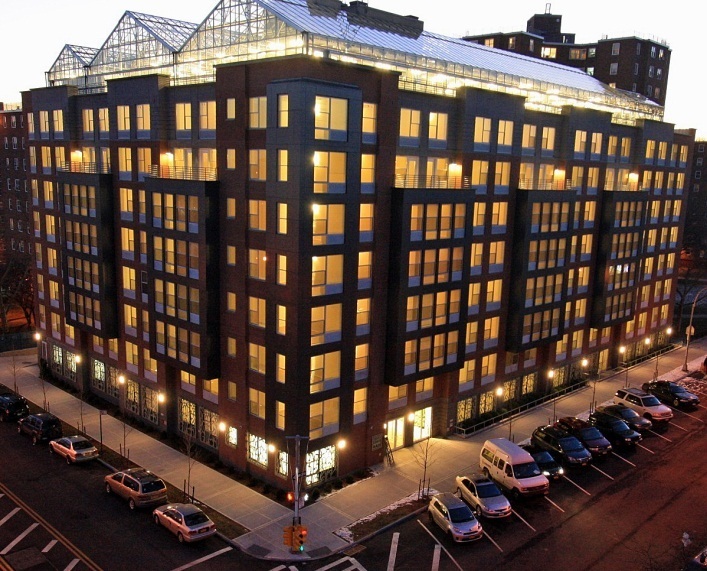