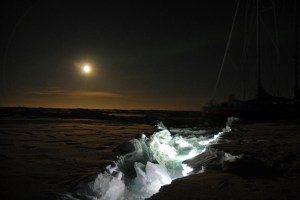 World travel for most New York-based artists born during the Ford administration consists predominantly of trips to Venice, London, Paris, Berlin and maybe Sharjah or Hong Kong for a residency or a biennial. Not so for Ellie Ga, whose work in the last few years has focused on archival material gathered during a five-month expedition to, of all places, the North Pole—about as far away from the art world, not to mention civilization, as one can hope to get. In September 2007, Ms. Ga took a Twin Otter plane from Svalbard, an archipelago (pop. 2,394) halfway between Norway and the North Pole, and joined a small crew aboard the Tara, a 90-foot-long ship that was shaped like an olive pit and was drifting in the Arctic ice. Its rudders had been removed and the engines shut off, so that the boat and its crew were left at the mercy of wherever the frozen ocean took them. Last week, as part of the monthlong group exhibition “Walking Drifting Dragging” at the New Museum, Ms. Ga presented a performance piece about the expedition called The Fortunetellers, a kind of roving lecture series/vacation slide show combining overhead projections, photographs, maps, charts and sound installations—mostly the sound of the Tara scraping against the ice and, in Ms. Ga’s words, “the slow swell of the ocean.”

The joke among her crewmates was, “Well, what’s she going to do, paint all day outside?” Ms. Ga said in an interview at the museum on the day of the performance. “At first everyone was really skeptical. My first idea was that I’d just gather material and work on it later, but I realized I had to make work for these people in order to be accepted socially. Because, being from New York, I had no polar skills or anything.”

Life on the ship was regimented—when Ms. Ga first arrived, some of the crew had already been there for five months—but the weather was another story. Forecasts from headquarters in Paris said the ice would spit the ship out in three weeks. That didn’t happen. Then, just before Christmas, it seemed like they’d be out in a day. They were in the ice for another six weeks. “For the most part, we rely on the weather forecast to shape our sense of the future, which makes me wonder if there isn’t a prophet held in higher esteem by our society than the weather forecaster,” Ms. Ga says in her performance.

The one thing the crew could count on weather-wise was a total absence of daylight. On Oct. 4, not long after Ms. Ga boarded the ship, the sun rose at 9:43 a.m., set at 12:19 p.m. and then disappeared below the horizon for months. The crew eagerly awaited the full moon, the only available natural light, which gave Ms. Ga some options for photographing her surroundings. Otherwise, she would use a headlamp to light the fissures that formed in the ice and hope for the best. In either case, she had to use a tripod, which she doesn’t normally care for much, because the shots required such long exposures. But this meant she’d have to take her gloves off to fiddle with the buttons on the camera. She was astonished at how quickly her fingers would start to freeze.

Ms. Ga took a photograph every day from the hull of the ship, but for the most part, her duties fell in the category of housekeeping. Her first task was to dig frozen parachute cords out of the ice, left there by a Russian crew that had dropped a tractor and supplies by plane the season before. There were also cooking duties and cleaning duties. She took ice core and plankton samples (the only living thing in the ice, besides the crew) and, her most consistent task, cut up snow, stashing it in Ikea bags and bringing it back to the ship to use for drinking water. There was a crew of 10 and no common language between them.

“Of the six French, two spoke English well,” Ms. Ga told The Observer. “The others, not so good. Of the non-French-speakers, one spoke really good French. The Russian and the Norwegian didn’t speak any French. The Russian barely spoke English. And I decided to learn French. That was my mission. I was really low on the totem pole. I was the only artist, the only single woman, and I spoke French like a 2-year-old. I was so insistent on learning French that there was so much I didn’t know that was going on. The chief of the expedition, he came out with a book, and I read it and thought, ‘Oh, that’s what we were doing.’”

During her performance, sitting at an overhead projector and pushing photographs of the crew aside with her hand, Ms. Ga said, “the sunless days are marked by established routines: the sauna every four days, a shower every seven days, night watch every five days. Sometimes I mark the days of the week by the amount of alcohol I get: Monday, none; Tuesday, two glasses of wine; Wednesday, a pre-dinner drink; Thursday, none; Friday, none (but I get to take a shower); Saturday, a pre-dinner drink; Sunday, one can of beer.” It wasn’t a matter of not having things, but rather not having agency. The ship was stocked with food and a “beautiful” wine cellar. They’d find any excuse to break out the booze (a “crossing 80 degrees north party,” for instance), but there were lots of limitations. She had brought red pepper flakes with her from New York, because she likes spicy food. She handed them over to the cook—“the true chief of an expedition,” Ms. Ga said—and the first night at dinner, she got up from the table and grabbed them from the kitchen. Later, the ship’s doctor told her she’d really screwed up. The red pepper flakes were no longer hers to use as she wished; they belonged to the boat now.

She did have her methods of maintaining control. Since most of Ms. Ga’s artistic duties were accomplished in off hours, she was usually the first one up and the last one to bed. She’d gotten into the habit of taking everyone’s leftover alcohol from a party, pouring it into a glass and stashing it in a cupboard in her cabin so it was there if she wanted it. Beyond that, her work broke up most of the monotony.

“I remember thinking about myth and metaphor a lot,” Ms. Ga said, “and realizing that everyone was seeing the same symbols. The collective unconscious becomes very palpable when you’re in the middle of nothing. I guess that’s how mythology starts—people in a limited world, with limited knowledge. You have to invent why it thunders. The guy pumping kerosene has to be a symbol of something, because he’s doing it every day.”

The expedition happened somewhat accidentally for Ms. Ga, who, through a friend, had found work photographing oversized prints at the New York Explorers Club. The job turned into a residency, with Ms. Ga researching early attempts at photography in the high north in daguerreotypes from the club’s extensive, disorganized archives. Eventually she decided she wanted her own archive instead of living vicariously through somebody else’s and found an expedition looking for an artist through the club’s head archivist. She compares her work in the arctic to an earlier project, “Classification of a Spit Stain,” an attempt at organizing the stains on New York sidewalks through a “micro exhibition of the city streets and where the stains form,” like cracks in the ice. She said, “It’s about banality. That’s where the poetry is.”

Still, there is no precedent in her life for her experience in the North Pole.

“I’m from Staten Island,” she said. “I’ve never even been camping.”