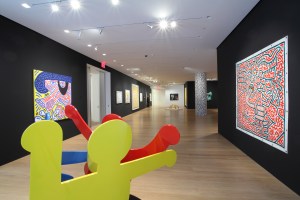 The news last week that Christie’s International will close Haunch of Venison, the gallery it bought in 2007, electrified the art world. Christie’s and Sotheby’s are the twin behemoths of the global auction business, and Christie’s acquisition of Haunch six years ago was a galumphing step onto the turf of dealers. The war of the auctioneers and the dealers over their slice of the secondary or resale market had been underway for two decades, but the Haunch move was a move into the primary market, which handles working artists and new art.

This doesn’t mean, however, that Christie’s is backing off private sales—quite the opposite. In fact, at both houses, these are strong, and getting stronger. “The proposal is for Haunch of Venison to evolve into Christie’s private sales,” Emilio Steinberger, the gallery’s senior international director, told Bloomberg. Haunch’s New York gallery in Chelsea will be shut down, but its London quarters will become a Christie’s private sales exhibition space. Private sales at Christie’s last year, Bloomberg reported, were $990 million, “up 26 percent from the previous year. They represented 16 percent of business in 2012.” As for Sotheby’s, it told The Observer that during the nine-month period that ended in September 2011, private sales represented 14.2 percent of its consolidated sales, but that the total for the equivalent period last year was 20.4 percent. Both houses expect these growth rates to continue.

Dealers have been getting increasingly antsy about the houses’ incursion onto their territory. Last October, Robert Pincus-Witten, a former director of both Gagosian and L & M galleries, was one of the curators of a show of New York painting from the 1970s that took place around the corner from Christie’s HQ at Rockefeller Center, in a space that was once Haunch of Venison’s New York gallery (before Christie’s moved it to Chelsea) and is now the New York exhibition space for Christie’s private sales. (Sotheby’s also has an in-house private sales gallery, called S2.) Was he being sniped at for going over to the dark side?

“But at the moment, there is no question that the most interesting development is the fact that there are now private dealing spaces in the context of public auction houses. The industry is evolving.”

Not long ago, you could have represented the art world like the diagram of a cow in a butcher’s—everything in its place. “It used to be the dealers were the taste-makers, the museums were for scholarship and the auction houses were house clearance sales,” said the London dealer James Mayor.

In a globalizing art economy, the reach of the Duopoly extends ever deeper into dealers’ byzantine innermost workings. “You sometimes feel the sole intention is to push the dealer out,” Mr. Mayor said. “That they want to become the leaders in the primary and the secondary markets.”

The shift in the art world’s tectonic plates began in slo-mo when Al Taubman, the Detroit shopping mall pioneer, took over a foundering Sotheby Parke-Bernet in 1983. Mr. Taubman, a man with a fine retail brain, divined that ’80s-style collectors might be lured by media attention, and glammed up the night sales.

Thereafter, markers of the auctioneers’ moves onto dealers’ turf would include Sotheby’s joint acquisition with Acquavella Galleries in 1990 of the Pierre Matisse estate. In 1996, Sotheby’s bought the gallery of Andre Emmerich, and it took over Deitch Projects the following year. But according to Alex Rotter, now head of contemporary art at Sotheby’s, “We never followed through. We gave the inventory that we purchased to other galleries to sell or to stick it in auction. We never did any sales.” It closed Emmerich two years later and was bought out by Deitch (who has since closed his gallery and become director of the Los Angeles Museum of Contemporary Art).

The dealers struck back. Art fairs became an arena for a robust counter-attack. But even as the phenomenon has gathered strength—at tsunami level in Miami this December—the auctioneers were building war engines of their own. Their private sales departments.

Christie’s and Sotheby’s have sold pieces privately from the get-go. In the beginning, it was limited to those that weren’t knocked down during auctions. And they stuck to the secondary, or resale, market. That red line frayed in the early ’80s when art stars slipped work into auctions. In 2006, Sotheby’s began putting work by living sculptors into selling exhibitions at Chatsworth, the Duke of Devonshire’s seat in England. When Lisa Dennison, director of the Guggenheim, resigned in 2007 to join Sotheby’s, she put together a selling exhibition that crisscrossed cultures and historical periods, “as traditional galleries can’t and museums don’t,” said Ms. Dennison, who is now chairman of the house in North and South America.

Around the end of 2008, Alex Rotter, in talks with Sotheby’s CEO William Ruprecht, came up with a business plan for private sales. “It was at the worst point of our market,” he said. “It was a program that used every expert we had. For me, it was important to get the younger generation into the mind-set to think both ways.”

Christie’s purchase of Haunch of Venison played a part in his thinking, “but the idea of buying an existing gallery was not the right way to go for me. It was just a different approach of how to get into the gallery business. Or eventually into the primary market.”

“Private sales are a huge area of growth,” said Amy Cappellazzo, Christie’s chairman of postwar and contemporary art development. “And it’s part of our method of strategizing an object. It’s one of the key questions. What are the client’s needs and wishes? Do they need the money very quickly? In which case, a private sale would be quickest. It is an option that we talk about every day.”

The closure of Haunch, a gallery that works with a stable of artists, though, represents a move away from private sales of primary-market art. “It made sense to us, since we’re incredibly active in secondary-market trading, to focus on that,” Ms. Cappellazzo said. She includes artists’ estates in this. Last September, the Warhol Foundation enlisted Christie’s to sell off remaining inventory. “That is definitely something we will be moving into more.”

But what of secondary-market dealers? Might they go the way of local bookstores?

“Years ago, I made a quote to some blogger that you could see how the auction houses are like big-box retailers that can put the moms and pops out of business,” said Ms. Cappellazzo. “Peter [Schjeldahl] cited me twice in The New Yorker, saying my comment isn’t coming true. Well, I think it is.”