Tilman J. Fertitta made a whale-sized fortune selling shrimp at tourist-oriented chains like Bubba Gump. Now the Texas billionaire and Landry’s Restaurants CEO has plunked down $19.5 million for a Tribeca pied-a-terre—a small portion of the vast wealth generated by his empire of middle-brow restaurants.

Mr. Fertitta may lack the cult-like following and breathless reviews of celebrated Manhattan restaurateurs like Keith McNally and Danny Meyer, but do either of them have a full-floor condo with a hot tub and south-facing terraces off both the master bedroom and the living room?

The 4,000-square-foot apartment will give the Houston-based entrepreneur a homebase on the East Coast. Mr. Fertitta’s 164-foot yacht, aptly named The Boardwalk, may have been great for trips to Atlantic City, where he owns the Golden Nugget casino, but it’s considerably less practical for visits to the Big Apple.

Douglas Elliman’s Melanie Lazenby brokered the sale; the unit was not listed publicly. Ms. Lazenby called the condo “an absolutely beautiful apartment with high ceilings,” adding that it was in “mint condition.” She declined to comment on the identity of either the buyer or the seller, who is listed on the deed as York Street 1 LLC.

The seller bought the apartment as a sponsor unit for $14.7 million back in 2008, records show. Mr. Fertitta, who is known for waiting to acquire businesses until their price hits rock bottom, made an entirely out-of-character move by purchasing the the condo for $19.5 million. But then, the Enrique Norton-designed apartment was no crab shack. Or even a chain of crab shacks. Or even a chain of crab shacks and Rainforest Cafes, where some readers may remember eating hamburgers with tropical names on family vacations.

And the buy won’t only give the restauranteur a downtown showpiece. It also allows Mr. Fertitta to get back to his real estate roots—he ran a construction company after he graduated from college and started in the food-service industry as a real estate specialist for Landry’s.

Besides a trendy location not far from the , 1 York Street also has a Maserati dealership downstairs. We wonder if Mr. Fertitta, who owns a Bentley and Rolls Royce dealership in Houston, is interested in making an investment? After all, Manhattan’s deep-pocketed visitors have proved that they are willing to shell out for more than seafood platters. 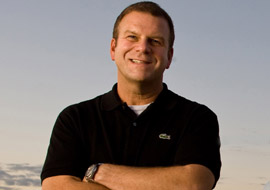