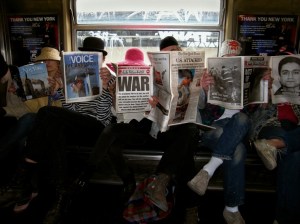 This summer, the Brooklyn Museum will host a major retrospective of the Bruce High Quality Foundation, the anonymous Brooklyn–based collective known for their ersatz compositions in a variety of mediums.

The show will be titled “The Bruce High Quality Foundation: Ode to Joy, 2001-2013” and will feature “less than 17,000 works,” according to a source that asked to be identified as “a former White House official who wishes to remain anonymous for fear of reprehension.”  It opens June 28 at the museum’s new Robert E. Blum gallery, and runs through Sept. 22.

The BHQF is featured in two shows at the moment, a group show curated by Vito Schnabel at Acquavella Galleries and a show titled “The Transubstantial Bruce” at Contemporary Fine Arts – Berlin.