New York City Congresswoman Carolyn Maloney was quite pleased with President Barack Obama’s State of the Union address last night, but she’s not optimistic about Congress heeding the president’s call to to avoid the $85 billion in automatic spending cuts known as the “sequester” that are scheduled to go into effect March 1.

“I love his speech he came out swinging,” Ms. Maloney told Politicker about the president’s speech last night.

Ms. Maloney also said “there’s no question” President Obama’s speech was an indication he will be more aggressive in pushing for his agenda in his second term than he was in his first.

“He sounded very F.D.R. with all his specific programs plans and visions,” she said.

One of the central elements of the president’s State of the Union address was  a push for Congress to avoid the sequester cuts by coming to a deficit reduction agreement ahead of the deadline. While Republicans have said they want spending cuts to focus on social programs and so-called entitlements, Democrats have focused on closing tax loopholes. President Obama urged his fellow Democrats to “embrace the need for modest reforms” in Medicare and other social programs, but he also expressed the need to get “rid of tax loopholes and deductions.”

“I realize that tax reform and entitlement reform will not be easy.  The politics will be hard for both sides.  None of us will get 100 percent of what we want,” President Obama said. “But the alternative will cost us jobs, hurt our economy, visit hardship on millions of hardworking Americans.  So let’s set party interests aside and work to pass a budget that replaces reckless cuts with smart savings and wise investments in our future.”

Though Ms. Maloney said she “certainly hope[s] that there will be an agreement,” she was decidedly pessimistic about the prospect her colleagues in Congress will be able to make a deal to dodge sequestration.

Though she described the Republicans as “pretty dug in” on the budget fight, Ms. Maloney held out hope there may be a last minute deal as there was when Vice President Joe Biden and Senate Minority Leader Mitch McConnell managed to come to an agreement to avoid the so-called “fiscal cliff” earlier this year.

“Maybe they change,” Ms. Maloney said of the Republicans. “That’s what happened with Biden and McConnell. Maybe Biden and McConnell will come in or the president comes in at the end, but right now, we’re marching towards sequestration. I hope we can avert it or there will be an agreement, but they seem very divided.”

For his part, Mr. McConnell indicated he won’t be part of any at-the-buzzer dealmaking when asked about the looming sequester by The Hill yesterday.

“Read my lips: I am not interested in an eleventh-hour negotiation,” he said. 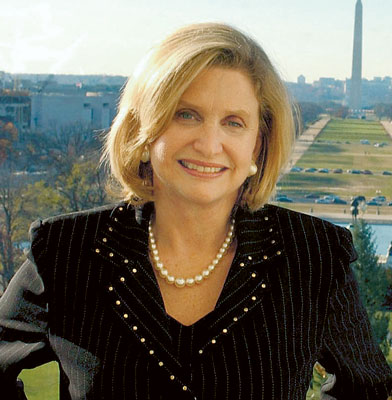