The controversy swirling around U.S. Sen. Bob Menendez deepened Thursday as it moved into a realm far beyond accusations that he had solicited hookers.

The Washington Post reported last night that Menendez had tried to intervene more than once in a Medicare billing dispute involving friend and campaign donor Salomon Melgen.

The news follows reports last week that Menendez had moved to intervene on a Dominican Republic port security contract worth $500 million to Melgen, a Palm Beach eye doctor who has donated thousands to Menendez over the past several years.

Menendez also faces an ethics probe over whether he inappropriately accepted flights on Melgen’s private plane.  Earlier this year, Menendez reimbursed Melgen nearly $60,000 for two flights on the plane, but the payment came two years after he actually took the flights.

The senator from Hudson County attributed the late payment to an “oversight.”

The new revelations from the Post and the Times move what began as an accusation  from an anonymous source that Menendez had engaged with hookers while traveling with Melgen in the Dominican Republic – an accusation the senator denies – into the realm of using his office to aid a donor.

Melgen has donated heavily to Menendez and last year donated $700,000 to a Democratic PAC that spent more than $600,000 on Menendez’s race against challenger Joe Kyrillos.  Menendez had a two to one money advantage over Kyrillos in the race.

Menendez’s office made no attempt to hide the senator’s role in helping Melgen, but denied the senator knew that the eye doctor or his company Vitreo Retinal Consultants was under investigation for Medicare fraud.

Agents with the FBI and the federal health department raided Melgen’s office last week in what is likely part of the ongoing probe.

“Senator Menendez was never aware of and has not intervened in any Medicare fraud investigation on behalf of Vitreo Retinal Consultants,” his office said in a statement.

Aides to the senator told the Post Menendez never asked for specific action in Melgen’s case, which stems from a dispute over billing for eye injections related to macular degeneration.

According to the report Medicare allows for a $2,000 reimbursement for the injections, however, Melgen was using the same vial for several patients and billing $6,000 or $8,000 per vial.

In 2008, after an audit of Melgen’s practice, Centers for Medicare and Medicaid services ordered Melgen to repay the reimbursements, however the eye doctor has disputed the claim.

According to staffers, Menendez twice questioned officials on the policy as well as the specific audit of Melgen.

“On a separate issue regarding Medicare reimbursement, he has in the past raised concerns with CMS about conflicting guidelines and ambiguity in CMS rules that are difficult for providers to understand and can lead to judgments after the fact,” the statement to the Post said. “His interest was in making sure providers were not penalized if CMS clarified or changed the rules of the game retroactively.” 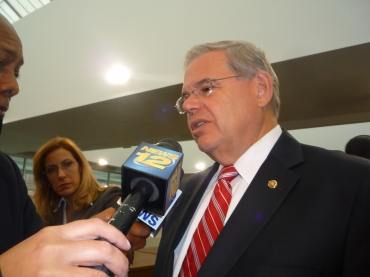