“Millions of New Jersey families are struggling and suffering with an unemployment rate that hovers near ten percent, higher than it was a year ago and two points higher than the national… while the governor continues to pray at the altar of the Republican Party’s bedrock principles of tax cuts to millionaires,” Buono told an enthusiastic crowd in a packed gym at New Brunswick High School.

The senator vowed to stand up for the poor and middle class in all weather – not just in the aftermath of Hurricane Sandy.

“No one will disagree we need a strong bipartisan effort to rebuild New Jersey,” said the Democratic candidate. “But that is not enough. We also have a responsibility to help those whose lives were in turmoil before the winds ever gusted or the waters rose.”

She hit gun control, marriage equality, and economic justice as those root areas where the sitting governor has failed the state, and where she would act differently.

She also objected to Christie’s tone and what she sees as his focus on higher office at the expense of New Jersey.

At several points during her speech, the senator cited what she sees as the volatile Christie’s lack of respect for people.

“I was taught that treating others is a responsibility to be met,” said Buono, who referenced her immigrant Italian butcher father throughout her remarks.

“Barbara Buono” signs bobbed above the crowd  as Sweeney gave a nod to his and Buono’s well chronicled backroom imbroglios.

“We’ve had legendary fights,” the Senate president said. “But we would have marriage equality in this state with Barbara Buono as governor. We would have a minimum wage increase. If Barbara Buono were governor, millionaires would be paying their fair share.”

“This governor spends time campaigning for right wing conservatives instead of working for the people of New Jersey,” Wisniewski said of Christie.

Buono, he said, is “more about you than YouTube.”

“She’s more concerned about the people in Washington Township than the pundits in Washington, D.C.,” the state chairman added.

Naturally, insiders craned their heads around the room in search of political animal warmth among unrecognizable faces.

A former Senate majority leader, Buono was the only elected official in the party who stepped out to face Christie, whose numbers show him in a strong position to win re-election.

All the county chairs with the exception of Union County have issued statements backing Buono as of this week. But the nagging question on the heels of those releases was whether those people would actually put their cars in gear after pressing “send” on the computer key pad.

No South Jersey chairs showed up, at least by the looks of the cordoned-off holding pen for dignitaries.

Also among the missing: Newark Mayor Cory Booker, the state’s two U.S. Senators, and the Democratic congressional delegation with the exception of Pallone.

Oliver was the biggest Essex County presence in the room.

“Barbara epitomizes strong leadership,” she said. “Strong leadership is having the courage to swim upstream when the current is coming in the other direction. …Barbara Buono will be the first woman Democratic governor in New Jersey.”

“Absolutely,” Whelan said, when asked if his presence in the room – all the way from Atlantic County – signified party unity. “As I’ve told you before, I think she’s a great candidate to show contrast with Christie and I look forward to campaigning with her.”

McCormac led Christie around his Middlesex County in the immediate aftermath of the Republican’s victory over Jon Corzine, prompting some Democrats to mouth Benedict Arnold epithets whenever anyone after that mentioned his name.

But McCormac this time is invested at least in a long simmering chairman’s battle – and in the wings also stood McCormac’s candidate to succeed Barnes – labor leader Kevin McCabe.

From across the gym, Assemblyman Troy Singleton (D-7) gave a thumbs up. Assemblyman Wayne DeAngelo (D-14) was there too.

A so-called “Christiecrat” because of her support for the Republican governor’s two-percent cap and the pen/ben overhaul, Diaz wants to take control of the local Democratic Committee – as a building block in support of McCabe countywide. Mayor of the most Democratic town in Middlesex, she can’t do that unless she visibly backs Buono. Her rival, local Democratic Committee Chair Leslie Dominguez Rodriquez, was also in attendance.

See below for a video of Buono at today’s kickoff… 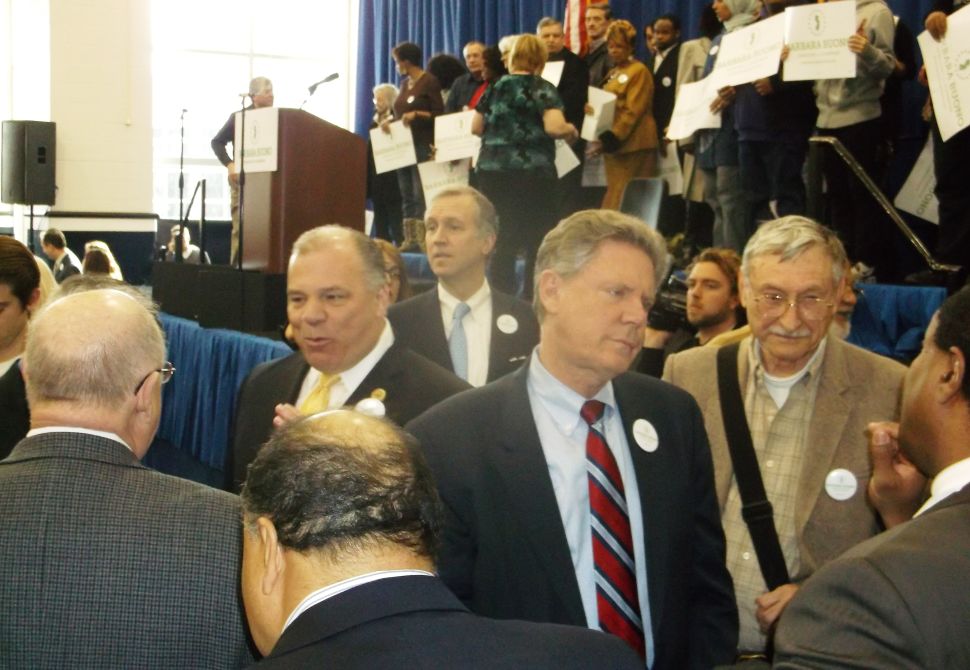