UNION CITY – State Senator/Mayor Brian P. Stack (D-33) was onstage and running out of superlatives to describe Gov. Chris Christie, who sat just behind him on the occasion of the official grand opening of Colin Powell Elementary School.

But these days, Christie is Stack’s hero.

“Make no bones about it, without Gov. Christie, this school wouldn’t have been built,”  the Democrat told a crowd packed into a gym less than a week after Democratic candidate state Sen. Barbara Buono (D-18) filled a gym in New Brunswick for her gubernatorial campaign kickoff.

“Governor Christie is here for us,” Stack said to racuous applause. “I stand behind the governor. I said he was the best ever, and he’s also the best I ever worked with – and that’s coming from a Democrat. This is about true leadership. …We need to stop the false idealism that the Democrats (are always right). In Union City, he’s numero uno.”

The line brought down the house.

A gratified Christie received a standing applause as he rose and fell into a Stack bear hug on his way to the microphone.

“I can’t do any better than that,” said the Republican governor when the wolf whistles finally died and people reclaimed their seats.

He praised Stack as an extraordinary advocate, and decried schools construction in the past when the money merely went – in Christie’s words “to the politically connected.”

“Now that money can be spent wisely,” declared the governor, flanked by life-sized replicas of Greek temples projecting through the gym wall.

“There was an extraordinary need here,” Christie added of the edifice that opened in time for the start of the 2012 school year, one of seven schools Stack built in ten years.

The Schools Development Authority (SDA) has invested more than $272 million toward completed projects in Union City, including $46.2 million for the Colin Powell Elementary School, according to the governor’s office. The SDA’s current portfolio of active projects is valued at over $2 billion – including the 2011 and 2012 Capital Project portfolios (more than $1 billion), additional projects in construction ($86 million), emergent projects ($43 million) and Regular Operating District grants ($743 million state share).

Running for re-election this year in a state where registered Democrats have a decided edge, the Republican governor seized on a chance to riff on his second favorite subject after Hurricane Sandy: bipartisanship.

“A nonpartisan education,” Christie said, to applause. “Freedom and liberty only exist if we have an educated populace to fight for it.”

Christie’s appearance in Union City today came as the party’s biggest Hudson County presence continues to be tormented by headlines linking him to a Miami doctor/donor.

Like the younger Stack after him, U.S. Sen. Bob Menendez (D’NJ) was a protégé of Musto’s who became mayor of this city and remains its biggest political brand name.

But Stack’s show of force for Christie in a town he consistently wins 10-1 while turning out 10,000 reliable votes for himself, bore no plaintive signs – only love for Stack and Christie. 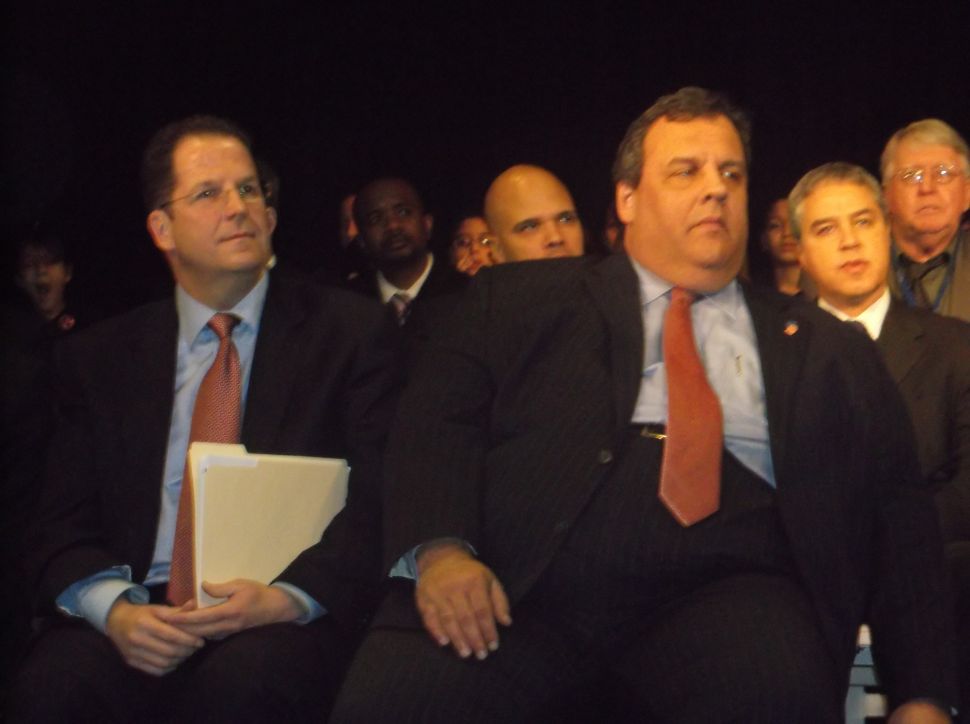