High level Democrats are in the process of reaching out to former Rhode Island Congressman Patrick Kennedy to discuss a potential run for U.S. Senate.

Democrats are hoping to schedule a meeting with Kennedy, who last year moved to Brigantine,  in the coming days to gauge his interest.

“If a Kennedy is interested in running for office in New Jersey, it would be crazy not to reach out to him and see where it goes,” said a Democratic source familiar with the plans.

Yesterday, Kennedy told the Philadelphia Inquirer that he doesn’t see himself as a 2014 candidate for U.S. Senate, however, some Democrats feel he may be convinced to run.

The announcement yesterday by U.S. Sen. Frank Lautenberg has set off rampant speculation over his eventual replacement.  Among the names in the mix are Newark Mayor Cory Booker, who has already opened his Senate account and has made his intent to run clear.  U.S. Rep. Frank Pallone also has made his interest known, but has yet to formally announce a run.  U.S. Rep. Rush Holt told PolitickerNJ yesterday that he also is interested in a potential run.

The state’s two top legislative leaders, Senate President Steve Sweeney and Assembly Speaker Sheila Oliver, both have expressed their interest, though last month Oliver told PolitickerNJ she could see herself backing Pallone shuould he jump into the race.

“Having Patrick Kennedy here in the state of New Jersey is very good for Democrats,” he said in October. “Sure, there’s a scramble – he’s a former congressman with a million-dollar brand.”

But like many who wore the million-dollar brand, Kennedy is not without his baggage.

Kennedy has in the past admitted to an addiction to prescription drugs, an addiction he has sought treatment for on at least two occasions. 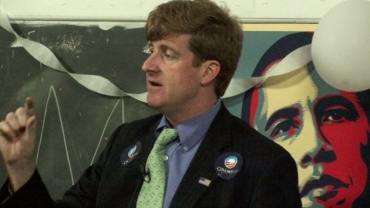