Essex County Executive Joe DiVincenzo has invited Gov. Chris Christie to next week’s scheduled state of the county address and Christie plans to be there.

The state of the county is set for next Tuesday night.

“We have invited to give remarks the governor, Senate president, and the Speaker and they have all confirmed attendance,” said DiVincenzo Chief of Staff Phil Alagia.

A source told PolitickerNJ.com that Democrat DiVincenzo will stop short of an endorsement of Republican incumbent Christie in a move reminiscent of Union City Mayor Brian P. Stack’s effusive bear hugging of the governor last week.

“It’s a government event, not a political event. Joe’s focused on government,” the chief of staff clarified.

DiVincenzo last month said of Christie, “The guy’s my friend; he’s probably been the best governor the state’s ever had, but I’m still a Democrat.”

Christie and DiVincenzo have longstanding friendly ties, going back to then-U.S. Attorney Christie’s letter on DiVincenzo’s behalf in the middle of the 2002 county executive’s race.

Christie blunted rumors around then-Freeholder Board President DiVincenzo when he wrote a two-sentence letter insisting that DiVincenzo was “not a subject or target of the grand jury investigation.” 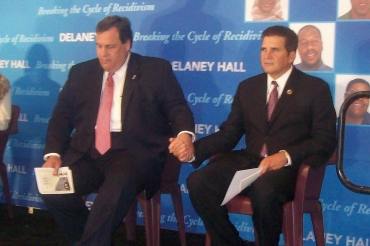