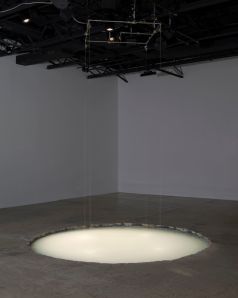 A large round hole—if it were a hot tub, it would be comfortably orgy-sized—has been gouged roughly out of the slick concrete floor of 303 Gallery and filled with milky gray water. Attached to the black duct-work and girders of the ceiling directly above it is a square of pipe surrounded by a speaker array. In the center of the square and at each of its corners is a computer-controlled spigot, dripping, spitting or jetting out, in a rhythmically complex 15-minute cycle, milky water pumped up from the pit in a closed circuit. This is Doug Aitken’s Sonic Fountain. Sometimes the surface is choppy, but sometimes the shadowy, intersecting circles are subtle enough to pass for an optical illusion. If the water, evaporation excepted, moves in a closed circuit of spectacle and bravado, the sonic circuit is discontinuous: the speakers are hooked to submerged microphones and play a kind of live underwater gamelan over the less resonantly percussive noise of the drips against the surface. But while you know it’s live—because you hear the speakers from above while looking down, and because the sound is so watery but you can feel that you’re standing in dry air—it sounds like a replay. (Through March 23, 2013)