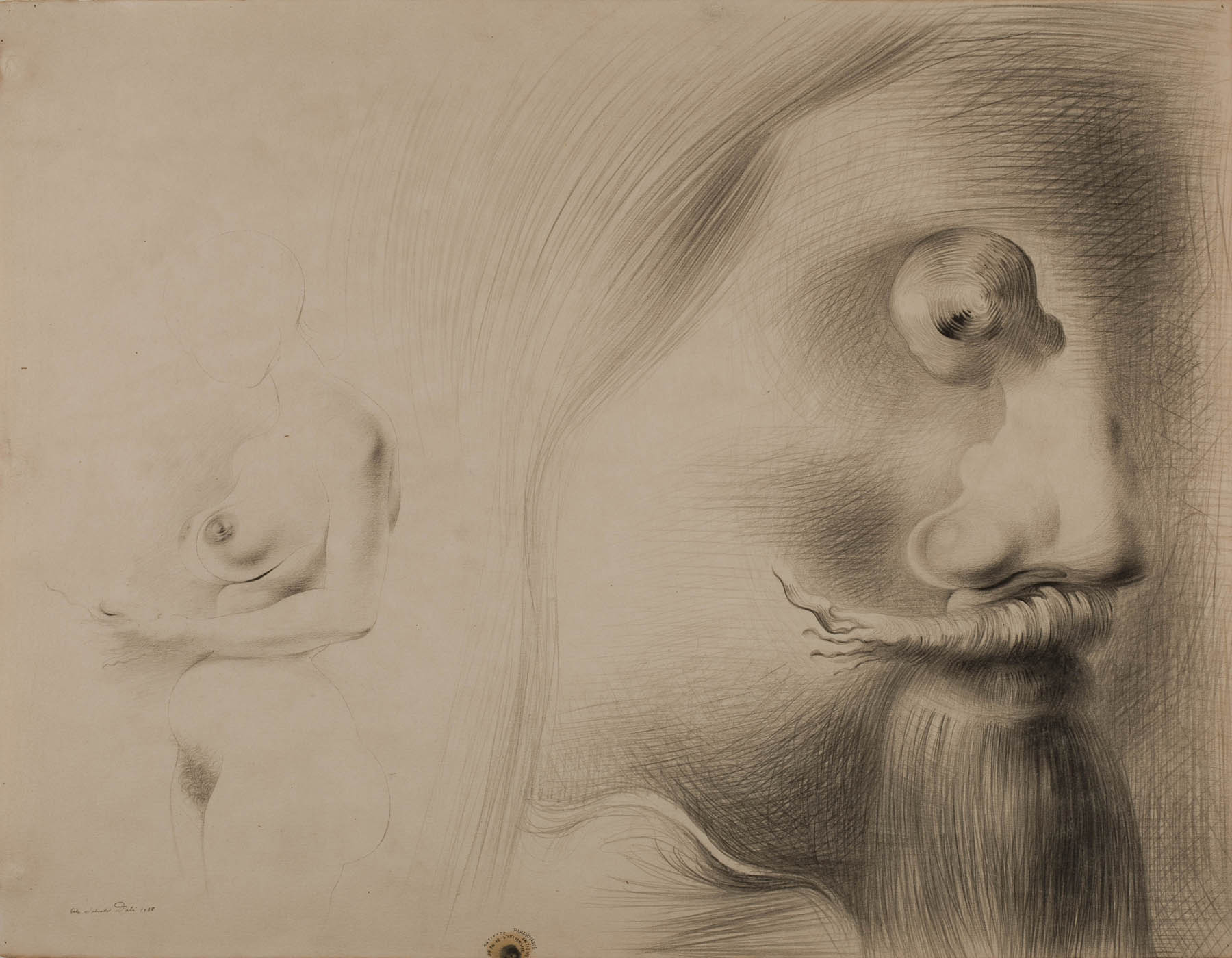 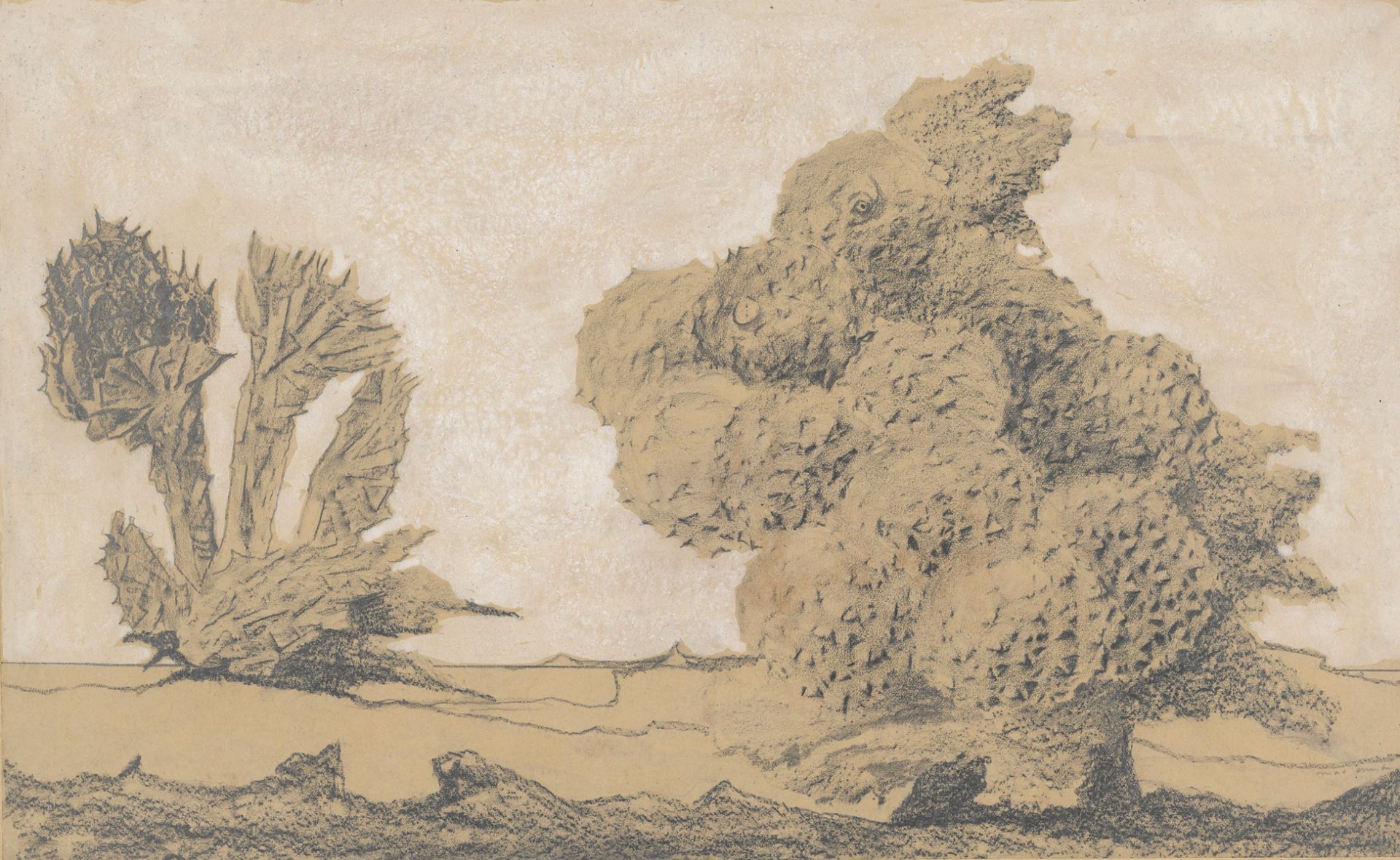 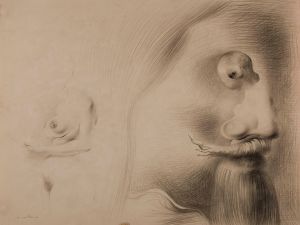 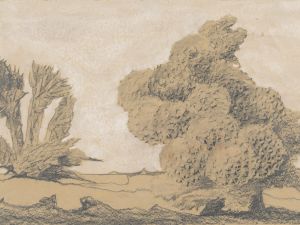 It is one of the legacies of Freud that we see scribbles on paper as revealing something about the unconscious mind of the person who drew them. A new show organized by the Morgan Library’s Isabelle Dervaux and the Los Angeles County Museum of Art’s Leslie Jones focuses on automatic drawing, dream imagery, frottage, exquisite corpse, collage and other drawing techniques of the Surrealists. It might be of interest to anyone who has found himself doodling idly, drawing his dreams, or interpreting inkblots.

Early predecessors on display hint at the Surrealist drawing to come: Dadaist Jean Arp’s collage works randomly dropped pieces of colored paper into arbitrarily ordered checkerboards of reds and grays. A 1915 calligramme, or visual poem, by the writer Guillaume Apollinaire lays out text in the shape of a mandolin, a carnation and piece of bamboo: forms that reflect the contents of the poem.

Works on paper had a privileged position in the Surrealist canon from the very start, thanks to André Breton’s “First Manifesto of Surrealism,” written in 1924. He argued that because of drawing’s immediacy, there is a direct link between the artwork and the artist’s unconscious mind. At the Morgan, the works on display support his thesis. Georges Bataille’s 6 Untitled Drawings for Soleil Vitré were executed during the psychoanalytic treatment the author underwent in 1925; they combine fragments of faces with top hats, Eiffel Towers, elephant ears and this exhibition’s most ubiquitous motif, the eyeball. Man Ray’s “camera-less” photograms link drawing from the imagination to photographs made without a camera. Yves Tanguy’s drawings feature petri-dish-like landscapes, and Salvador Dali’s have kinky dream imagery such as a man feasting on a woman’s high-heeled shoe. Henri Michaux’s Alphabet (1924), is a teasingly nonsensical system of nervously drawn pictograms. In 1926, Breton, Tanguy, Marcel Duhamel and Max Morise made “exquisite corpse” drawings—each artist got to add to a figure, with the previous contributions folded back and thus unseen—complete with elephant heads and serpentine tails. They look like exactly what they are: the nonsensical fruits of a drunken dinner party game. René Magritte’s Interpretation of Dreams presents self-contained one-liners: a black hat is captioned “the snow,” a woman’s shoe “the moon.”

The works in the show are grouped by technique, and for sheer experimental zeal, German Surrealist Max Ernst comes across as the group’s real innovator, the Thomas Edison of the Surrealist drawing. His technique of frottage, or rubbing with graphite on paper, translates into seascapes in which wood patterns bloom under the ocean and sun. The quasi-narrative juxtapositions of images from pulp novels, advertising and scientific journals in his collages yielded odd visual novels in which, for example, a Maori-tattooed woman refuses the advances of a manacled Venus.

Breton’s call was for images made spontaneously, without appeal to aesthetics, reason or morals. But at the Morgan, you can see that the idea of unconscious and unfiltered drawing was often used to say something else: Eduardo Paolozzi’s 1948 collages made from advertising images critique consumer culture. Czech Surrealists like Jindrich Styrsky constructed poetic/erotic fantasies: a steel axe rending a fuzzy peach, fish with comely legs in a cracked aquarium. Japanese Surrealists like Ei-Kyu, Terushichi Hirai and Kansuke Yamamoto made art that pushed back against the complacency of culture. And much of the work in the show is just plain beautiful, like Hans Bellmer’s gouache-on-black-paper painting Seated Young Girl with Two Heads (1935-37), with her oddly lovely labial petticoat folds and spider-webby spun stockings, or a 1935 collage by César Moro made on sparkling sandpaper. Often there is more deliberation in these works than the term “automatic” would seem to imply.

Of the thirteen women in the show, two stand out for their use of symbols. Leonora Carrington’s haunting drawing Down Below (1943) steals the show: it is a map of a mythical world that overlaps significantly with Spain, where she was institutionalized when she made the drawing. Suns, spirals and snakes fill out the territory. Frida Kahlo’s graphite works mix Mexican folk art with dream imagery.

The show extends its definition of Surrealism into the 1950s with drawings by Ellsworth Kelly (a 1951 grid of brushstrokes cut up and arranged by chance, reminiscent of the 1915 works by Jean Arp) and Abstract Expressionist Jackson Pollock (his tangled ink Untitled to PG, from 1943, is dedicated to Peggy Guggenheim). There is a pleasant contrast between the modesty of the mostly small-scale drawings on display and the sweep of the show, which traces the unconscious and the dream-image in art from about 1915 to 1955 through 70 artists and 15 countries.

But beyond its art-historical scope, the show will be of interest to those with a curiosity about the relationship between the thought and the mark. Flirting with dreams, language, politics, chance and sex, the Surrealist drawing is something you can do at home—it is, the show suggests, an attitude towards the unconscious mind, rather than a historically bound epoch. (Through April 21)