Earlier this afternoon, Gawker republished photos and a video of AlphaBoost CEO Matt Monahan drunk and naked during a vacation to India. The escapades were originally shared by Jesse Thomas founder of JESS3, a social media advertising firm.

Venture-backed startup founders are fond of booze-soaked jaunts to unwind from the pressure of crushing it, celebrating a big milestone, or just because they can afford to. The difference here is that Mr. Thomas graduated from ill-advised Instagram shots of popping bottles to sharing a video and photos of a stark naked Mr. Monahan cavorting on the beach, somewhere approaching blackout drunk.

And that Mr. Monahan got caught on tape at the same time that he’s trying to sell his company.

In the video, Mr. Thomas’ girlfriend looks on aghast while Mr. Thomas laughs and shouts, “Matt, you got a small ass dick, yo, what’s going on? If you’re gonna get naked, you gotta have a big ass dick, what’s going on?” The scene ends with a shot of an empty bottle of Johnny Walker Blue.

Gawker says the three arrived at Surya Samudra, a private beach resort, a few days in advance of Dave McClure’s “Geeks On a Plane” (GOAP) tour–“a sort of mega-nerdy season of Real World”–sponsored by the likes of GE, Google, Qualcomm, PayPal and, yes, JESS3. Mr. Monahan also serves as a mentor for GOAP.

The images and video were not only shared on Mr. Thomas’ private Facebook and Twitter accounts, but also from the official JESS3 company accounts, reaching tens of thousands of followers and subscribers.

Adding to the potential embarrassment, emails forwarded from a tipster to Betabeat indicate that around the same time Mr. Monahan was partying at the resort, he sent out an email to investors detailing discussions with “stakeholders” at companies like Facebook, Salesforce, Adobe, and more–and promised meetings with Google and Yahoo scheduled for next month.

(The tipster is not an investor. We have reached out to Mr. Monahan and will update the post when we hear back.) [Update 6.24 pm: We received a call from Mr. Monahan, who is still on vacation in India. He asked that the correspondence below be taken down. We have declined that request.]

Despite the fact that a deal hadn’t materialized, Mr. Monahan predicted that a “verbal offer we received will likely materialize in mid-March and provide us with leverage we can use to negotiate with others.” He also said, “The AlphaBoost entity would be shut down, and the entire team would take positions at the acquiring company.” Back in January, Mr. Monahan told investors and advisors, “If we do not sell the company before April 1st, we will start to speak with investors about a Series A to ramp up our products and revenue.”

*In the past few weeks, I have had discussions with stakeholders at Facebook, Salesforce, Adobe, Oracle, Acxiom, Rubicon Project, AppNexus, Demand Media, and Experian. Candidly, some of the discussions fell flat.  The feedback I heard was “Not a good fit given corporate strategy…”, “too small of a deal for it to be interesting..”, “we only want a portion of the team..”, etc. I have Google and Yahoo meetings scheduled for early March.  I am also setting up meetings with folks at companies like Science Inc, Intelligent Beauty, The Honest Company, and NastyGal to discuss options.  These types of companies have plenty of cash and are in dire need of our teams’ skills

— customer acquisition efficiencies on Facebook driven by owned and operated marketing technology. The verbal offer we received will likely materialize in mid-March and provide us with leverage we can use to negotiate with others. The deal on the table is taking shape as an exclusive license of our technology wherein we transfer our codebase to the acquirer in exchange for a lump sum of cash to be booked as AlphaBoost revenue.  That profit would then be distributed to equity holders and investors.

The AlphaBoost entity would be shut down, and the entire team would take positions at the acquiring company.  This deal structure was proposed to avoid a lengthy diligence process, and to minimize liability for all parties involved. The amount of cash paid for the exclusive license is still being hammered out but should provide a nice return.  That is all of the information I as of now…

The team is still heads down building product and servicing clients.  I am beginning to set up meetings for mid-march with investors to discuss the prospects of a Series A as a back up.

Have a great weekend, and let me know if you have any questions or ideas.

And here’s another email from the same tipster that Mr. Monahan sent to investors and advisors last month:

Sorry in advance for the long email, a lot going on, in a really good way…

*As I reflect on AlphaBoost in 2012, some thoughts come to mind:*

– We learnt some valuable lessons that we will carry with us forever.

– We had some major wins with clients, products, and within the team.

– The team has become lean and mean, and is firing on all cylinders.

– The team and business model are maturing.

– We have honed our focus on a product that is meaningful and differentiated.

– We are optimistic about the prospects for AlphaBoost’s investors and team.

– Startups are hard, but that is the fun part 🙂

– We have 4 months of runway left assuming static incoming revenues (but we are expecting revenues will grow).

– We are aggressively trying to extend our runway with presentations like this<http://www.slideshare.net/mcmonahan/direct-response-on-facebook> targeted at specific customer segments, and up-selling current / past customers.

– We have meetings with our first enterprise subscription clients in the next few weeks, and hope to sign up a few for subscriptions that will cover burn and extend our runway.

– We have 372 unqiue ads accounts connected to the system.

– We are now open to the public and you can sign up for a trial for free at http://alphaboost.com — you must have Facebook ads attached to your account for the system to work.

– We have found a sweet spot at Search Marketing Agencies and are pursuing revenue generating partnerships.

* We are at an inflection point at AlphaBoost given the state of our product, scale, traction, expertise, team, and the macro opportunity.  I am currently pursuing a corporate transaction because I think we can make the economics work for everyone involved.  We are talking to several parties, and…

*We received a verbal acquisition offer today from a publicly trade company with a very strategic need for AlphaBoost. I will know more next week. Stay tuned…

* I have attached the collateral we are using to contextualize the acquisition (this is not for distribution).

Cross your fingers for me and the team.  We have worked hard and would love to put a big W on the board and money back in your pocket.

If we do not sell the company before April 1st, we will start to speak with investors about a Series A to ramp up our products and revenue.

Feel free to call me if you have any questions or just want to talk about the weather.

Thanks for your continued support, over and out,

That’s the thing about verbal offers. You should really wait until the deal is sealed before hanging out with friends like Mr. Thomas. 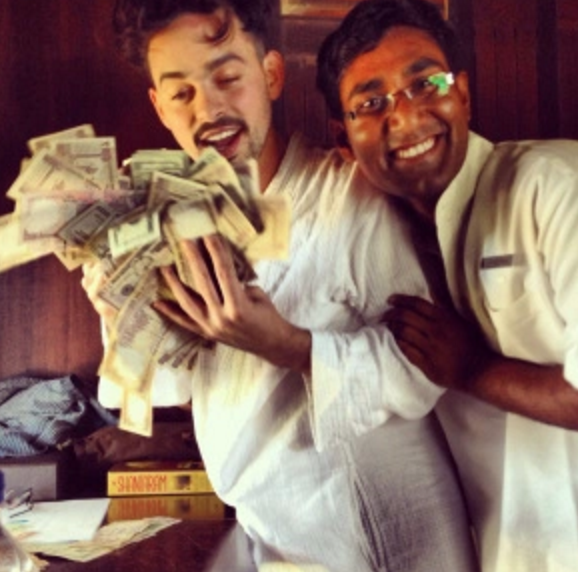