The second highest ranking Democrat in the Senate said today that U.S. Sen. Bob Menendez should keep the chairmanship of the powerful Senate Foreign Relations Committee, despite the controversy that continues to roil the political waters around him.

“Sen. Menendez has given us an assurance that there is no substance to these charges,”  Senate Majority Whip Dick Durbin said on NBC’s Meet the Press this morning.  Durbin refused to comment further because of the ethics investigation underway.

Menendez is under fire over his relationship with a major donor to his campaign.  According to news reports, the Senator from Hudson County has intervened with at least three federal departments on behalf of Florida eye doctor Salomon Melgen, a longtime friend of Menendez who has donated heavily to the Senator over the years.

The New York Times reported earlier this month that Menendez had pushed the State Department to intervene on a port security contract that a Melgen-owned company has with the government of the Dominican Republic.  A Washington Post report earlier this week said Menendez had sought clarification of results of a Medicare audit of Melgen’s practice – an audit that showed the doctor had overbilled the government by nearly $9 million.

Menendez also faces an ethics investigation over flights he took on Melgen’s private plane.  Menendez reimbursed Melgen for the 2010 flights, but not until ealrier this year.

Menendez has denied any wrongdoing.

An editorial in the New York Times printed Saturday called for Menendez to step aside from the chairmanship, at least temporarily, while the ethics investigation runs its course.

Durbin is the second high ranking Democrat to throw his support to Menendez. Earlier this month, Senate Majority Leader Harry Reid voiced his backing of Menendez. 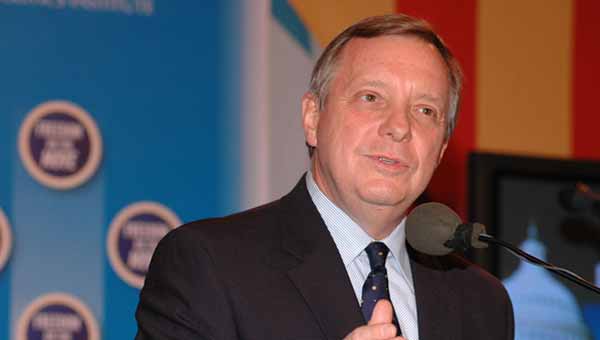