One of the great things about being a broadcaster on public television is that you get to interview fascinating public figures.  One of those politicians I was lucky enough to have an in depth conversation with was former New York Mayor Ed Koch, who passed away early Friday morning.

The interview took place in Ed Koch’s Manhattan law office.  I will never forget it, even though it was 20 years ago.  Koch was full of energy after his morning workout at the New York Sports Club in lower Manhattan.  He acted as if he wasn’t sure who I was or why I was there, even though his PR people had approved the interview in writing on several occasions.  He also acted as if he had little if any time for the interview, encouraging me by saying; “Let’s get on with it, Steve.”  But within minutes, it was eminently clear why Ed Koch was such a successful, engaging and memorable politician, not just in the New York Metropolitan area, but throughout the country.

During our one-hour interview (it was supposed to be only a half hour) Koch was irreverent and outspoken, talking on a range of issues, whether I brought up the topic or not.  I will never forget him taking on race and affirmative action, rhetorically asking why anyone should be judged based on any standard other than performance or qualifications.  Remember, this was while David Dinkins, who succeeded Koch as mayor, was being criticized by many circles for his performance as the City’s chief executive.  Koch also talked about his connection to New Jersey.  While he was born in the Bronx, he spent part of his formative years in Newark and graduated from South Side High School.  However, throughout much of our interview, Koch made it clear that he felt that New York was the dominant partner in New York / New Jersey relations when it came to affairs involving the Port Authority of NY & NJ, as well as tax policy for commuters who go back and forth across the Hudson River.  Koch was the quintessential New Yorker, implying that New Jerseyans were lucky to even have the opportunity to work in New York and therefore being taxed for this was some sort of privilege.

One thing he didn’t talk about in our interview, nor did I bring up, were gay rights or his sexuality.  He didn’t think it was anybody’s business, but it was clear that he had never really forgiven former New York Governor Mario Cuomo, or his son Andrew (now the governor of New York,  but then his father’s 1977 campaign manager in an hotly contested Koch/Cuomo mayoral race) for a much publicized incident.  While never directly tied to the Cuomo campaign, there were a rash of posters that mysteriously appeared around New York City saying; “Vote for Cuomo, not the Homo.”  In our interview, Koch didn’t offer much praise for either Cuomo, while never directly accusing either one of them for being responsible for that very hurtful campaign slur.  Interestingly, in a soon to be released movie about Koch’s life, he apparently doesn’t offer much praise for either Cuomo again.  Who says politics isn’t personal?

Koch had what so many of today’s elected officials are lacking.  I know it sounds like a cliché, but Koch had tremendous charisma.  It’s what Governor Chris Christie has in spades, even though he and Koch disagreed on many issues.  Of course, politics is about much more than personality, but Ed Koch had no problem telling you what he thought, whether you liked it or not.  He was in your face New York style, which is not that much different from Jersey-style.  Koch was brash, sometimes arrogant and loud, but also smart, thoughtful and could talk about Israeli / Palestinian relations as easily as he could talk about the Bronx, Brooklyn or Staten Island.

He was a fascinating politician.  An unforgettable character right here in our midst; a guy New Jerseyans were able to follow on television through New York media for the past 40 years.  Even if you didn’t always agree with him, he was always interesting and entertaining to watch, which is a lot more than we can say about the vast majority of those elected to public office these days who work overtime to figure out what their constituents want to hear.

Ed Koch will be sorely missed.  He was one of a kind.  I felt honored to sit down for that one hour of public broadcasting time with him.  It’s something I will never forget. Everywhere Ed Koch would go he would ask; “How am I doing?”  In the final analysis after 88 years, Koch did just fine.

What do you remember about Ed Koch?  Write to me at sadubato@aol.com or comment at Facebook.com/SteveAdubatoPhD 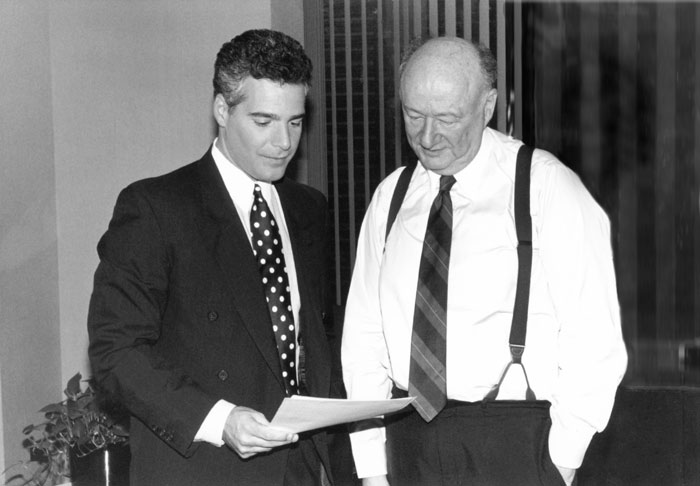