The rag trade has never been terribly kind to larger ladies. Plus-size women quickly learn where they can and cannot shop, as most clothing companies simply decline to do business above a size 14. And the bigger you get, the more doors slam shut. Entire malls must be written off.

And that’s just assembling enough clothing to cover yourself on a daily basis. Staying on trend can seem downright Sisyphean. Did you want one of those chambray shirts that were so popular this year? Well, don’t expect Vogue to help you find it. Either it’ll turn up at one of the handful of outlets that deal in fashionable plus-size clothing, or you’re just going to have to do without.

In short, it’s a wasteland. And traversing it is a series of humiliations.

But in recent years, a fashion-forward vanguard has emerged from the blogosphere to help shoppers of size navigate their limited options: women like Gabrielle Gregg, who pops up everywhere from MTV to InStyle, Marie Denee of The Curvy Fatshionista, an exhaustive guide to plus-size options, and Nicolette Mason, who pens Marie Claire’s “Big Girl in a Skinny World,” to name just three.

They’ve received write-ups in outlets like The New York Times, Teen Vogue and Refinery29. The phenomenon is often presented as a consumer uprising by stylish young women hungry for better options, armed with the self-confidence to demand more. What is often ignored is the radical origins of these “fatshionistas,” many of whom got their start in a LiveJournal community founded by an outspoken activist. And as this circle of bloggers coalesces into the nearest thing the plus-size girl has to Vogue, it’s worth stopping to note just how far they’ve come—and stopping to wonder how true they’ve stayed to their roots along the way.

Let’s rewind to 2004, when the options were even more dismal. Besides the uninspired, almost grandmotherly options at Roaman’s and Avenue, there was Torrid, the brand-new juniors’ store started by Hot Topic. But mostly, you were stuck with whatever Lane Bryant deigned to offer. And as this reporter can attest, there’s a reason they called it “Lame Giant.” In the mid-2000s, it was a sea of billowing button-downs and depressingly sensible workwear.

Onto this denuded landscape strode Amanda Piasecki, a graduate student in electronic music and media. As a fat activist nurtured in the “queer fat radical” subculture of San Francisco, she was looking for ways to organize her comrades in the fight against body-shaming and outright hatred of larger people. She was also sick of spending too much money on clothes that looked like crap.

And so Fatshionista was born, a place to commiserate and to demand better, but most of all to cope collectively. As Ms. Piasecki’s inaugural post explained, “We are silly, and serious, and want shit to fit.” Her goal, she told The Observer, was to “make people feel less alone in the daily work of being an embodied fat person.” No small thing, that. (In one early post, a community member talked about how she’d once shoplifted at Lane Bryant out of sheer rage: “I was mad at them for having a monopoly on the big girl clothes, mad at their crappy fabrics and construction.”)

The community grew quickly, at the runaway rate so common to tucked-away Internet phenomena. The definition of “fatshion” was a generous one, embracing goth and punk as well as traditional trendiness. The daily post count escalated; the flame wars commenced. New readers were showing up, wanting to get their fashion fill. Deluged with contributors and commenters, the tenor of the site began to tip.

Today, like so much of LiveJournal, the Fatshionista community is a veritable Internet ghost town. But many of the early community members have gone on to build major followings, which means that in the last couple of years, the marketers have come knocking. These bloggers now carry advertising and run sponsored posts on their sites, and they’re courted by brands eager for their imprimatur, which send them “review” clothes and invite them to events. No one’s getting wealthy, but it’s enough to support a shopping habit, and it makes for an excellent jumping-off point to bigger things.

Take Ms. Gregg, a Detroit-born, curvy 20-something with a big smile and an omnipresent pair of sunglasses. Her website, GabiFresh.com, which she considers a kind of “personal style diary,” is a river of beautifully composed snapshots of her outfits. It’s also a veritable encyclopedia of ways and reasons for plus-size women to break all the long-held rules about what they ought to wear. Horizontal stripes? Go nuts. Patterned pants? Why not. Bright colors? Fabsolutely.

Last year, she kicked up an Internet tempest by arranging a “fatkini” slideshow of herself and others for the website xoJane. By the end of the week, she was on the Today show, patiently explaining the concept of body acceptance to a slightly bemused anchor.
Ms. Gregg picked up some of the politics, of course—even today, she tussles with Twitter trolls who feel the need to educate her on the dangers of obesity, and in media appearances she’s quick to shut down any diet talk—but her preoccupation was always style.

“I was just there for the fashion, basically,” she said of her time in the LiveJournal community, adding that she was often frustrated, wanting “to see more trend-driven things.” And over the years, her blog has motored steadily in the direction of the mainstream.

In 2010, she chucked the site’s original name, Young, Fat and Fabulous. “It was kind of awkward and kind of weird to always have the word ‘fat’ associated with me,” she explained. It was impossible to mention her site at a networking event without detouring into the political backstory.

“I figured as long as I had the same body-positive image, it may actually reach more people,” she added. Besides, she never wanted to be the voice of the fat acceptance movement.

Like Ms. Gregg, many of the most prominent personalities got their start within the LiveJournal community, though you may or may not know that from their current politics. The up-and-comers, on the other hand—the gals posting casually composed selfies of their daily outfits, tagged #fatshion and #fatspo—are hardly old enough to have spent any time on the platform at all.

And while fat fashion blogging has cracked into the rarified world of the trend piece, fat activism is struggling. Sure, fat acceptance has caught on in feminist corners of the Internet like Jezebel and xoJane, and plus-size bloggers are a big part of that, but some members of the old guard remain skeptical: “It’s become this exercise in showing how much fat people can be like the mainstream so their worth is questioned less,” said Ms. Piasecki, “which I think is a ridiculous exercise. For me, the right pursuit is creating a new culture.”

This tension recently bubbled up in the form of a cri de coeur by Natalie Perkins, an Australian illustrator and blogger best known for creating a line of colorful necklaces that read “Fat” in proud, plump bubble letters. Once a fashion blogger, she excoriated the fatshionista-turned-commercial-icon trend last November with a piece on xoJane with the confrontational title “When Activism Gives Way to Advertising: How Fat Girl Blogging Ate Itself.”

“We’re stuck in a bubble and fooling ourselves by thinking that the anti-fat world is learning anything from fatshion,” she wrote.

There’s a lot less reason for plus-size bloggers to be mad at the mainstream nowadays, especially when all the incentives are on the side of playing nice. High-profile gigs are suddenly within reach. Brands court them with free clothing for review, offering an opportunity to serve the same function as traditional magazine stylists. Between the overtures and the increased availability of stylish clothing, “I feel like it’s effectively pulled the teeth that fatshion had,” said Marianne Kirby, a former LiveJournal moderator who stepped in as a leader once Ms. Piasecki left and one of the community’s more overtly political alumnae.

You begin to understand why younger bloggers would seek to distance themselves from their activist predecessors. Tiffany Tucker, a 22-year-old English major from Chicago, explained why she shifted her more fat-focused posts off her site Fat Shopoholic and onto a second blog: “I wanted for my blog to be taken seriously as a fashion blog. I’m a fashionable person, not just a fashionable fat person.”

Still, the frustrations that first inspired Ms. Piasecki to start Fatshionista are far from gone. Many designers still turn up their noses at the demographic; many manufacturers are cutting their clothes smaller than ever, leaving anyone looking for a size 4X or 5X stymied. It’s commonly the smaller bloggers who are the most feted in the fashion world. Looming over it all: there are still just a handful of outlets providing these newer options, and we could be one global downturn away from it all hitting the skids.

There’s one place and one place only this reporter is willing to buy tights, and if We Love Colors were to go belly up, it’s back to inferior, scratchy, stomach-creasing options—or going bare-legged.

Ms. Gregg admitted that she shares this frustration. She often struggles to find suitable items for her InStyle column on a magazine’s production timeline, because the most on-trend options are typically fast-fashion. “Big Girl in a Skinny World” seems to suffer from a similar problem. February’s column on lingerie relies heavily on bra-and-panty sets that top out at 2XL, which is about a size 20. That leaves a lot of big-assed lasses hanging. And really, what’s the point of a fancy bra if you’re stuck wearing mismatched panties?

Then again, the sheer existence of Ms. Gregg and her compatriots is not to be underestimated as a call to arms. “I had never, ever seen anything like that before,” Ms. Tucker says of her first encounter with plus-size bloggers dressed proudly in cute clothing. And it’s true: for every Melissa McCarthy or Beth Ditto, there’s a yo-yo dieting Jessica Simpson and a sneering Karl Lagerfeld, ready to remind you there’s no reason to bother. Every 20-something posting outfit-of-the-day shots is another foot soldier.

“I am glad that we are now living in this world where you can just be a fat person who likes pretty clothes,” said Ms. Kirby, reflecting on the progress made—and the distance left to go. “I guess the danger for the rest of us is letting it end there.” 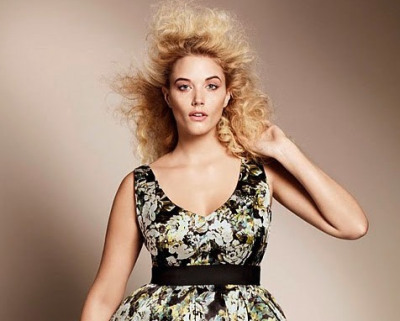