2/24/13: Governor Forced to Dress like Lobster to  Obtain  Endorsement of Monmouth  County Mayor

Democratic Mayor Dina Long threw her support behind re-electing Republican Gov. Chris Christie,  requiring  the governor  to, “dress up like a lobster and have his picture taken”  In order to receive her endorsement.  This is not the first time Mayor Long Has made an odd request of a Republican to get her endorsement.

“There is no time for Republicans and Democrats to bash each other in the name of party politics. I don’t want to spend the next six months being coy,” she said during the endorsement announcement at Woody’s Ocean Grille in Sea Bright.

Christie has visited Sea Bright four times since Sandy, in which  the Mayor  and the governor have developed a good rapport. At the last appearance in Sea Bright, Christie touted Long’s leadership and advocacy for the oceanfront town,  joking that she was able to get  “the governor  to agree to dress up like a crustacean… It was a choice of lobster or crab.”

Four years ago, in 2008, former  New York City  Mayor  Rudy Giuliani sought the endorsement of Mayor Long, and required him, “to dress up like Marilyn  Monroe… complete with blonde wig and makeup….and go out on a date with Donald Trump.” 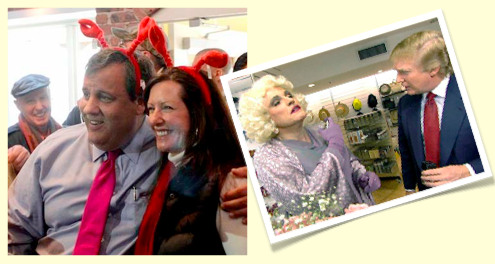