Nothing about 109 East Ninth Street screams secret art gallery. But then, a speakeasy wouldn’t install a neon sign reading “hidden hooch!” The façade of the five-story brick building, which may have been white at one point, is gray and graffitied. A bar sporting shamrock decorations dominates the bottom floor.

Call the gallery’s burner phone and the exhibiting artist will come down and open the door. These days it’s Daniele Frazier, who led the way up narrow stairs to an unmarked pewter-colored portal on the third floor. Inside is a bright, tidy room about a third the size of a subway car. This is SRO Gallery, an aptly named endeavor run by Patterson Beckwith, a founding member of the now-defunct Art Club 2000 (the collective’s work is currently in “1993: Experimental Jet Set and Trash, No Star” at the New Museum).

“This is a residential building; the landlord doesn’t know that this is going on, so we have to do all these work arounds,” said Ms. Frazier. An opening reception, for instance, was out of the question. Ms. Frazier has kept the installation simple, with seven abstract works on paper and a few ceramics—quirky vases in the shape of the Frankenstein monster’s head. Leafy potted plants live in the sink near the door and a couch covered in off-white canvas faces the fireplace, which is used for storage.

According to Ms. Frazier, about two or three people visit each day—some of whom are startled by the space. “People walk in and are like, ‘Oh, this is it!’” said the gamine Ms. Frazier from her perch on a red metal stool. “People have gone into the bar downstairs and asked, ‘Where’s the gallery?’ and the bar’s like, ‘What?’”

Ms. Frazier’s show is the second at SRO Gallery, which is entirely artist run. At the end of the previous exhibition, the artist handed Ms. Frazier the keys and the rest was up to her.

“If you think outside the box, there are so many ways to show your work. You don’t have to comply with the model of Chelsea,” she said. “This is by no means anti-Chelsea, but it’s making it happen yourself.” She said that while she has been offered gallery representation, it’s never been quite the right fit.

Ms. Frazier, who went to school around the corner at Cooper Union, somehow maneuvered a desk into the gallery so she could work while waiting on appointments. On her drawing board, an undulating pink and brown shape was beginning to emerge.

“People are basically getting a studio visit when they come to see the work, and I think that that’s an unexpected treat for a lot of people,” she said, adding that she hopes the space is less intimidating than a Chelsea gallery, where some people may feel unwelcome.

While it lacks the altar-like desk and aloof gallerina behind it, SRO Gallery is not exactly accessible. The space has a Facebook page, but it mostly advertises through word of mouth.

“You can have an empty feeling after having a show because it gets put up and then you don’t know who came or what people thought,” said Ms. Frazier. “There’s the classic story of artists getting depressed after having their exhibition and this is a way to prevent that. You just continue the conversation and continue the work during the show and the show is part of the work. I think that’s a way of being incredibly fulfilled by it.”

After making art, Ms. Frazier’s favorite activity is singing at spots like Karaoke Boho on Orchard Street with a group of friends including Mr. Beckwith, Danny McDonald (also of Art Club fame) and artist Trenton Duerksen. They’ll all be participating in an upcoming exhibition at BAM. The show, “CKTV,” which is partly organized by Cleopatra’s Gallery in Brooklyn, will kick off with a live karaoke event on April 3. In the meantime, call up SRO Gallery at 212-495-9307 before Ms. Frazier’s show closes on March 15. 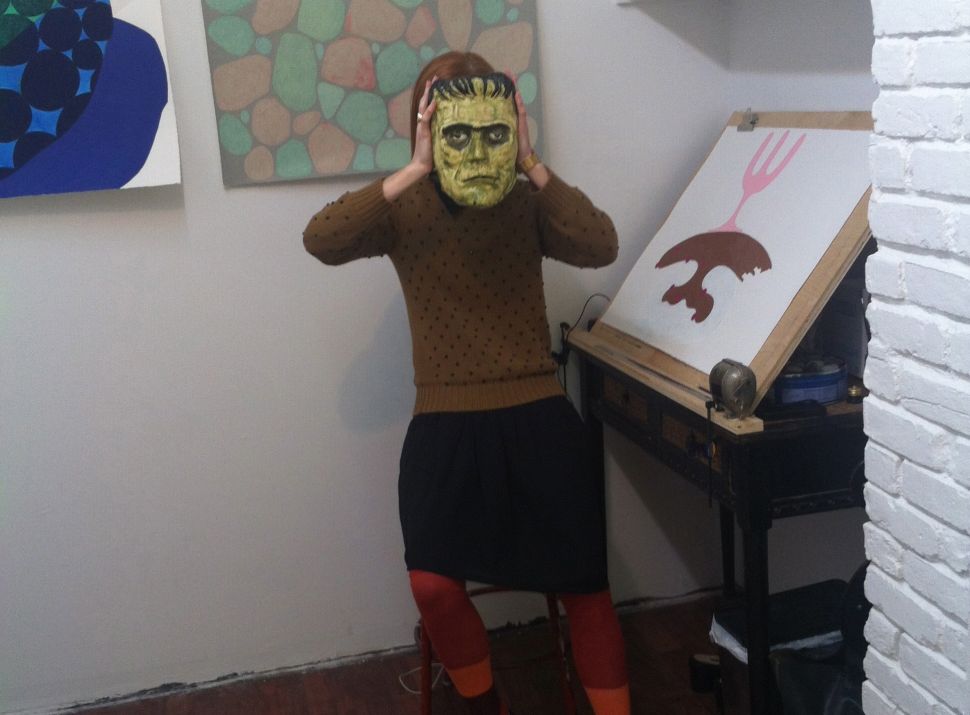