They say you can be assured of two things in life: death and taxes.

In New Jersey, we like to add a third thing to that list, which is essentially responsible for the first two: legislative elections where we already know the outcome and apparently don’t care.

Senate Minority Leader Tom Kean (R-21) and Assembly Minority Leader Jon Bramnick (R-21) did their best in Washington, D.C. last week to convince people that 2013 need not get hung up on “continuity of representation.”

Gov. Chris Christie’s coattails notwithstanding, we can, however, at least be guaranteed of the following:

We’ll be able to hit the snooze alarm on most districts;

Assemblywoman Gabriela Mosquera will attempt to be the first person on foot to attempt to break the sound barrier while knocking on every one of the doors in the 4th district;

Someone is sitting in a Garfield diner right now over a cup of coffee being told he needs to run against state Sen. Paul Sarlo (D-36);

“Because the people need me?”

And Norman Albert’s name will appear in the column opposite state Sen. Tom Kean’s (R-21).

Not to disparage incumbents in real dogfights this year, or diminish those who have won the hard way what they have. But two years removed from the backrooms of redistricting, we still crave those irresistibly elusive other contests, which will no doubt be supplanted by another year of predictable matchups with even more predictable results…

Four contests you deserve but won’t get

Insiders say the Hudson County Democratic Organization (HCDO) is in ruins because these two guys hate each other.  In the weeks leading up to 2010 legislative redistricting, HCDO Chairman Mark Smith convenes a secret meeting of all the municipal chairs and calls a unanimous vote. In the interest of preserving the party long-term, Democrats agree to work with Christie’s GOP short-term. But they act as stunned as everyone else when they exit the Heldrich Hotel wondering how the hell LD 31 and LD 32 ended up compressed. Enjoying the front row seats from Hoboken, Republicans remark that it’s the ultimate gladiatorial spectacle, as Sacco and Stack personally undertake a re-enactment of the “Last Train to Gunhill.” This is no longer “The War” that Hudson Dems continually boast about in which every toady’s a casualty and only the two masterminds on horseback escape unscathed. This is generals Grant and Lee, bloodied and in tatters, parrying and thrusting with sabers in a fight to the death as the confederate and union armies look on at parade rest.

Talk about an emboldened GOP wanting to slice the overly ethical Kean out of the statewide sweepstakes dominates the right wing blogosphere on the other side of redistricting. No one at first makes anything of a Union County Undersheriff’s Office vehicle sitting in Jon Bramnick’s driveway in the early morning hours before the final map emerges. But when his former running mate surfaces on an LD 34 primary ticket running off the line with Tommy Giblin, Lesniak bristles at any mention of the name “Joe Cryan.” Kean insists he wants nothing to do with the Elizabeth Board of Education, whose operatives stay underground in the primary amid rumors of massive voter registration drives in which BOE stalwarts switch their party affiliation from D to R. But coming up on the general election contest, the Senate minority leader gets that front office phone call telling him he needs to make the alliance happen. During grimy dockfront negotiations with Rafael Fajardo and company, Kean mentions that his last visit to Hudson County didn’t go very well. Fajardo and Don Goncalves exchange stunned looks. “This is Union County,” Goncalves says.  Lesniak similarly has little success trying to woo voters at a Clark Country Club. “Paris, it ain’t,” cracks the veteran senator, in a line mercilessly repeated over and over again on New York television as a counterweight to Ray Ray’s TV reruns of Kean v. Menendez 2006.

At O’Toole’s kickoff ceremony, he is tearfully introduced by “dear friend” Essex County Joe DiVincenzo. “Family is more important than party,” is the county executive’s pull quote accompanying the story. A fuming Codey forgets to notice that three-fourths of the people at his own kickoff are Republicans from Morris County. Handlers called in from out-of-state for the momentous clash tell the media to expect a contest “strictly on the issues,” and reporters are stunned when the race turns very ugly early. On a bunting covered balustrade on his way down from a stage arm-in-arm with O’Toole and Gov. Chris Christie, DiVincenzo is asked if he supports Democrat Barbara Buono for governor. The powerful county executive tells a fast scribbling press corps: “In the inimitable words of the late George McGovern, ‘I back her 1,000%,” prompting a fit of howling laughter from Christie and O’Toole. In response to the same question, Codey tells a reporter, “I could’ve beaten Christie.”

In a move later blamed on an overzealous low level Republican operative from out of town who “didn’t get the joke,” and thought Christie would actually welcome squashing together a Gloucester/Camden district, the new map pits little brother Don Norcross against towering labor leader Sweeney. In future years a PolitickerNJ.com photograph of Joe D. and Chris Christie with hands locked and heads bowed in prayer is incorrectly attributed to the moments immediately after the redistricting announcement that effectively dismantles the vaunted South Jersey Democratic machine. As his brother and childhood friend cannibalize each other on the primary trail, a scandalized George Norcross III blames the Republicans for “destroying Camden.”

(and four you don’t deserve but will get)

Linda Greenstein versus the former head of the Levittown, Pa. Chapter of the Daughters of the American Revolution

The Babe Ruth of Central Jersey politics, Greenstein has tormented the Republican bullpen to the point where the GOP goal in a gubernatorial election year is to simply not embarrass the governor when he makes his requisite campaign swing through the Golden Dawn Diner. Mercer Republican Chairman Rich Levesque as much as admits this in an off-the-record comment a cub reporter runs with in a story that ends up on the front page of The Trenton Times. As Christie’s campaign bus pulls into Hamilton, the GOP press releases proclaim what a great candidate Greenstein’s challenger is: a real private sector worker bee who despite the fact that she doesn’t have a real job, at least doesn’t have a government job. Enraged LD 14 public workers demand an apology from the Republican candidate, who, it turns out, escapes culpability by admitting that she actually still resides in Levittown.

State Sen. Dick Codey (D-27) versus the failed 2010 challenger for the chairmanship of the East Hanover Republican Committee

Badly bruised after receiving one vote in his unsuccessful bid to be the local GOP chairman, the no-name challenger promises to take the fight directly to Trenton. Commanding an impressive campaign warchest, Codey says he’d campaign, but is too bogged down with constituent service demands. Infuriated by the liberal media’s lack of apparent interest in the race, Codey’s Tea Party challenger goes on a very public rant against Essex County GOP Chairman Al Barlas, then vows during the campaign to run against Morris County Republican Chairman John Sette next June. His calls to Mike Agosta and Rob Hermansen in Bergen County go unreturned. At a Monmouth County fundraiser in his honor headlined by Anna Little and Christine O’Donnell, he’s the only person in the audience. Alienated and fed up, the challenger is publicly embraced by a very sympathetic Codey at a Seton Hall basketball game. The next day, the challenger drops out of the race and at a press conference in a Morris County hotel, endorses the former governor as the best choice for the 27th District. “I disagree with absolutely everything he stands for and his re-election guarantees my taxes will go up, but I like him,” the challenger says of Codey.

State Sen. Diane Allen (R-7) versus someone no one knows in Burlington County

The Western New Jersey media has a choice to cover this, or state Sen. Mike Doherty’s (R-23) primary challenge by an unfunded candidate who claims Doherty is soft on movement conservative issues. In any event, the 7th District starts in promising enough fashion as Assemblyman Troy Singleton (D-7) and Assemblyman Herb Conaway (D-7) undertake a series of friendly meetings in which each tries to persuade the other to challenge Allen. “You’re the senior guy here, you earned this, Herb,” Singleton tells the veteran. “Troy, you’re the rising star, the comer who will inspire a new generation; you’re the one to take on Diane,” Conaway counters. In the end, both incumbent assemblymen decide to run for re-election – and as far as possible from a former Bayonne housewife newly transplanted to Burlington County who, convinced of victory, commits to the kamikaze run against Allen.

The unknown challenger still nursing grievances from the 1980s begins his campaign behind bars after the mayor orders the chief of police to arrest him on allegations of false advertising – something about comparing Stack to Fidel Castro. Stack agrees to three debates, but shows up alone when his challenger has the interference of municipal court dates on the same nights. Publicly embarrassed and barred from entering a Nick Sacco event when he tries to find out if it’s true the public job won’t still be in the offing after the election, Stack’s rival gets the heave-ho from a Schuetzen Park bouncer who recognizes him from the mugshot that appeared on the front page of the Jersey Journal. An overwhelming 10-1 winner on Election Day, Stack throws a temper tantrum that night, demanding the arrests on criminal accessory charges of the 1,000 people who voted for the guilty defendant… er, challenger. 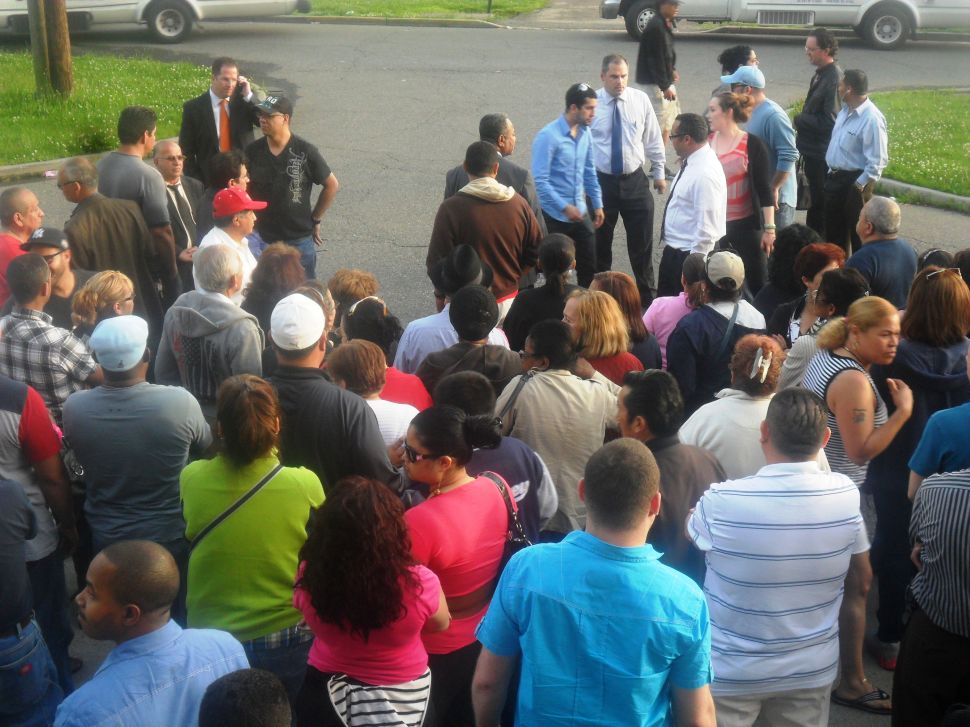