Steve Fulop’s new TV ad, featuring the Jersey City mayoral candidate plunging into the Hudson River, has the political world buzzing with comparisons of Fulop to everyone from Washington crossing the Delaware, John Kerry windsurfing in a wetsuit, Mike Dukakis in a tank and Aquaman.

Everyone agreed on the beautiful production values of the ad, produced by Mark Putnam of Putnam Partners. But the Submariner subtexts provided just enough opportunity for creative interpretation, starting, predictably, with insights from the campaign of incumbent Mayor Jerry Healy.

“Just like everything else Steve Fulop does, this commercial is all about Steve Fulop and not about the people he wants to represent,” said Joshua Henne, Healy campaign spokesman. “Then again, perhaps Fulop put on a wet suit to dive down and look for the missing emails showing him steering Board of Ed contracts to his political contributors – the very definition of play-to-play.”

The ad shows Fulop going headfirst into the river and then doing laps in the Hudson as his voice provides the narration to piano accompaniment.

“Some things aren’t meant to be easy,” says the mayoral candidate. “My parents were immigrants who owned a deli in Newark. I worked my way through college and made it to Wall Street. That’s where I was on 9-11 I volunteered for the Marines, went to Iraq. When I got back I ran for Jersey City Council against the political machine and won, passed the toughest ethics laws in state history. I’m Steven Fulop and some things aren’t meant to be easy.”

One insider, who is not connected to either campaign and who spoke to PolitickerNJ.com on condition of anonymity, pinpointed the ad as an odd choice for Fulop, who doesn’t have the populist image of his opponent Healy.

The ad, the insider said, reinforces Fulop as a loner.

“If the idea is to show Steve Fulop as a fighter, then the ad should show him with the people of Jersey fighting, as a fighter who’s connected – not Aquaman,” said the insider. “This ad will get talked about but I’m not sure in the way people want. This is the ‘I am not a witch’ ad, reinforcing those things that people are most skeptical of. Christine O’Donnell’s ‘witch’ didn’t defuse the perception of her as strange, it ignited it. There are doubts about Steve Fulop as a Wall Street guy from downtown. Half the ad highlights New York and the other half shows the downtown area that many Jersey City voters are skeptical of. I don’t know about that.”

“It’s beautifully executed, and not a typical political ad, so I give them credit for thinking out of the box,” Swibinski said. “But the ad does nothing to speak to the candidate’s interpretation of the life and goals of the average Jersey City voter. This ad establishes him as unique and dedicated to charity, a dedication that puts him, frankly, outside the range of the typical voter – even outside the life of the average Jersey City newcomer. No one sees themselves crossing the Hudson for charity. Having said that, I don’t know what their polling shows. Maybe the polling shows the voters want someone who is unique and different. There are approaches I intuitively wouldn’t take, and I would think you would want to make him more of a common guy. The ad surprises me.”

Both Swibinski and the anonymous insider agreed that Fulop’s second TV ad release today presents a more conventional message: the candidate talking to young school children about city violence and his commitment to public safety.

“That’s the most important issue on people’s minds,” Swibinski said.

Another source said to the extent that the unique Hudson County River ad creates buzz, it helps the challenger Fulop.

“For lack of a better word, Steve has to create a splash,” the source cracked.

“It’s beautifully produced egocentrism,” Politano said. “The images don’t match the rhetoric. You’re hearing this story about an immigrant family and watching a man swim in the river. Buzz is terrific but it has to connect with voters, not the chattering political classes.” 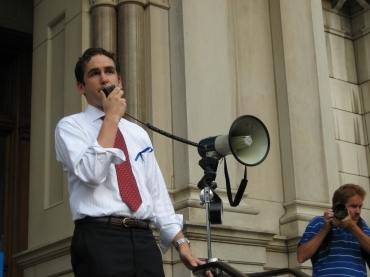