JERSEY CITY – There was a crowd at the Casino bar and a man, an insider and obvious devotee of the Healy Campaign, collared PolitickerNJ.com and with the big, exaggerated, woeful, scrunched-up grimace a  part-timer filmgoer makes to a movie critic, said, “Maybe you know – what the hell was Steve Fulop trying to say in that ad today?”

It was a much-voiced question at this well-attended fundraiser for incumbent Mayor Jerry Healy, who’s facing downtown City Councilman Steve Fulop in the May nonpartisan election.

“Steve’s ad reminded me of that John Kerry windsurfing spot,” said another Healy backer, grinning above the neck of a beer.

It was turning into one of those moods where one half expected someone to unsteadily climb up on the bar amid laughter and attempt to re-enact the scene in Fulop’s ad where the councilman dives off the pier into the Hudson River.

A bass-heavy 70s groove semi-buckled the glass panels as the big crowd found their seats amid blue and yellow balloon finery, the individual spectacles of their buffet selections piled high on the round tables.

“I don’t want to move on to be a congressman or a senator or a state senator or governor,” said Healy, squared off at the microphone on the elevated stage. “I’m going to stay here.  You can’t say that about our opponent. He wants the title of mayor but not the job. He wants to use the job as a stepping stone.”

Healy and the men around him are playing the well-heeled roles of local stevedores, ironworkers, firefighters, school administrators and cops prepared to administer the outsider brand to Wall Street wiz turned City Councilman Fulop.

It’s theater that suits an audience of public workers,  many of whom – including City Councilman Charles Epps  – fit the bill themselves as the bearers of those specific titles, in Epps’ case a former superintendent run off the public payroll by Fulop’s allies on the School Board.

“Casino in the Park,” Hudson County Executive Tom DeGise mused. “It’s like when the Celtics play the Knicks in the Garden. Here we go again. This is going to be a big one.”

DeGise mentioned two polls in the field – one associated with Healy and another with Fulop – asking what he identified as legitimate questions, a sign of a tight contest.

“This will be a really good race that will go to the campaign that is best able to identify its voters,” DeGise said.

He cracked a grin.

“I’m very proud to be old Jersey City,” he said.

So was Healy, who reminded PolitickerNJ.com that he’s lived his entire life in the city, and then moments later onstage was reluctant to wrap himself in the old-timers’ mantle.

“We’re reaching out to all voters,” said the mayor, moments before inviting his running mates to stand with him onstage, a diverse group of mostly Blacks and Latinos.

“He’s the right man for the job,” said Hudson County Democratic Organization Chairman Mark Smith, the mayor of neighboring Bayonne. “I have no personal animus toward Steve Fulop, but this man works you day in and day out. Jerry Healy is Jersey City. And Jersey City – next to Bayonne – is the place to be.”

At the end of it, a bagpiper walked on and played through sustained applause.

A Fulop insider from afar noted with glee the mayor’s play for votes beyond the structures of patronage politics, arguing that Healy won’t be able to pinpoint and pull a wider range of Jersey City voters.

“We’ve been at this, organizing in a very targeted way, for six and a half years,” the insider said. “They’re right that the race will come down to who can get the vote out better, which signifies progress on their part from the days when they dismissed us as guys who couldn’t get out of downtown.”

As for the bar buzz at Casino in the Park, “They’re talking about us, reacting to us – a lot,” the Fulop ally added. “And that’s good too.” 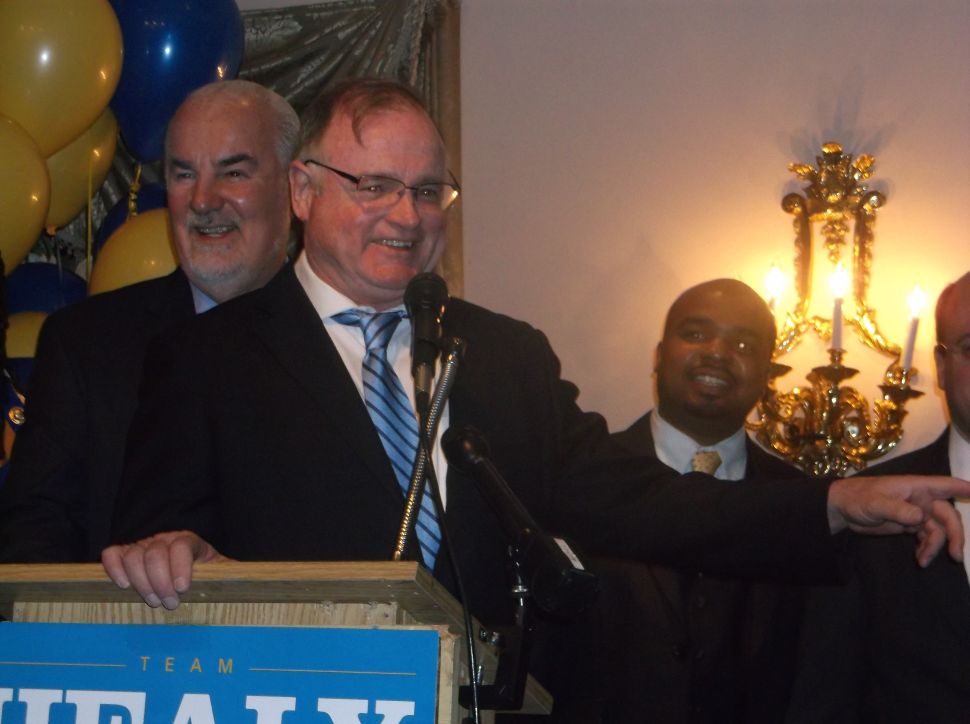