Jersey City Mayor Jerry Healy, facing accusations that his campaign sought to circumvent campaign finance rules at a fundraiser Wednesday, is returning all of the money raised at the event.

Josh Henne, a spokesman for the Healy campaign, said though the campaign “always follows both the letter and the spirit of the law… Healy has already instructed his finance team to return any money raised last night.”

The invitation asked supporters for a $1,000 donation and gave the option to donate directly to the Healy campaign or to “For New Jersey Families,” an independent expenditure committee.  The invitation clearly outlined that donating to the committee meant “no limits – no pay to play.”

Under campaign finance law, independent expenditure groups may not coordinate with a campaign, said state Election Law Enforcement Commission Executive Director Jeff Brindle, who was speaking generally and not about the specific fundraiser.

The group was formed Jan. 30 by Rich Torraca, a state Democratic operative.  Torraca did not return a call or email for comment.

Early Thursday, Henne said the campaign had no knowledge of the invitation.  Later, he issued a statement saying the money would be returned.

Healy is known to have attended the fundraiser and the invitation  has the required “Paid for by Team Healy 2013” line. 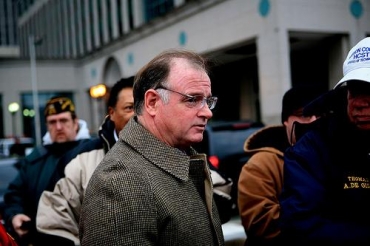