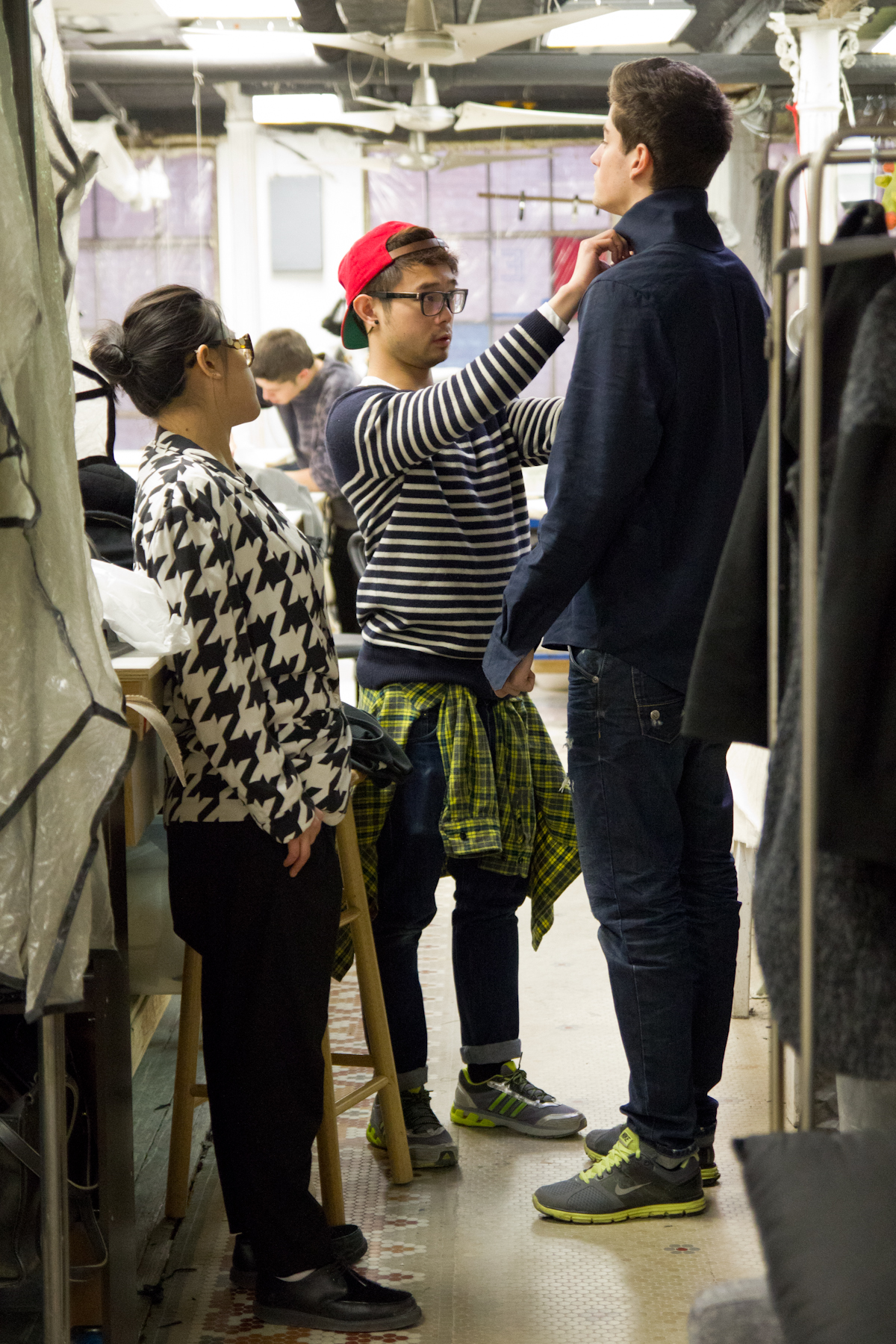 ‘We’re looking for a more mature rock star,’ he says of the Asher Levine image. 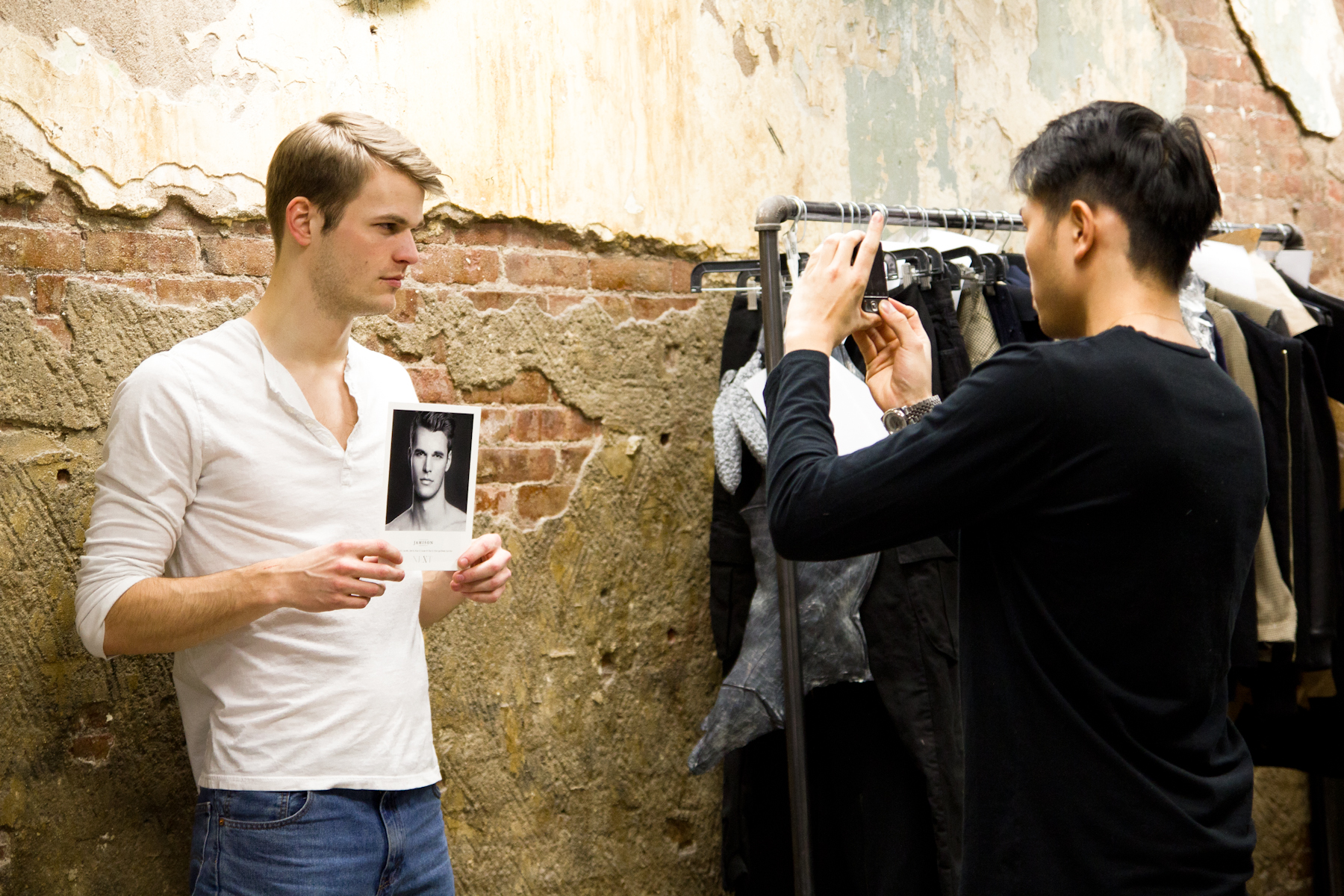 ‘There’s no sympathy in fashion,’ he joked as he prepared piles of photos to fit into Levine’s four brand ‘identities’... 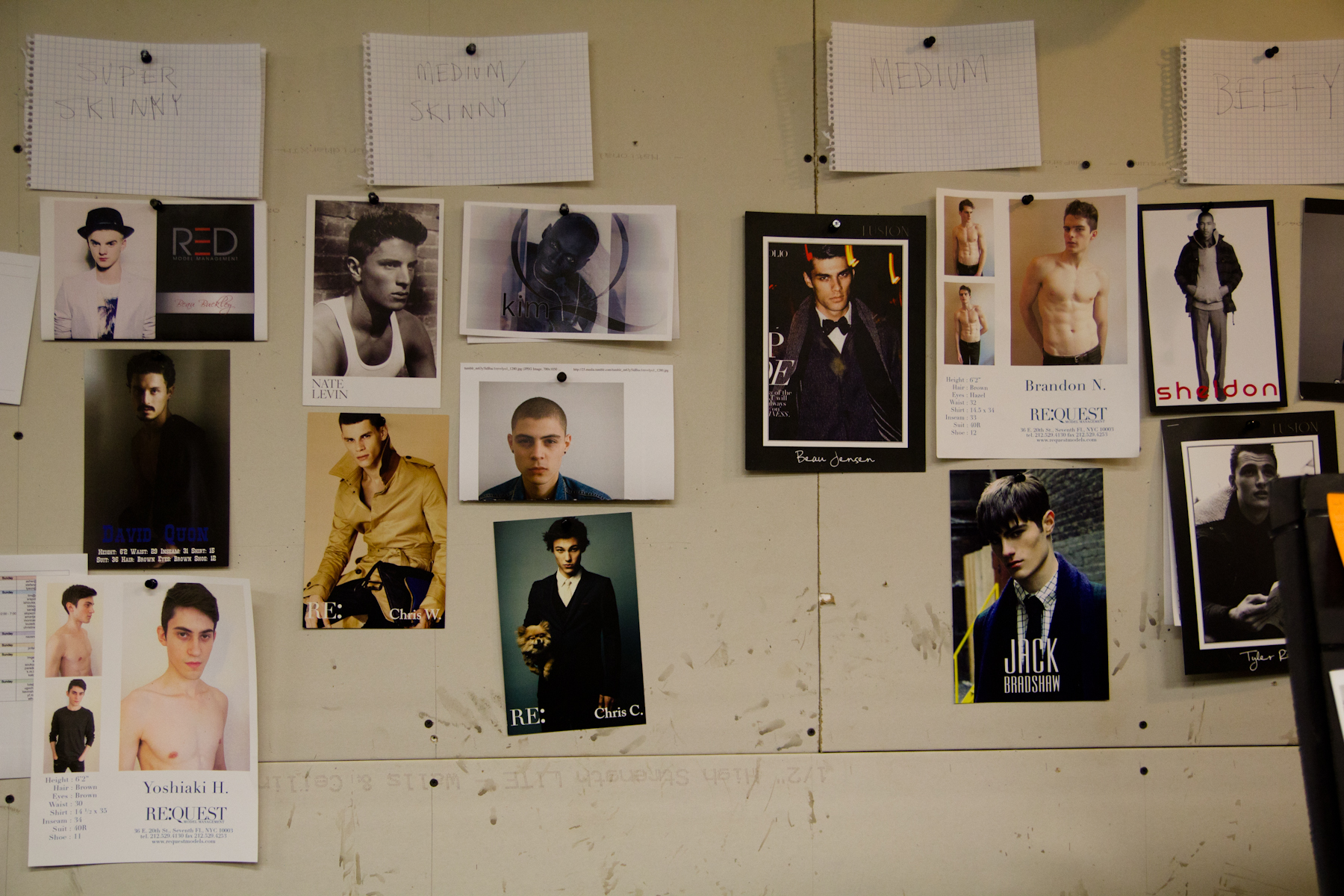 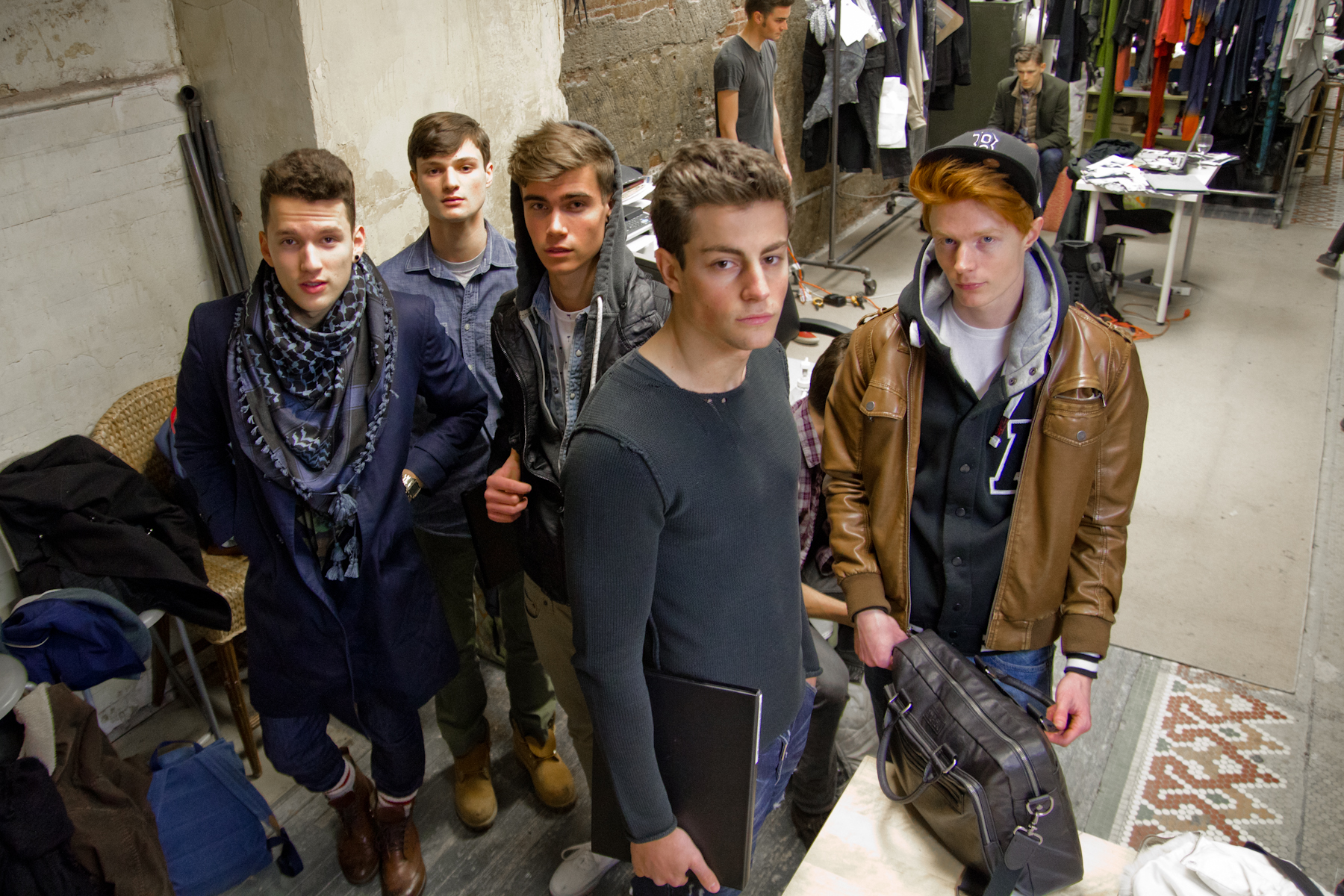 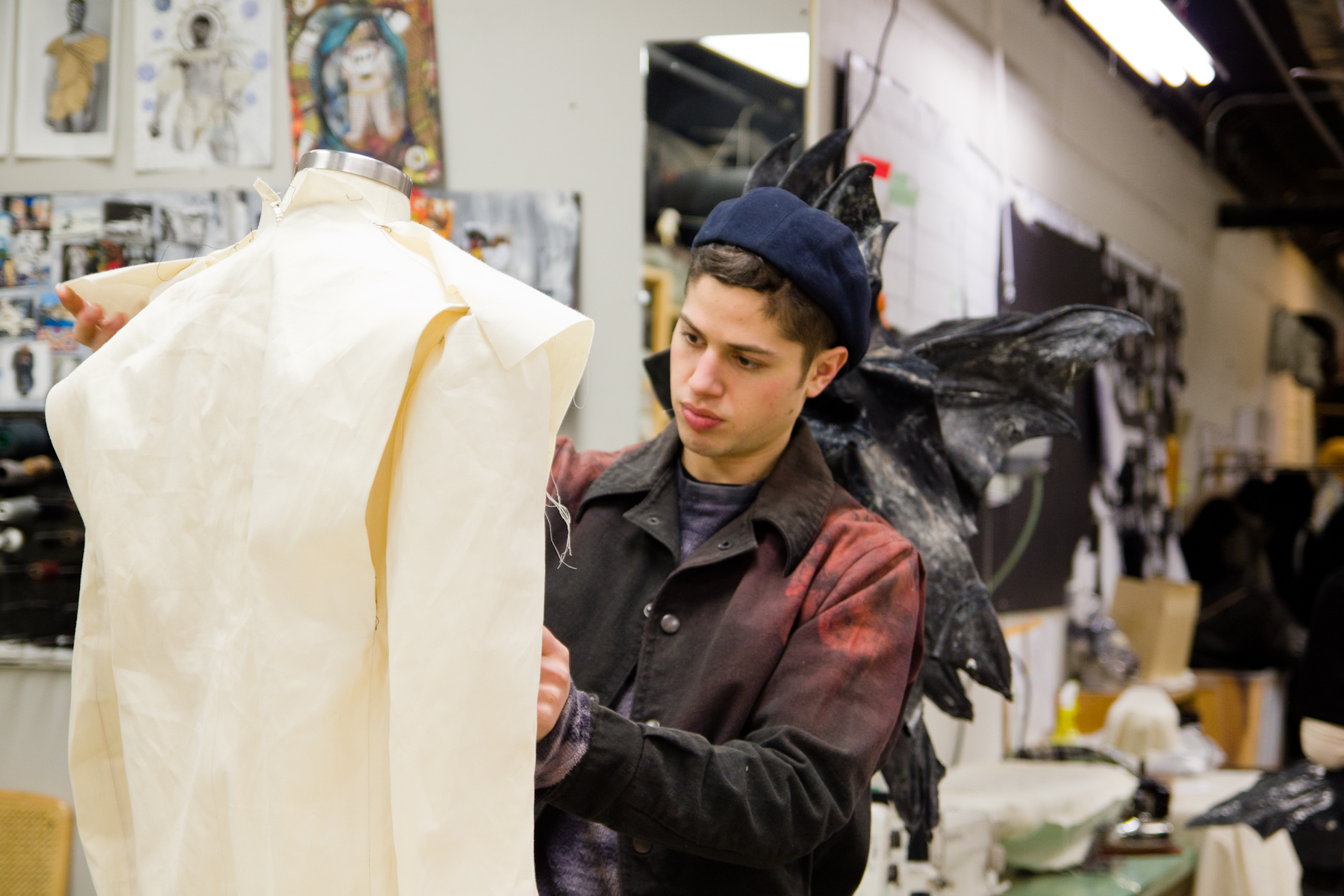 ‘We’re going for a more refined, tailored look this season,’ Mr. Dejsiriudom, who designs the clothes with Mr. Levine, told us. 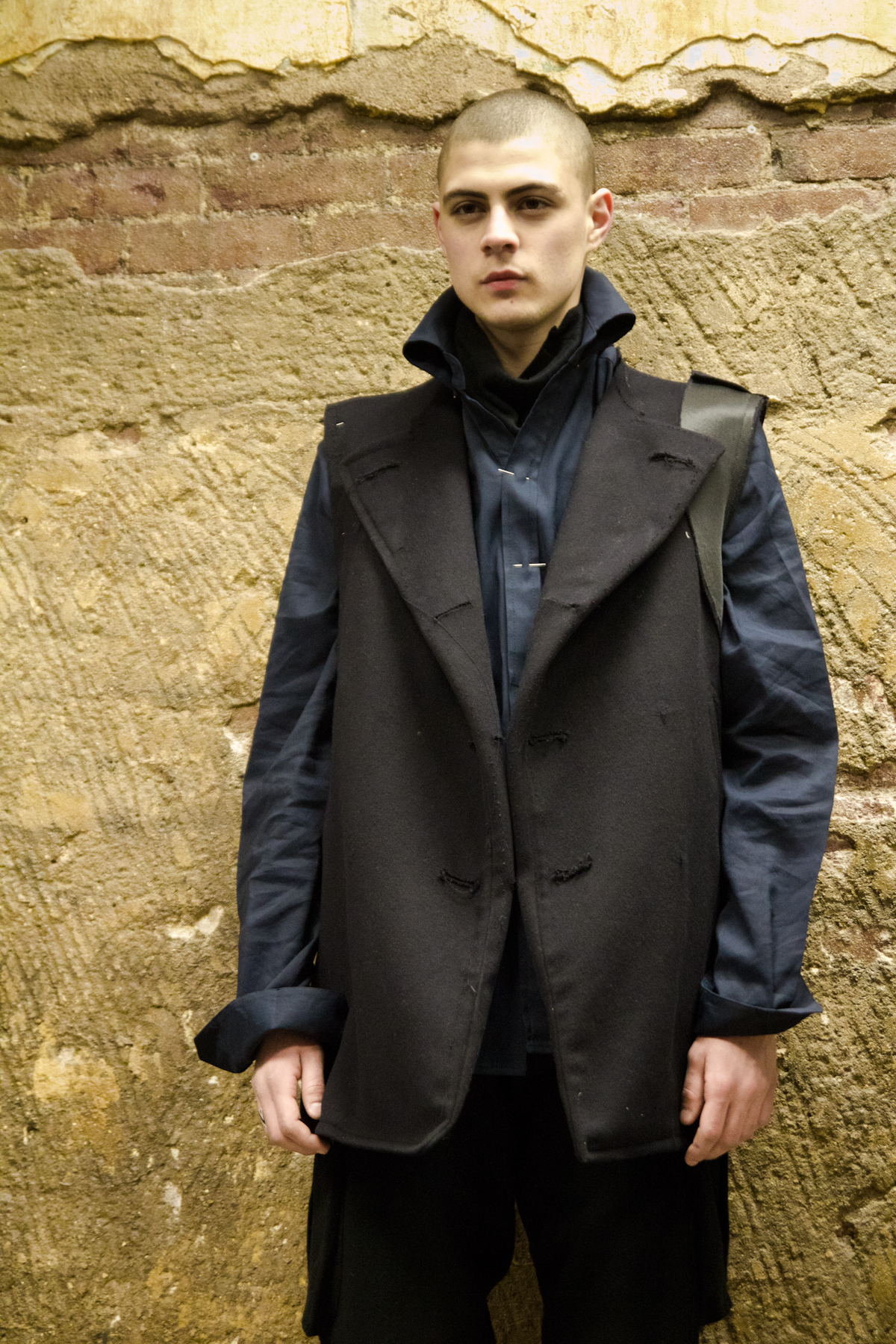 ‘He’s creating styles for men that push the envelope but that can actually be worn.’ 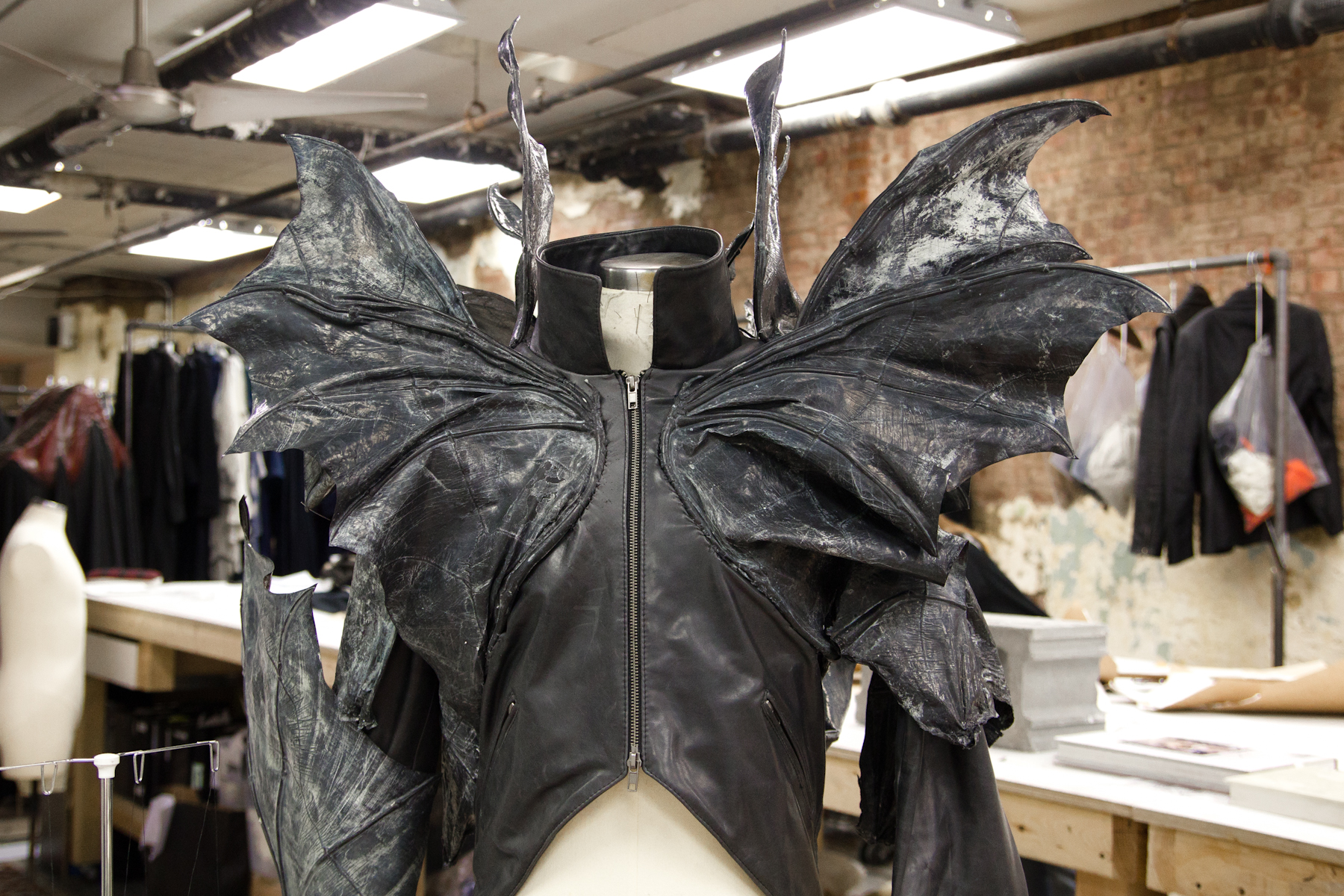 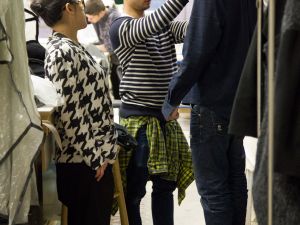 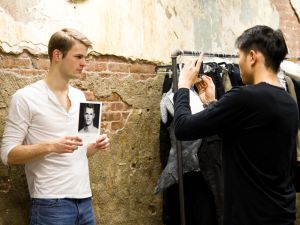 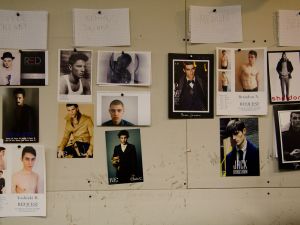 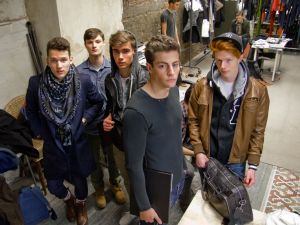 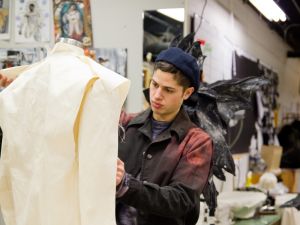 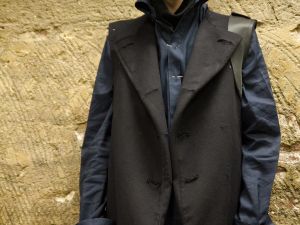 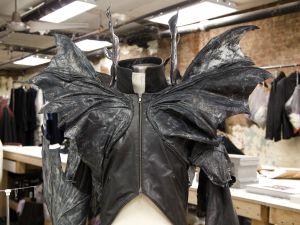 It’d be easy to confuse Asher Levine’s Tribeca basement studio for a special effects laboratory rather than the work space and showroom of one of Hollywood’s favorite emerging menswear designers.

Inside the door stands a cloaked and hooded figure in a red-ribbed death mask. Farther back, there is an assortment of horror-movie ephemera hanging from the ceiling and lying in glass cases: skull-shaped caps, rubbery monster gloves and a gigantic mold of what looks like a tyrannosaurus egg. In the middle of the room, veined human-size bat wings bloom out of slim leather jacket, a grotesquely beautiful Alexander McQueen vision in polyurethane.

On the Tuesday before New York’s Fashion Week, a group of young men joked around in the studio, taking off their clothes to show off tattoos and abdominal muscles. Unlike their female counterparts, these models come in varied sizes and ages: there was a 6-foot-4, soft-spoken Channing Tatum lookalike who was only 16, a 38-year-old with a grizzled two-day beard and a meaty build, and the emaciated blond Beau, who resembled Pete Doherty as rendered by Larry Clark.

“Don’t let anyone tell you that girl and boy models are the same,” explained one hunk. “We don’t have eating problems, and we know that you don’t mix Adderall with Molly.” (Molly is a pure form of the synthetic drug Ecstasy.)

Half the models claimed to know the downtown designer personally, even as Mr. Levine—a 24-year-old who could be a model himself, discounting his height—slipped into his studio unnoticed and walked right past them.

In the past three years, Asher Levine has risen to cult celebrity status, or at least to cult status among celebrities. His costumes have been worn by the Black Eyed Peas, Bruno Mars, the Scissor Sisters, Jared Leto and, most famously, Lady Gaga, who was chicly adorned in Mr. Levine’s straitjacket-inspired dress during a 2010 paparazzo clash and poured into a Levine-designed post-apocalyptic black rubber body-hugger in her “Marry the Night” video.

Mr. Levine began his label by using himself as a sandwich board, biking around the West Village in “the most outrageous leotards and wrestling singlets of neon colors,” recalled artist Slava Mogutin, a friend and collaborator. The flashy costumes were unconventional, but his ambitions were not.

Mr. Levine graduated from Pace University with a degree in business management in 2010. Unlike many young designers who find themselves in debt and adrift before attaining commercial success, Mr. Levine is very mindful of his bottom line. He has exceeded his own projections by 50 percent each of the last three quarters, despite continually pressing his figures higher. Fueled in large part by his celebrity following, he’s gone from being a one-man design shop to overseeing approximately 35 employees, including head of production Tim Dejsiriudom and communications director Stefan Golangco.

Being business-savvy isn’t the worst thing for a designer. His company is contractually obligated to keep investors updated on emerging technologies and their possible uses in fashion. Mr. Levine writes these reports himself, along with his company’s quarterly projections. Since most of the money comes through custom designs and celebrity clients, Mr. Levine and his crew will look for the release date of a previous client’s new album—the designer gave will.i.am as an example—and plan on making something for the tour. While he also has an online store featuring bespoke creations, Mr. Levine does not currently have a ready-made line.

“We’re selling a lifestyle,” The Observer was repeatedly told by Mr. Levine, as well as by Mr. Golangco and Mr. Dejsiriudom. And though the lifestyle in question has been branded “rock star” by the team, it may as well be “futurist.”

As absurdly impractical and theatrical as some of his high-concept costumes may be, the idea behind them is a sort of 21st-century functionality. For example, Mr. Levine’s next line will feature microchips embedded in the clothing. The chip will be linked up to its owner’s cellphone, and in case you lose one or the other, you can either call your jacket or trigger your trousers to make the items beep until they are discovered.

“Imagine … you’ll never lose your phone again,” Mr. Levine proudly told us. He’s working with the software company Phone Halo to develop the project. Later, Mr. Golangco would describe the microchips as a way “to never lose a piece of Asher Levine clothing.”

Mr. Levine’s theme this season is “theatricality,” an apt description for a floppy vest-and-pants combination made out of black silicone and a neoprene compound. (“It’s kind of like a wet suit,” Mr. Levine admitted.)

Inspired by one of his friends, ’80s power-ballad rocker Jim Steinman, this season’s show—set in the MMAC studio on West 60th—is a twist on the lyricist’s classic “Total Eclipse of the Heart.” Mr. Levine hired a animator to come up with 3D graphics for the show’s intro. And if this all sounds a touch melodramatic, you should have seen the fall show.

“Last season, we held the whole production on a yacht off the pier,” Mr. Dejsiriudom, a small, stylish pixie boy, told The Observer. Turn around, bright eyes.

The season before that, Mr. Levine tapped into the then-unheard-of trend of 3D printing, with models sporting eyewear from MakerBot. The founders of the additive manufacturing company were in attendance along with their machines, and after the performance, audience members were encouraged to go up and get a tutorial on the cutting-edge technology.

On Saturday evening, the basement studio was unusually quiet for a fashion house three days before showtime—the Asher Levine show was slated for Tuesday night at 7 p.m.—and though people kept paying lip service to how “insane” everything was, the subterranean experience was almost cozy.

Mr. Levine was unperturbed when he found out that instead of 12 looks for the show this season, stylist Andrew Mukamal had mixed and matched the outfits—which ranged from a wool sweater inlaid with rubber diamonds to an oversized cape with an unusually large, stiff cowl—to a final 16.

“Oh,” said Mr. Levine, sporting a homemade tie-dyed terry sweater that he would wear all week. “That’s really great.” Mr. Golangco was less pleased, as he now had to find at least two more models.

Pizza and Thai food were ordered, the interns dyed denim in giant vats on the stove and the DIY dynamic was palpable: everyone pulling together to create a large artistic experience. The scene could have taken place in Bushwick, except for the fact that no one was worried about bedbugs.

Expected at the show was the eclectic mix of VIPs, trendsetters and fashion journalists who have become part of Levine’s fan base. Angela Simmons, rap star Waka Flocka, skate star Johnny Weir, fashion editor Eddie Roche, luxury lifestyle consultant Jesse Garza, Bruce Pask and Jason Rider of T Magazine. Longtime fan and friend Jared Leto isn’t on the list for this season’s show, but he has been in the front row for seasons prior.

Fataah Dihaan, creative director of the art video website ARCADE 44, spoke of Mr. Levine’s following: “Sure, you’ll see Jared Leto at the shows, but then there’s those kids on the club scene, they’re constantly wearing Asher Levine. They’re creating trends in the social/nightlife scene, and those kids have their pulse on what’s going to be next.”

For Mr. Levine and his crew, “next” means looking toward how they plan on selling their product. “We’d love to get into a high concept store like L’eclaireur in Paris, or Barneys, or I.T. in Hong Kong,” Mr. Dejsiriudom told us. “All the high-concept stores.” Mr. Levine also told The Observer that he’d like to see his line sold on Fab.com.

“All these online stores, that’s the future,” Mr. Levine said, returning to his bat jacket, which had spouted six new wings since we first arrived. “That’s where a lot of emerging designers should be looking.”