The news today of U.S. Sen. Frank Lautenberg’s (D-N.J.) decision not to seek re-election reconfirmed that, although Holt was not ready tonight to say he is definitely running.

“There’s no point in being coy,” Holt said. “I’ve made no secret in previous years that I would consider the Senate at the right time. But an expression of interest should not be taken as a campaign announcement.”

Holt has long nursed aspirations to go to the upper chamber. His father, Rush Holt, Sr., served as a U.S. Senator from West Virginia.

First elected to the Congress in 1999, Holt blasted his way into a Republican district, working it into a Democratic Party stronghold in the years since. He has a reputation for running strong, organized campaigns.

His professorial Princeton University demeanor belies a zest for politics and competitive, sharp-elbowed skills, on display during his 2010 staredown of venture capitalist Scott Sipprelle at the height of Tea Party backlash.

“Rush would be the candidate who could best make the case that he’s run and won against Republicans,” said a Democratic Party source.

The veteran congressman’s competitors for the seat are likely to include Newark Mayor Cory Booker – who is running – and Holt’s fellow congressman, U.S. Rep. Frank Pallone (D-6).

Senate President Steve Sweeney (D-3) hasn’t ruled out a 2014 run. Assembly Speaker Sheila Oliver (D-34) has likewise toyed with the idea of running but her benefactor, powerful Essex County Executive Joe DiVincenzo, is already on record in support of Booker for U.S. Senate.

On the heels of Newark Mayor Cory Booker’s announcement that he intends to explore a 2014 U.S. Senate bid, Essex County Executive Joe DiVincenzo said Booker could count on his support if he chooses to run.

“Frank Lautenberg is a great senator,” DiVincenzo said of Lautenberg (D-NJ) last year. “But if Cory makes that decision, there is no question I would support Cory Booker. He would do an outstanding job representing New Jersey. He would be at the top of the top 100 because as a national star he would move up very quickly. We would have Cory Booker and Bob Menendez. How can you do better than that?”

Today, Holt paid tribute to Lautenberg in a statement, emphasizing the particular gratitude he feels for the retiring senator’s work on gun violence.

“There is no one in New Jersey history quite like Frank R. Lautenberg,” the congressman said. “He is a true champion for New Jersey, an effective advocate and skillful politician, and someone who has never forgotten his roots or the valuable role that government can play in helping people. It is a privilege to continue working with Frank on so many issues, from preventing harassment in schools to promoting research and development to keeping our trains and buses safe. As Frank has said himself, much work remains to be done over the next two years.  In particular, America will be a safer and better place when more in Congress listen to Frank’s longstanding, relentless, and passionate pleas to stop gun violence.

“Frank remains a terrific friend to New Jerseyans and to me,” the congressman added.

If Holt were to get in the contest to succeed Lautenberg, he would conceivably face a rival advised by one of Holt’s former inner circle consigliere’s: Mark Matzen, now a member of the Booker Team. 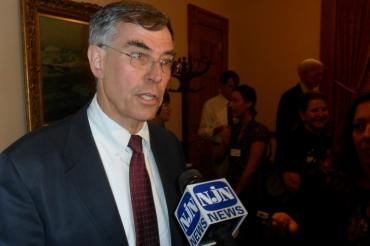