NORTHFIELD – Having watched their candidate survive arguably the most tortured campaign of the 2011 season, the allies of state Sen. Jim Whelan (D-2), Atlantic City, feel the weathered Atlantic City brand name deserves an easier jog around the track this time.

The coming contest likely won’t be easy either for the incumbent, however, as Republicans are energized with GOP Gov. Chris Christie at the top of the ticket and a hungry challenger in Atlantic County Sheriff Frank Balles.

Like Christie, the battleground bound Whelan finds cross-the-aisle allusions useful in an election year. “The last thing we need is more of this partisan bickering,” he told the crowd at this afternoon’s formal campaign launch.

“I would love to run a campaign based on my record and ideas,” he said. “Unfortunately, I don’t think that’s going to happen.”

“Someone who works a 40-hour work week ought to be able to live above the poverty line,” said the senator. “You’ll hear the Republicans saying again what they said when we passed Paid Family Leave, which is that we will hurt business. They’ll use the same exact argument.”

“Another difference is a woman’s right to accessible and affordable healthcare,” he said, and what he identified as his party’s focus on working class issues instead of “just the top one percent the Republicans seem to care about.”

Elected to the Senate seat in 2007, Whelan did some soul searching this time before deciding he wanted to run for re-election. It’s not like when he was a young councilman, he says, and just jumped into a campaign without considering the consequences.

“Whatever it takes,” Sweeney added moments later when PolitickerNJ.com asked him what he intends to spend to ensure Whelan gets by Balles.

“He’s like a junkyard dog, who hung on until the governor signed the internet gaming bill,” Sweeney told the small but determined crowd standing and sitting in the local American Legion Post here in this working class burgh.

A sign with the words “Senator James Whelan” was tacked to the paneled wall and guests balanced plastic plates and ate submarine sandwiches.

“People talk about the bosses,” Whelan said gruffly when he stood at the podium.

There was an edge in the room – then the senator softened the blow.

“By wife is signed onto the campaign,” he said. “She’s my boss.”

The swim coach and former mayor of Atlantic City – who can’t escape media references without someone making the point that he was the last mayor who survived his tenure without being hauled off in handcuffs or run out of office in disgrace – spoke briefly to the small crowd.

“I am here to announce my candidacy for re-election to the Senate,” the Democratic senator announced to applause. “I’m also here to ask for your help.”

Whelan said he and Russo and Mazzeo will go before the delegates of the Democratic Committee on March 23 to ask for their support. “As a team,” he explained. “And we’re going to need your help into next fall.”

Contacted for comment, Balles said he agrees with Whelan that the contest should be waged on their records.

“I hope this race can be run on our records,” said Balles, a former family sub shop owner who opposes a minimum wage hike.

“I agree with the governor,” the Republican sheriff said.

He added, “I want the public to see the difference between Jim Whelan and myself in terms of fulfilling campaign promises. During Jim Whelan’s time, Atlantic City has gone backwards. I was at the budget address. When Governor Christie spoke about rebuilding the shore, Senator Whelan sat in his seat with his head down. That’s not working together. He was one of the last people to stand up – and he’s a former lifeguard.”

For all that, Balles said he doesn’t believe the next months will turn as sour as Whelan v. Polistina.

“I’m a very positive person,” said the sheriff. “It’s going to be about the issues.”

Speaking to reporters at his kickoff as supporters milled, Whelan said as much as he wants ideas to dominate the coming eight months, he believes it’s wishful thinking.

“It just seems politics takes that goofy turn,” he said. “That’s the way we do the dance.” 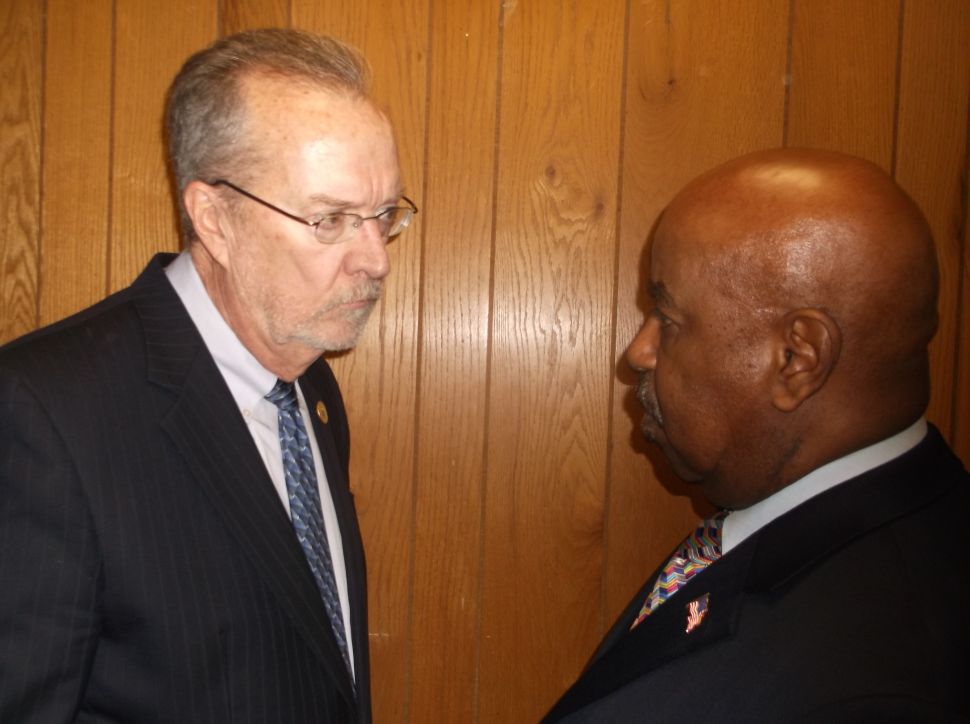