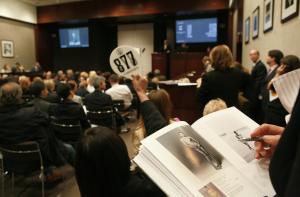 Hey, do you feel like the art world is upside down? In her disco standard “Upside Down,” Diana Ross sings about how her boyfriend is unfaithful, but she looks the other way because “no one makes me feel like you do.” Unlike Diana, I’m not comfortable when things are upside down, and I never look the other way. New year, new beginning, time to think about what doesn’t make sense. Here are just a few of the sundry art-market realities that just don’t add up.

The first thing that comes to mind is an inversion of the spread between the primary and secondary markets. Throughout most of the last decade, a collector could buy “primary,” i.e. fresh-from-the-studio-to-the-gallery, artworks by name-brand artists at attractive prices. Up until 2009, you could buy them for a dollar and then theoretically sell them at auction for two, or three or more (adding a few zeros). This practice became known as the much-maligned “flipping” of art. The better dealers tried to avoid selling to “flippers” out of fear that an artist’s market could collapse, but with secondary market prices spiking, there was ample opportunity for spectacular profit-taking, and we witnessed plenty of it.

Today I find the opposite to be true: very often, when you buy a brand new piece in a gallery, my view is that it’s worth half the moment you walk out the door. Yet still most collectors today buying primary works mistakenly think that they’re getting in on good deals, fantasizing that the new work they are buying is worth what they paid for it or more on the secondary market. Go talk to an auction expert, and you will quickly find out that today this is rarely the case. I understand people love to gamble, but eventually, when collectors figure out that the flipping game is mostly over, they will stop betting on the new and gravitate toward artists who have already stood the market’s test of time, or they’ll finally see the logic in revisiting critically and curatorially proven artists who have not yet had their day in the marketplace. Soon we will see a shift in values; the old stuff will hold its value but much of the newest work will suffer.

You say there are still opportunities in the primary market? Sure, I know of a desirable Sterling Ruby painting bought yesterday for $200,000 that someone is trying to flip for $500,000, and a lovely Tauba Auerbach picture that was $120,000 on the primary market late last year that was recently offered to me for $450,000. Wade Guyton’s work is another prime flip today, but even these will eventually lose momentum and the spreads will inevitably narrow. Mark Grotjahn paintings, which have extremely broad appeal, seem to be the ultimate exception to my rule—their value keeps going up no matter what. In his case I say, ‘exceptio probat regulam in casibus non exceptis’: the exception proves the rule. This year, allowing for such exceptions, the new hot stuff will lose steam in favor of more historical work. It will no longer be fashionable to have an entire house filled with brand spanking new art. In fact, a collection like that will seem plain embarrassing. When the shiny new stuff hits the resale market, it’ll sell like used cars.

The other phenomenon I find strange at the moment is the art world’s, and the media’s, obsession with the alleged manipulation of the auction market. Did you read that recent front-page article in The New York Times in which reporters Robin Pogrebin and Kevin Flynn broke the news that “at major auctions the first bids announced for a piece are typically fictional—numbers pulled from the air by the auctioneer to jump-start bidding”? Haven’t we known this for years? Chandelier phone bids are just a little theater to make it all sound exciting; every auction veteran knows the real bidding doesn’t start until we approach the low estimate.

I often wonder who these do-gooder reporters are purporting to protect. Is it those little old ladies who walk into the sales rooms raising their paddles to bid millions of dollars in total naïveté like blind fools? If people are that stupid in any market, they get what they deserve, and anyway the artworks that are guaranteed are marked with an asterisk right in the catalog, so if you can’t see ’em, get a magnifying glass.

The article also warns that “collectors can find themselves being bid up by someone who, in exchange for agreeing in advance to pay a set amount for a work, is promised a cut of anything that exceeds that price.” It is true that the third-party guarantor gets a single-digit percentage discount in the form of a “financing fee” if he gets stuck with the work, and yes, if it sells above the reserve he gets a percentage of the upside—and again … so what? In any business I’ve ever been in, people get paid for “writing a put.” It’s now their money that’s at risk. Still confused? Think of it this way: the guarantor has promised to buy the work at the low estimate weeks before the auction, and for doing so, he got a small fee and a percentage of the upside if it sells for more, sometimes negotiated as high as 50 percent (this type of insurance is expensive!). I am well aware of situations in which works have sold for inexplicably high prices and the guarantor made out like a bandit, but I’ve also seen a dealer get stuck with a $30 million picture, so don’t get too excited; not every guarantor gets doused by a golden shower of cash money. Here’s one for you to ponder: how about a regulation that protects the third-party guarantor from getting stuck with an overpriced dud no one wants?

Let’s also never forget that auction experts are just fancy salespeople. They’ll talk up their merch using words like “masterpiece,” “impossible to find,” “fresh to the market” or whatever they think will work on you. If you plan on buying at auction, do your homework, or better yet, find a dealer you trust to do your research for you. As far as the widespread concerns about this market’s regulatory oversight, it mostly comes from people who aren’t involved. Several prominent dealers have joined the critics of late, and I do sympathize with them. Sure, it’s a damn shame so many art buyers prefer to buy at auction rather than in galleries. But the unrealistic and huge prices for bellwether works are what help keep art prices up for everyone. When people think “art” is an “investment,” confidence is high and people spend more, on every type of art, young and old. The art professionals sound disingenuous when they complain about high auction prices—they know this rising tide lifts all boats.

Another popular misconception is the one relating to Gagosian Gallery. Larry Gagosian was the subject of recent extensive profiles in New York magazine and here in The Observer. This came after a huge hoopla relating to the announcement that Jeff Koons would “leave” the gallery to do a show at David Zwirner’s new space. Gagosian Gallery rarely gets sufficient praise for all the amazing shows it’s done; instead, people obsess over every bump it hits along the way. The gallery is far from a one-man show. The list of talented professionals at Gagosian is long, and the product it puts out is unrivaled—just look at the investment it makes in its artist’s books.

So why would Mr. Koons “defect” by going to Zwirner’s? Is the impregnable system cracking? My interpretation is very different. Artists at the top (price) level demand heavy investment and aggressive sales, and so perhaps there are some financial differences of opinion (it wouldn’t be the first time—Mr. Koons once nearly bankrupted Jeffrey Deitch), but I also wonder if the artist isn’t simply looking for greener pastures. His large studio and costly production will always require fresh buyers for the work. The surprising thing is not so much the defection but the choice to show with David Zwirner. His program purports to be highbrow, “European”—it’s heavy with painters, and he has taken pride in deliberately shying away from “market artists.” Now he’s cooly embracing Mr. Koons, the ultimate heir to the Pop Art throne, as if it’s an obvious fit. That strikes me as cynical on Mr. Zwirner’s part, and an odd marriage for Jeff (not his first). Somehow no one raises an eyebrow at all this, perhaps because it is understood that business is business, or maybe because I need Lasik surgery, but I think I see just fine.

As for Damien Hirst’s announcement that he too will leave Gagosian, well, when has he not been a free agent? He’ll swim anywhere he smells blood, and faster than any of his peers: in Damien we trust. Gagosian Gallery has amazed the art world time and again by amassing an encyclopedic list of artists that it either represents or has access to. What is truly remarkable is not that one or two will go, it’s that the majority of them stay.

Speaking of which, why do they stay? Showing with Gagosian, or anywhere else for that matter, is no longer a guarantee of success, contrary to what the naïve would like to believe. Sure, the gallery has done wonders for many like Cy Twombly and of course Mr. Koons, not to forget the current market hype around Rudi Stingel, but outside of the best-seller list, many good artists get lost in this ginormous system. A lot of Gagosian’s mid-career artists are struggling to find their voice; in retrospect, they may have been better served by sticking with smaller and more loyal galleries where they are the bigger fish, because in the Gagosian context, they tend to look like canned sardines. The problem for them now is whether there is life after Gagosian, because once you defect from the world’s biggest and best, what’s your next step? It’s a helluva long way down when you leap from the top.

There are several major disconnects between perception and reality in the market today, things that are upside down. I don’t foresee the market ever again returning to the liquidity drought of the 1990s, but a herd mentality mindlessly infected with blind and bullish optimism can’t go on forever. Expect to see a slowdown as some of the wheat gets cut from the chaff while the market gradually cools. But don’t sweat it: remember that “no one makes me feel like you do.”