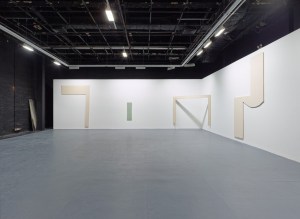 Chelsea stalwart 303 Gallery now represents the up-and-coming artist Jacob Kassay, gallery owner Lisa Spellman has told The Observer. The gallery will also move from its current spot on West 21st Street to a new building under the High Line on 24th Street, as Gallerist previously reported, in mid-April.

“We are so excited about Jacob’s work,” Ms. Spellman wrote in an email. “I have been a fan for so long.”

The gallery will host its first show of Mr. Kassay’s work this fall, in the new 24th Street space.

In 2015, the gallery will move once again, Ms. Spellman wrote, and anchor a new high-rise by developer Scott Resnick at 11th Avenue and 21st Street. 303 will occupy the first and second floor of that space. Ms. Spellman said she isn’t sure that the gallery will also stay on 24th in 2015, but added that “we will probably take on an additional space at some point.”

Mr. Kassay had a show at the Institute of Contemporary Arts in London in 2012 and currently has a show up at the Kitchen. He’s included in a group show, with Lawrence Weiner and Olvier Mosset, that opens at Andrea Rosen gallery this Friday.