Downtown Jersey City Councilman Steven Fulop, a candidate for mayor, today returned fire at Mayor Jerry Healy after the mayor demanded that Fulop’s Ward F candidate apologize for a crack she made at a council caucus meeting about Ward F residents.

“Just because someone has made a mistake in life does not mean they should be relegated to a permanent underclass without options,” said Fulop, a jab at Healy’s 2006 macing by Bradley Beach cops and subsequent conviction for obstruction of justice.

Fulop noted that the federally funded jobs program discussed at the council caucus meeting prohibits anyone with a criminal history – even minor infractions – from applying.

“It’s time for straight talk,” he said, in protection mode for his Ward F candidate. “Councilwoman Coleman’s record of serving the community for years speaks for itself,” said Fulop. “Her statement was intended to accentuate a major flaw with this federal jobs program.

“It’s time for Mayor Healy to abandon the self-serving political rhetoric of demanding an apology and open his eyes to the fact that these programs don’t help the targeted needy population, which is exactly the point Councilwoman Coleman made,” the challenger added. “People in Jersey City who made minor mistakes need jobs to ensure they don’t return to the streets.”

The Healy campaign hit back.

“So, Steve Fulop, which is it? A ‘joke’ as was claimed two nights ago? Or is it now something different Fulop’s brain trust came up with two days later to try to clean up Coleman’s mess,” said Joshua Henne, Healy campaign spokesman.

According to the Journal, “Keith Davis, who runs a job-training program that works with the city, told the council that applicants with a criminal history are prohibited from applying for the program.”

The Journal quoted Coleman saying in response, “So that means everybody in Ward F.” She laughed after the remark, but Healy wasn’t amused.

“I believe in Jersey City and am proud to run alongside a group of dedicated leaders who respect and look out for all residents,” the mayor said. “Steve Fulop knows that Councilwoman Coleman’s belittling comments hurt the hard-working people of Ward F and he should call on her to apologize for these insensitive remarks.” 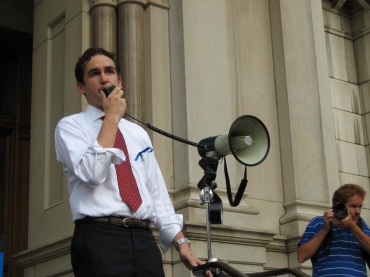