U.S. Sen. Frank Lautenberg, who last week announced he would not return for another term, today endorsed Jersey City Mayor Jerry Healy in his bid for re-election.

“Mayor Healy always puts Jersey City first, and I’m proud to endorse him in the fight to keep the progress going in every neighborhood throughout the city,” Lautenberg said. “Mayor Healy has an aggressive plan to add city parks and make Jersey City an even better place to live, work and raise children. Mayor Healy has been a steadfast ally in reducing gun violence and combating crime, by hiring more cops and getting guns off the streets.”

Healy is facing off against downtown Councilman Steve Fulop in the May, non-partisan election.

In his endorsement, Lautenberg cited Healy’s record of service to the city and his achievements on violence prevention and getting guns off the streets of the city.  Homicide rates are at a historic low in the city, Lautenberg said, and as a result of Healy’s gun buyback program, there are 1,500 fewer guns on the streets.

In accepting the endorsement, Healy referenced Lautenberg’s own record on gun control and anti-violence measure.

“Senator Lautenberg’s vote of confidence means so much to me,” Healy said. “He pursued the American Dream in business, and then worked tirelessly in Washington to make that dream was a reality for countless New Jerseyans. There’s been no bigger champion for working families, and I look forward to being part of Senator Lautenberg’s ambitious agenda for the next few years – especially when it comes to getting guns off our streets and making our cities safer and more prosperous.” 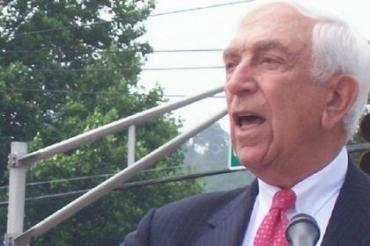