It was not the sort of applause that generally greets a star. It was that more rarefied kind reserved for somebody truly beloved. Last December, when Judith Light took to the stage of the New Amsterdam at The 24th Annual Gypsy of the Year competition to do what has become her regular moment-of-silence spot for those lost to AIDS, there was a massive outpouring of affection. A longtime Broadway Cares/Equity Fights AIDS standard-bearer, she couldn’t be better cast for the bit, her voice ringing with dignity and compassion. But that reception set off in me a wave of jealousy, along with the toxic thought, “Damn! They love her as much as I do!”

Bernie Telsey, the casting director and co-founder of Manhattan Class Company, understands my petty feeling well—he doesn’t enjoy sharing Ms. Light either. On the one hand, as he counseled me last week, you’re happy that people see what you see. On the other hand, “she’s not your secret anymore.”

Mr. Telsey, who had almost everything to do with

getting Ms. Light back on the Broadway track, having hired her in 1999 to replace the awesome, award-showered Kathleen Chalfant in Margaret Edson’s Pulitzer Prize-winning Wit, has cast Ms. Light as the honoree—“for her bold, daring, risk-taking spirit”—at MCC’s annual fund-raising gala, “Miscast 2013,” which will be held March 4 at the Hammerstein Ballroom.

She’s had three shows on the Main Stem in three seasons—pretty good hittin’ in anybody’s book, and worth celebrating—and she was a shoo-in, Mr. Telsey said, when he and his MCC partners, Robert LuPone, Will Cantler and Blake West, threw the bones on the floor. “When we talked of someone who’s touched our lives as an actress, as an ambassador for our arts and education program, it was unanimous. All four of us have that kind of relationship with her.”

Since Wit, he pointed out, she hasn’t stopped working in New York. “She’s so connected with the words that she’s saying, in whatever play, that she touches you as an audience member. When she speaks, it crosses over those footlights and lands in your lap. She’s sharing that character’s story, and you just feel connected with her.”

This season, Ms. Light will appear in Richard Greenberg’s The Assembled Parties, bowing April 17 at the Samuel J. Friedman under Lynne Meadow’s direction. In the contemporary domestic battle station of a sprawling Central Park West apartment on the Upper West Side, she fights a 20 years’ war with her ex-movie-star in-law (Jessica Hecht).

But Ms. Light’s second life on Broadway, beginning with Wit, wasn’t exactly something she expected. “When you do something else for a long time, people don’t know what you can do,” she said in a recent interview. “The story has been that they say, ‘Well, we thought she was One Life to Live or Who’s the Boss?’ and then, all of a sudden, who would think they would put me into Wit?”

THE TRENTON-BORN MS. LIGHT came out of Carnegie Mellon “a terrible theater snob” (her own words, in hindsight) who toiled in the regional vineyards and at Milwaukee Rep and Seattle Rep. In 1975, on a rare foray to New York for a Theatre Communications Group audition, she met casting director Rosemary Tichenor and asked from point-blank range if she seemed Broadway-ready.

“Not unless you’re planning to make your life in rep,” replied the wise Ms. Tichenor, who was then staffing A Doll’s House and assigned her to maid service for Liv Ullmann. The legend and the novice made their Broadway bows together; currently, Ms. Ullmann is plotting another go at A Doll’s House, directing her own adaptation.

Sans Ms. Tichenor, Broadway was harder and harsher for Ms. Light. It was an uphill climb convincing her then-agent to send her out for Herzl. She realized from a Backstage character breakdown of the wife of the Zionism founder that she was that woman, and that she deserved to be seen. She was, and she got it.

All eight performances of Herzl brought Ms. Light’s lifetime Broadway total up to 116, so she looked Off Broadway for work, tried a little Richard III and As You Like It, decided she didn’t (like it) and focused uptown on the green pastures of daytime soap opera. She settled into One Life to Live for five high-profile years as Mrs. Karen Wolek and proceeded to lead one of the liveliest double lives in “Llanview.”

One day, her head writer asked if she had ever seen Luis Buñuel’s artsy, sexy movie about a housewife-turned-hooker called Belle de Jour. “We’re thinking of doing that character with your story line—what do you think?” he said. She gamely glammed up to match Catherine Deneuve’s bountiful blondeness. The character’s shining half-hour came in two parts—a spectacular witness-stand meltdown in which she hysterically confessed her promiscuous past to save a friend from being convicted of murder.

This 15-minute fire-and-light show is one of “TV Guide’s Most Memorable Moments on TV.” The subtext is apparent, said Ms. Light. “If you watch it, think what it means for someone to come out. The process of coming out is revealing a secret where you are sure you will be rejected, but you have to do it because you have no other choice. You’re saying, ‘This is who I really am. It’s not the person you think I should be or that I want to be. I am this way. I want to live my life this way.’”

One Life to Live paid off for Ms. Light in back-to-back Emmys in 1980 and 1981 and a hubby for life: Robert Desiderio entered the small-screen picture as a bad guy (in a gang of three that also included a pre-Married … with Children Ed O’Neill and her once and future Lombardi, Dan Lauria). “I had lots of scenes with Robert,” she recalled. “We were attracted to each other instantly, but they weren’t love scenes at first. It turned into that when the writers saw the way we were playing it and the subtext we were creating for ourselves. They saw the chemistry and started putting it in the writing.”

The Desiderioes went West when their One Life characters left the show at the end of ’82, and the cache of two Emmys netted Ms. Light star parts in sitcoms—notably, naturally, Angela Bower, the alpha-female ad exec who hired Tony Danza to housekeep, etc., on Who’s the Boss? There have been scads of TV movies and series since—Phenom, The Simple Life, The Stones, Ugly Betty, Law & Order: SVU—stretching all the way to TNT’s Dallas, which she just swore off after eight episodes earlier this month to concentrate on the Greenberg play (it’s said he wrote it with her in mind).

Mr. Telsey knew her from her work on television. “I grew up watching her on TV on One Life to Live,” he recalled. “You can make fun of a soap opera if you want, but she was genius on that show—and she was one of those people who was in my brain, always, to go, ‘How do I get that woman on stage?’”

TWO WEEKS DEEP INTO REHEARSAL, Ms. Light spoke of The Assembled Parties guardedly and in generalities, perhaps hoping to preserve its surprises. Act I takes place in 1980, Act II in 2000—Mr. Greenberg is fond of generation-jumping (Three Days of Rain)—and the show’s focus is how a well-to-do Jewish family fares over the decades.

“My character, in this particular play, is a woman who has made what she considers to be a terrible mistake and had to get married,” she explained. “This happens around 1949, 1950. And she is cut off by her mother, who denies her the closeness that they once had. The thing that’s happening is that Jessica Hecht’s character—my sister-in-law—does something that transforms my whole life and my whole relationship to her. The Assembled Parties is about making a relationship, and making a family, out of people who are not necessarily family. It’s about connections, making connections.” Her performance promises to be impressive, if her turn in Eric Simonson’s Lombardi two years ago is any gauge. In 244 performances, she played the ultimate in football widows, Marie (Mrs. Vince) Lombardi, who treated her loneliness with stiff drinks.

“I knew from the start—from the first reading—that she absolutely got the character,” Mr. Simonson recalled. “She understood the humor, which was key to understanding the role.””

But it wasn’t just that. “Judith was a consummate professional in rehearsal,” he said, “extremely positive in nature, never said a bad word about anybody—and the cast came to call her ‘Mom.’”

After the curtain falls or the series fails, there is still Light. When America Ferrera, her Ugly Betty co-star, did a stage turn for the Women’s Project recently in Bethany, Ms. Light led the opening-night cheering session. When Lily Rabe, her daughter in MCC’s Colder Than Here, won the Actors’ Equity Callaway Award for playing Portia in The Merchant of Venice, she was the kveller in the crowd. When Danny Pinatauro, her son for 196 Who’s the Boss? episodes, made his stage debut at the Duplex as a street hustler in The Velocity of Gary, “Mom” was down front, beaming.

Lombardi got her a Tony nomination. The Tony itself came last year for following Linda Lavin’s Off-Broadway act when Jon Robin Baitz’s Pulitzer-contending Other Desert Cities went to Broadway: a visiting relative politically out of sync in a Republican California home, fresh out of rehab and flinging stinging zingers right and right.

Of course, none of it might have happened without Wit. “They believed in me,” Ms. Light said. “I’d done nothing on stage for 22 years, and they gave me a shot. I still remember a review I got that said, ‘This person wouldn’t be your first or your 500th choice for Wit—but, oh my goodness!’” 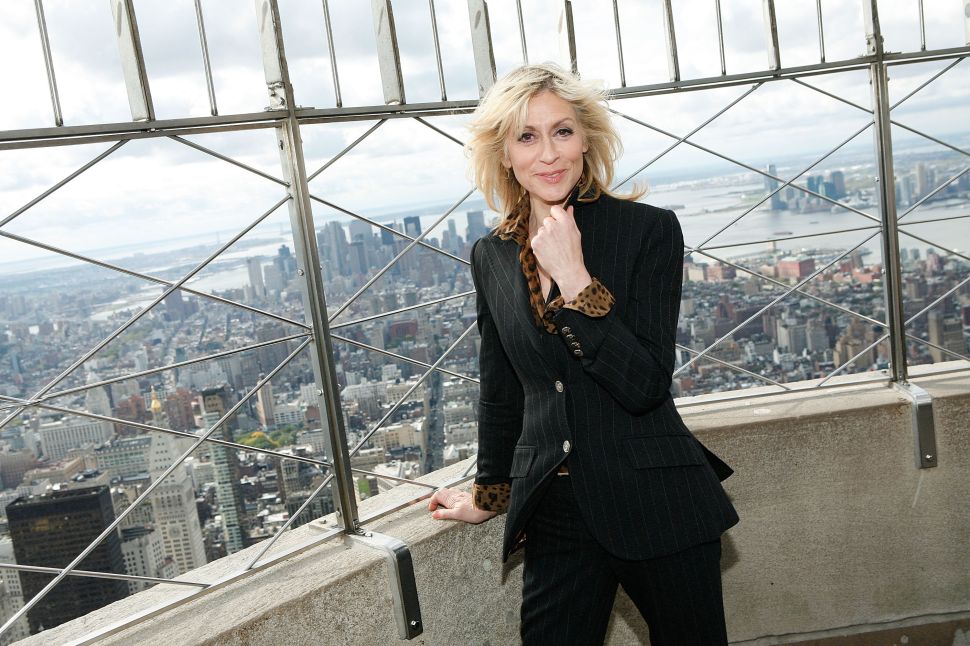