UNION CITY – There’s no rush to fill in the undercard for the LD 33 Stack ticket, but Hoboken Councilwoman Beth Mason stood up in the front row and did the requisite Eva Peron wave above the massive crowd in the shiny new Colin Powell Elementary School gym.

A source close to Hudson politics read the optics as good for Mason, who’s cozying up to Stack in hopes of landing an Assembly seat on Stack’s 2013 legislative ticket.

A former candidate for mayor with deep pockets, Mason’s competitng with old foe Hoboken Councilman Ravi Bhalla for the Hoboken seat to be vacated by Assemblyman Ruben Ramos (D-33).

Ramos is running for mayor this year against incumbent Dawn Zimmer.

But only Mason appeared at the Stackfest, complete with special guest Gov. Chris Christie.

Once a Hudson County Democratic Organization (HCDO) fixture, Connors won’t run for re-election to the Assembly this year, instead taking aim at a local council seat as part of Team Fulop. 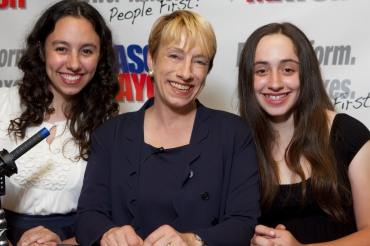