This morning, Mayor Michael Bloomberg journeyed into the belly of the meme-making beast when he visited Buzzfeed’s headquarters on 21st Street to announce a new “Made in NY” initiative involving a website and ad campaign designed to attract more tech startups to New York City. To mark the occasion, his staffers created a Buzzfeed-style listicle entitled, “5 Animals Who are Not Disappointed in Mayor Bloomberg,” on official city tumblr and his personal site.

“Since BuzzFeed is famous for lists, such as the ’33 Animals that are Extremely Disappointed in You,’ we came up with our own list,” the introduction to the post says. “Here are the 5 animals who are not disappointed in Mayor Bloomberg.”

Mayor Bloomberg’s listicle features pictures of him sitting in the stands at Yankee Stadium alongside Kermit The Frog, getting kissed by a sea lion at the Central Park Zoo, standing with a group of birds from the film Mr. Popper’s Penguins and a photoshopped portrayal of him meeting the zebra and horse that ran wild on Staten Island last year. The listicle also attempts to put a rather rosy spin on the mayor’s relationship with famous Groundhog Day oracle Staten Island Chuck, who bit Mr. Bloomberg during the annual weather prediction ceremony in 2009. Despite this incident, the listicle argued the rodent isn’t disappointed in the mayor because they “don’t always get along–but they find a way to work together anyway.”

Thus far, Team Bloomberg’s attempt to tap into viral internet culture doesn’t exactly seem to have caught fire on the web. As of this writing, the listicle has been tweeted just 34 times, however it earned a seal of approval from Ben Smith, boss of Buzzfeed’s editorial team. 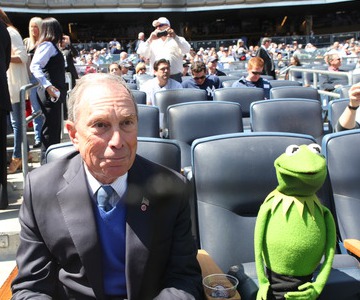