U.S. Sen. Bob Menendez today denied a Fox News report that he had flown an as yet unreported flight on the private plane owned by a longtime friend and political donor.

Fox reported that Menendez flew on the plane owned by Florida eye doctor Salomon Melgen in 2008 on his way to a golf outing in the Dominican Republic.  Menendez has admitted to – and paid for – three flights on the plane.

Today, the senator, who is facing an ethics inquiry over the previously reported flights, said the Fox report is unequivocally false.

“The Fox News report, attributed to unnamed sources, that Senator Menendez flew to the Dominican Republic on a private plane in April, 2008 is absolutely false,” a spokesman for Menendez said. “This unsubstantiated report is just the latest outright falsehood that the right wing smear machine has spread about Senator Menendez in the past several weeks. We can’t possibly respond to every rumor, innuendo, and outright lie that has been told about Senator Menendez, nor will we attempt to, but we want to set the record straight– this story is simply not true.”

Menendez has reported flying on Melgen’s plane three times since 2010.  One flight was paid for by the Democratic Senatorial Campaign Committee, of which Menendez was chairman at the time of the flight, and two flights were paid for out of Menendez’s pocket.  However, Menendez did not pay for the pair of 2010 flights until January of this year, calling the delay an oversight. 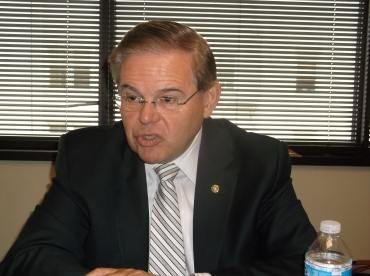