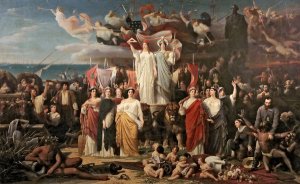 ‘Genius of America’ by Adolphe Yvon.

A controversial mural by Adolphe Yvon, covered by a curtain for a decade in the Chancellor’s Hall at the State Education Building in Albany, is now back on view on a limited basis. [NYT]

Here are six things that are too “fragile, valuable, or strange to display to the public.” [Telegraph]

Wolfgang Laib is the subject of a permanent installation at the Phillips Collection. [WSJ]

Not to contradict our cover story or anything but there are too many artists in Peekskill, N.Y. [WSJ]

Marina Abramovic will make a film about James Franco. [Gawker]