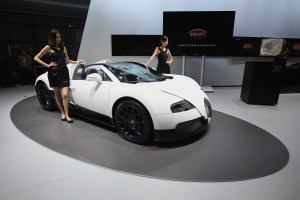 A Bugatti at the Shanghai Auto Show in 2011. (Getty Images)

“Charles Venable, the new director at the Indianapolis Museum of Art, envisions a giant car show — right there in the museum — an automobiles-as-art thing. Picture super high-end rides like Bugattis. Maybe it’s timed to coincide with an Indianapolis 500.” [The Indianapolis Star]

Pacific Standard Time 2 will have a Latin American theme. [LAT]

Quite a few fragments of Babylon’s Ishtar Gate and Processional Way appear to have been stolen. [The Art Newspaper]

NPR considers the architecture of American embassies. [All Things Considered]

Speaking of NPR, in case you missed it, here’s Observer reporter Dan Duray on All Things Considered, talking about goings-on in the art world. [ATC]