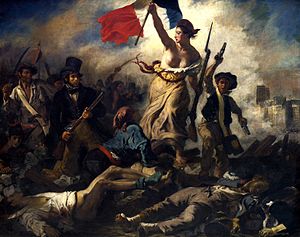 Here is an interview with Jonathan Jones conducted by Lewis Lapham (!). [Bloomberg]

A woman has been arrested for scrawling what may be 9/11-truther graffiti on Delacroix’s Liberty Leading the People at the Louvre Lens. [RFI]

A collector believes he has found a painting of a head that once was part of Courbet’s notorious Origin of the World (1866). [ArtsBeat]