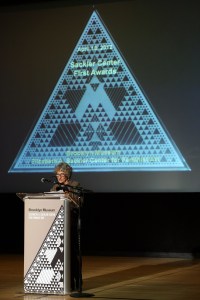 Lippard at the Brooklyn Museum in 2012. (Getty Images)

Here’s Bob Colacello on the state of things at L.A. MOCA. [Vanity Fair]

Sotheby’s stops live auctions in Canada. [The Globe and Mail]

Michael Kimmelman on Ezra Stoller, the great photographer of modern architecture: “‘The art is the architecture,’ Stoller insisted, likening what he did to a musician ‘given a score to play who must bring it to life and make the piece as good as it can be.'” Stoller’s currently the subject of a show at Yossi Milo gallery in Chelsea. [NYT]

Critic Martha Schwendener edited the February issue of The Brooklyn Rail, and she has a bevy of great people weigh in on “alternatives” in the art world. Here’s Lucy Lippard with the long view. [The Brooklyn Rail]

And here’s Barry Schwabsky rethinking the way that writers progress through their careers: “[T]he brief review is like an iceberg—almost entirely below the surface.” [The Brooklyn Rail]

A look at the Brooklyn Museum’s “Go” show. [WSJ]

Michelangelo sculpture installed in a Milanese prison. [The Art Newspaper]