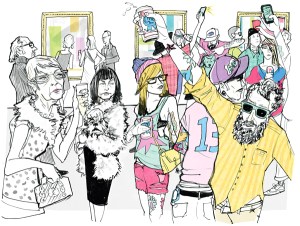 It’s possible that the Upper East Side changed the night last September when the fire department broke up the disco party at 980 Madison. The building houses, among other businesses, a luxury spa and Gagosian Gallery. Soon it will have a Gagosian-owned “neighborhood restaurant,” as Larry Gagosian described it in a recent interview with Peter Brant. There will be chili. And waffles.

On the third floor of 980 Madison is Venus Over Manhattan, an art space opened last year by Adam Lindemann, a contributor to this paper and the disco party’s host. The crowd had gathered to celebrate a show by the artist Peter Coffin. Young women carried trays of tequila shots. Around 8 p.m., the festivities moved down the hall to a room dimly lit with red lights. From the street, you could hear DJ Harvey playing records. Professional roller skaters skated around on glowing LED wheels. A cluster of young men and women nonchalantly smoked near the entrance.

When the fire trucks came, part of the crowd decamped across Madison Avenue to Bemelmans Bar at the Carlyle, where a pianist played selections from the Great American Songbook and the martinis cost $21.

“We knew the fire marshal was going to show up,” Mr. Coffin told me. “In that neighborhood, if the noise is too loud, you don’t call your local police department. You call your Congressman.”

In the arc of art-world history, the Upper East Side started out as the neighborhood with the most groundbreaking shows. Leo Castelli was up there showing Warhol, Rauschenberg and de Kooning. As the art world expanded, dealers moved to Soho, and then Chelsea. Uptown gained a reputation for stodginess. But when the most recent recession hit in 2008 and Madison Avenue was laced with empty storefronts, things started to change.

In 2010, the Chelsea dealer Marianne Boesky rented a townhouse on 64th Street—“a five year laboratory” is how she described it in an e-mail message—and gave the space over to young curators and artists like the Italian art collective Lucie Fontaine, whose members lived in the house while organizing a show there. Alex Zachary opened a gallery inside a grimy duplex and showed work by, among others, the greatest of all lost feminist artists, Judith Bernstein (charcoal drawings of enormous penises), and Lutz Bacher (she filled the duplex with sand). Dominique Lévy, formerly of 78th Street’s L&M gallery, is moving to an old bank building on Madison in the spring and giving the radically contemporary Paris dealer Emmanuel Perrotin the ground floor. Lower East Side galleries are heading uptown. Los Angeles’s Blum & Poe has an Upper East Side broker and is, according to sources, “actively looking” to open in the neighborhood. Is it possible that the Upper East Side is cool again?

“If you look at the neighborhood, it’s a different spirit,” said Ms. Lévy. “I went to an opening [at Venus Over Manhattan] and looked at the crowds coming out of the elevator. I joked to Adam, ‘Did you hire these people to come here?’”

More than any other neighborhood in New York, the Upper East Side projects its mythology onto people. It conjures images of wealth and status, prep schools, women in fur coats with diamonds and converted carriage houses off Park Avenue. The neighborhood has tropes that can be played with, more than, say, Chelsea does.

“In January 2010 when we started the gallery the art market had more or less bottomed out,” Alex Zachary wrote in an e-mail message. “So opening a dingy gallery on 77th Street seemed a succinct way of framing the problem, though maybe too cute by half.”

Mr. Zachary announced earlier this year that he and his business partner Peter Currie would move their gallery to Harlem. He finds the Upper East Side to be “closer to its old self,” in the sense that when money returned and the storefronts on Madison started being bought up, having a gallery there became “somehow less cute.” But most dealers I interviewed brought up Mr. Zachary when talking about how the neighborhood has changed, saying that he made a certain kind of gallery seem possible there.

“People said no one would come,” Mr. Zachary said, “which turned out to be wrong, but more to the point, it made no difference either way. At this stage in the art world, you can have a gallery in Harlem or on the Upper East Side or in Bermondsey or on the moon—I truly believe our physical location is meaningless; we’re not a dry cleaner. And amazingly, people still say to me, ‘Oh honey, don’t move to Harlem, no one will come.’”

The city is legendary for its rigid line dividing uptown and downtown. In the art world, at least, such divisions are becoming more fluid as the market continues to expand.

“It’s not any more that it’s only Chelsea, and then the trendy Lower East Side and the posh Upper East Side,” said Marc Payot, vice president of Hauser & Wirth, which runs a gallery on 69th Street off Madison and just opened the city’s largest commercial gallery on West 18th Street in Chelsea. “It’s all one big thing. Today, the whole art world is like that. It allows a mix of all kinds of things. It’s not a world that divides, it’s a world that includes.”

“One time, we got a very silly review of Aaron Curry’s exhibition,” said Gordon Veneklasen, director of the Michael Werner Gallery, which opened a contemporary program on the Upper East Side in 1990 in the same space that once housed Castelli. The reviewer “found it odd that this artist was showing in this area. Leo Castelli opened in ’55. The Warhol pillows were shown there in ’66. The Upper East Side at that time was probably more formal then than it is now. I think the idea of saying that certain artists have to show in certain areas is almost provincial at this point. Is Chelsea really cutting-edge? I don’t think so at all. It’s silly. It’s like saying New York is one thing and L.A. has no ideas. We all know that that’s bullshit at this point.”

It depends on who you ask. Ms. Boesky, whose flagship gallery is on West 24th Street, said Chelsea “may be the best zone of free culture in the world.” In Chelsea, you can get hundreds of visitors a day, which is good and bad. Amalia Dayan, of the Upper East Side gallery Luxembourg & Dayan—which recently filled its space with a “surrealist garage sale” by Norwegian artist Bjarne Melgaard complete with S&M tableaux—opened uptown in 2009 after co-running a gallery in Chelsea.

“You can do anything on the Upper East Side today,” she said. “Historical, contemporary, very young or very old. And the collectors live up here.”

Still, spaces in Chelsea are easier to come by, and they’re larger, if you’re into that sort of thing.

“If you have an artist who wants to park two buses in the space, that’s tough,” said Mr. Veneklasen. “But I don’t want to work with those kinds of artists anyway.”

“What are some of the advantages specifically of being on the Upper East Side?” I asked him.

In New York, some dealers think of Chelsea as a shopping mall, the way Soho was before everyone moved out. Others were rattled by Hurricane Sandy, which set back a number of wealthy galleries for weeks and threatened to destroy smaller businesses altogether. Some dealers characterized the Lower East Side as becoming just another art district.

It makes sense, then, that Bill Powers, owner of Half Gallery on Forsyth Street, who described the old gallery as being “in violation of the Geneva Conventions, it was so small,” is reopening this week in a townhouse on 78th Street. The old gallery was known for openings that spilled out into the street in order to accommodate everyone who showed up to drink mini-cans of beer (and, at one exhibition, have their picture taken with Terry Richardson). The new space will be open by appointment only.

“The reality,” Mr. Powers said, “is that, with the exception of one person, anyone that I sold to lived a hell of a lot closer to our new location than the old space on Forsyth Street. So you do the math on that.”

Uptown now has some of the novelty that the Lower East Side had a few years ago. Fergus McCaffrey, who owns a gallery on 67th Street but recently decided to open a second space on West 26th Street in Chelsea, said he first opened uptown because it was “a way of distancing oneself from other galleries.” He also saw it as a place where artists could be freer to experiment. “You can take risks on the Upper East Side that you can’t afford to take in Chelsea,” he said. “If you look at the succession of younger artists who have had shows at Upper East Side galleries and just blown it, the scales are less intimidating. It’s less a career-ending risk than a 7,000-square-foot space in Chelsea, which, if you fail, your career is over, basically.”

People are opening spaces uptown that a few years ago might have been more likely on Orchard Street. Art adviser Eleanor Cayre and curator Vladimir Roitfeld’s new project space is inside a townhouse on 78th Street, the former home of an Upper East Side old-timer, the dealer Christophe Van de Weghe. Despite the fancy digs, there’s something casual about the whole thing. They’re not advertising, and their names will be kept off the door. Mr. Roitfeld moved in upstairs. There’s no fixed schedule of exhibitions. And that doorman on opening night a few weeks ago—on a Sunday, the same night Lower East Side galleries hold their openings in tandem—wasn’t deliberate; he just kind of came with the place.

“Everyone is in the middle of an identity crisis,” one Lower East Side dealer told me.

He’s been looking into a space at 980 Madison and envisions it as a “showroom,” with art, furniture and anything else that could turn a profit. The money difference is substantial—the asking price is about $100 per square foot, almost double the price of the Lower East Side. Still, the dealer said, the market has changed to such an extent that having a classic kind of gallery downtown, with a small roster of artists you represent and cultivate, just won’t work anymore. In today’s market, the minute artists start making money, they decamp for a larger gallery.

If the Lower East Side has a reputation as the main arbiter of the avant-garde, the dealer said, now that neighborhood “is an establishment in and of itself.” He said there are still interesting galleries there, but “the avant-garde now is about giving people what they want, wearing a $4,000 Prada suit, discovering that guy who’s going to make a ton of money at auction a year from now. Even the artists are market-driven. They see all their friends doing well, buying shit with all the money they make from dripping a little sweat on charcoal. So they end up wanting to take it to the source”—the Upper East Side, where the money is. “The avant-garde,” he said, “is about being with money.”