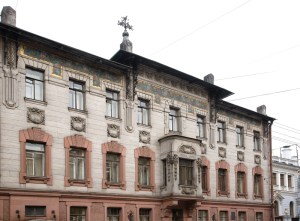 The Nabokov Museum in St. Petersburg, Russia, was vandalized recently by a group calling themselves the St. Petersburg Cossacks.” Early in January, a vandal threw a bottle through a window of the museum with a note inside that threatened “God’s wrath.”

Earlier this week, according to the Hindustan Times (thanks to Melville House for calling attention to the story), vandals spray painted “pedophile” on the walls of the museum.

The museum, which occupies the house Nabokov was born in, has received threatening letters for the last six months, according to an interview with the director with the Russian newspaper, Novaya Gazeta. The letters contained “a great deal of orthographical mistakes,” the director said. Some of the letters referred to Nabokov’s most famous novel, Lolita, as “amoral.”