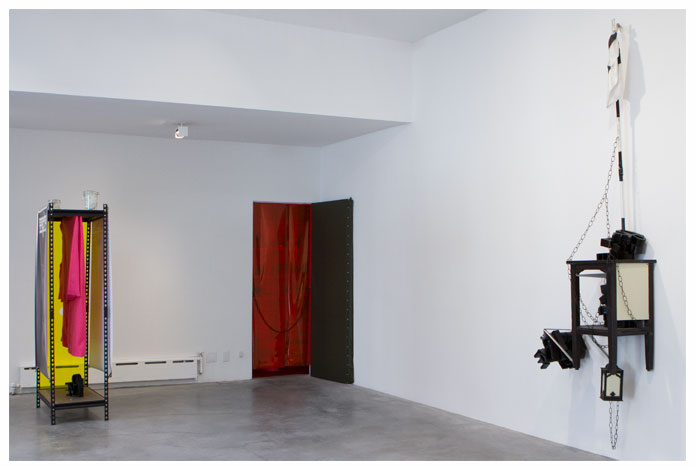 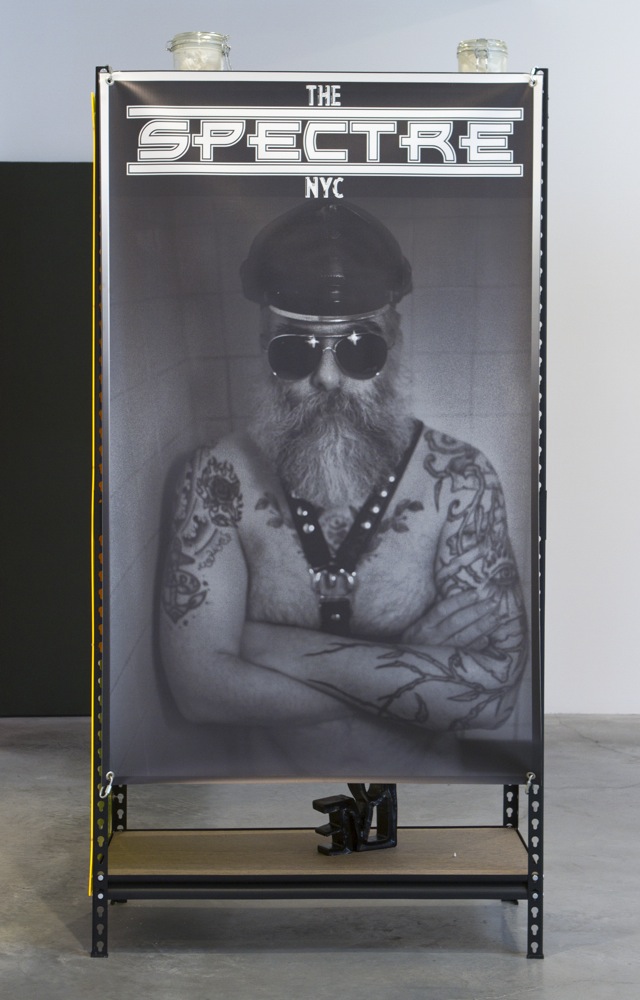 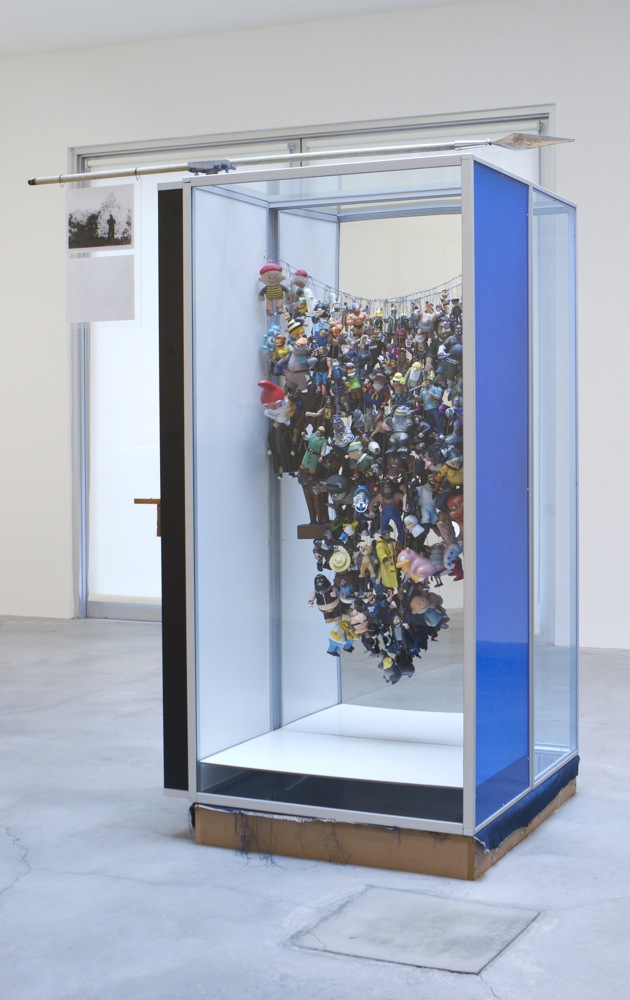 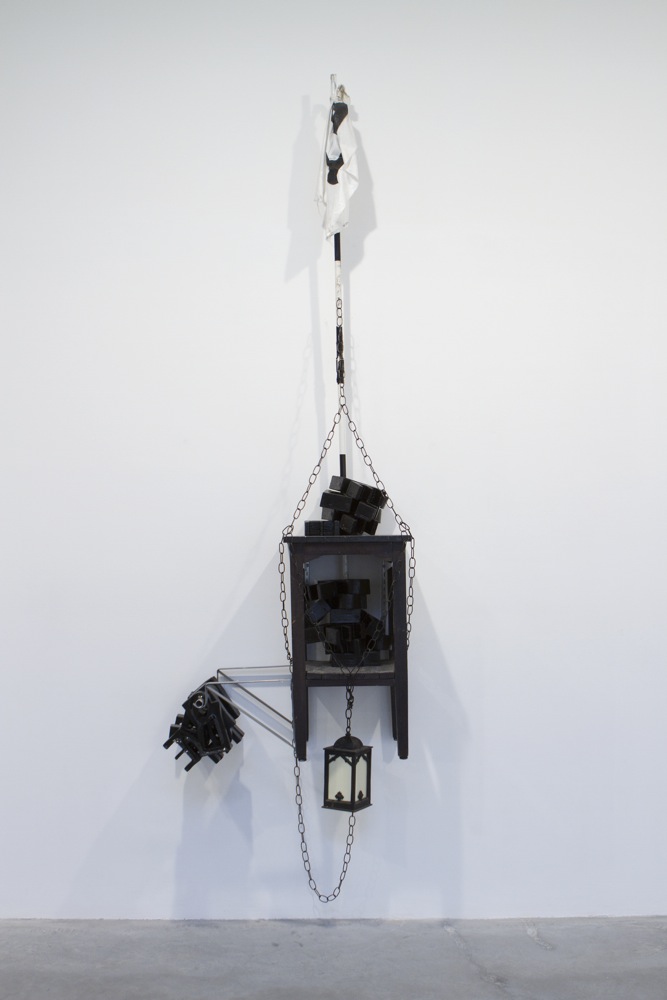 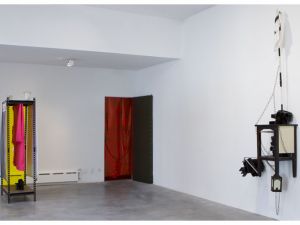 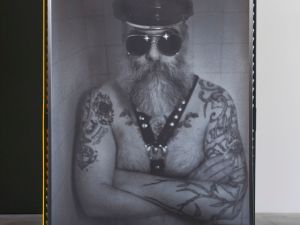 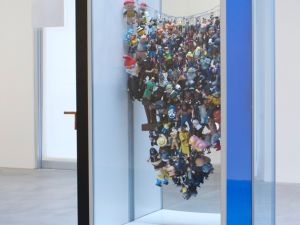 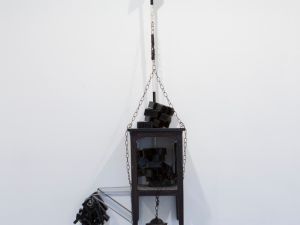 You can’t erase what they call you, but you can always turn it over. Starting with the letters of his own name on the wall, deliberately transposed as “Nakand Blayle” and then corrected with two arrows drawn in black Sharpie, Nayland Blake’s “What Wont Wreng” uses prefab cabinetry, glass, plastic figurines, rephotographed found photography, an imaginary leather bar, broomsticks, miscellaneous studio furniture and the space around the stars in the American flag to transform Matthew Marks Gallery’s small 22nd Street space into a portrait of the artist as a portrait of the neighborhood as an inquiry into the constantly mutating opacity of identity.

Eleventh, a freestanding, man-sized, double-sided cabinet, meets the viewer as he enters. On top sit two glass jars of Crisco, scooped out in white handfuls, and hanging over both front and back is a vinyl reproduction of a black-and-white photo of the artist, in leather cap and harness, black sunglasses and beard, under the name “The Spectre.” Inside the cabinet hangs a soft pink curtain. In the back corner, that ongoing Chelsea phenomenon, the repurposed toilet—repurposed in this case into storage for office supplies and bottles of San Pellegrino—is repurposed again into an installation with a pink vinyl curtain and hanging chain. Oh reverses the flag, attaching a wooden stencil of stars to an upright red broomstick rising from a stool.

Buddy, Buddy, Buddy, Mr. Blake’s second man-size magician’s cabinet, is divided vertically into two mirror-backed compartments. In one hangs a beard of plastic figurines—gnomes, cartoon bears, Vikings, an Ewok chieftain, Groundskeeper Willie—each hanged by a wire around its neck. Two round holes—the kind that Ikea might drill into a desk for electrical cords, but which Ikea wouldn’t put at pelvis height—connect the beard’s compartment to the other side, where a furry doll with a bag over its head sits on a low table underneath a third hole, this one doubled again in the mirror, and leading out, as if for air. Or maybe it’s leading in? Everything is exposed and nothing revealed. (Through April 20)