At Temple Emanu-El in the Upper East Side this morning, hundreds of New Yorkers–including a small army of elected officials–braved ice-cold wind gusts and swarms of reporters to pay their respects to former Mayor Ed Koch, who passed away last Friday. The long list of top-tier politicos in attendance included current and former governors, mayors and senators. And every one of them had a fond memory of Koch to share.

“My last conversation with him was when I went to his office to ask him to support me for comptroller.” Manhattan Borough President Scott Stringer recalled, for example. “I prepared. I expected to have a long conversation. He looked up at me and said, ‘I endorse you. Go win. Goodbye.'”

Senator Chuck Schumer remembered a long-standing feud he had with Mr. Koch that culminated in Koch endorsing his Republican rival, Senator Al D’Amato. However, when Mr. Schumer offered a small olive branch, the rivalry immediately melted away.

“I’ve got lot of Ed Koch memories. How could anyone not have a whole lot of Ed Koch memories?” Mr. Schumer mused. “I was the only assemblyman outside of his district to endorse him [in 1977]. In 1989 I sat down with him and said ‘Don’t run again. You’ve been a great mayor, but don’t run again.’ And he didn’t talk to me in 10 years. Then he worked hard for Al D’Amato, in part for that reason. Then, I called him after I won and said, ‘Why don’t you come to my swearing in and I’ll acknowledge you?’ He came and we were friends ever since.”

We inquired further as to which restaurants Koch had recommended.

“A number of them! He likes Shun Lee … [and] Peking Duck House. He had some favorites in Chinatown. He was very–” Ms. Gillibrand answered, pausing to find the adjective to describe Koch’s passion on the subject. “Well-informed.”

Overall, Ms. Gillibrand described Koch as having been “as quintessentially New York as the Empire State Building.” But she was hardly alone in using the term “quintessential” to describe the late mayor. Indeed, official after official also labeled him a “a quintessential New Yorker,” including Mayor Michael Bloomberg in a lengthy eulogy and former Mayor David Dinkins, who bested Koch in his bid for a fourth term.

“He’s a quintessential New Yorker. You know, ‘Hi! I’m Ed Koch! How’m I doing?'” he recalled. “I can see him standing at the foot of the Brooklyn Bridge during the [transit workers] strike, encouraging people to walk to work. I remember times like that. He never gave up on our city.”

(Mr. Dinkins also shared a somewhat morbid reaction to today’s proceedings: “Well I’m not much younger than he, so that’s one of the thoughts I have. How long will I be around?”)

Many of the aspiring mayors who want to follow in Koch’s footsteps were present too, reminiscing on his contributions and the lessons that could be learned should they succeed in their own quests to lead the city. And even though Koch was a proud Democrat, this extended to both sides of the partisan aisle.

“Ed Koch always told the truth. Good, bad or indifferent, he always told the truth. And that’s a lesson to be learned for anyone who wants to hold office,” Republican contender Joe Lhota said. “The thing I remember, Ed Koch in the early 1980’s … with his hands above his head, yelling, ‘How’m I doing? How’m I doing?’ Actually listening to the people. And that’s something most people don’t remember. Ed Koch listened to all New Yorkers, and that’s a great trait.”

“I will miss being able to call Ed Koch and ask [for] his advice,” Ms. Quinn said. “At the end of almost every conversation, he’d say, ‘But really do what you want. And if people don’t like it, just bleep them.’ So it was always good advice to get.”

When put to the question, “How did he do,” Mr. Quinn was similarly simple and direct.

“He did better than anybody could have done,” she flatly replied. 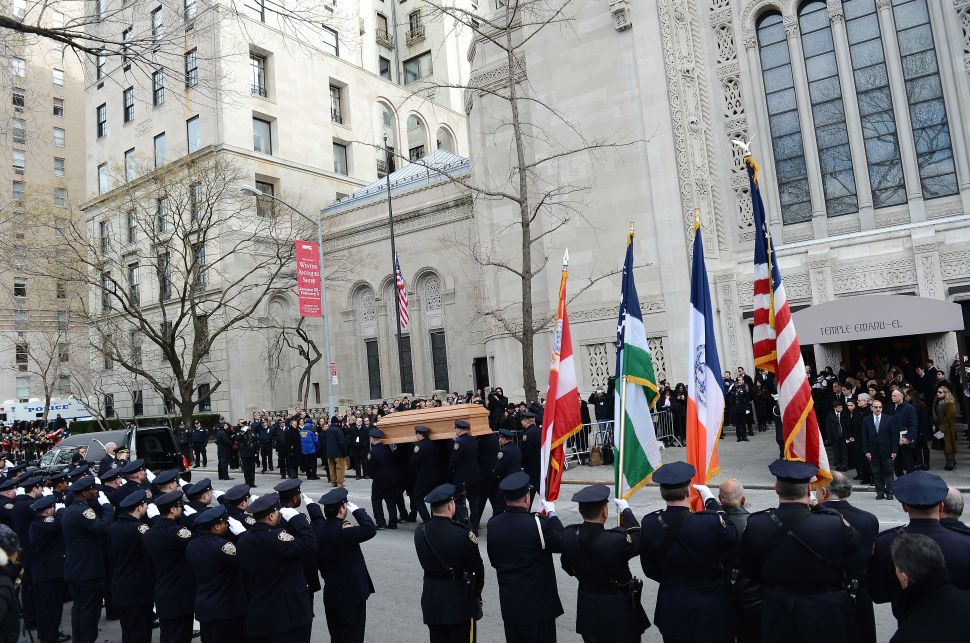