Named for a Sonic Youth album, this exhibition, part of which opened last week (the rest opens on Feb. 13), is a madeleine opening onto memories of the grunge era. Gathering artworks that were made or shown in New York in 1993, the curators—Massimiliano Gioni, Gary Carrion-Murayari, Jenny Moore and Margot Norton—make the case that art-making had a vastly different role at that time.

Zingmagazine publisher Devon Dikeou’s 10 directory boards (all artworks dated 1993 unless otherwise specified), displayed in the museum’s lobby gallery, set up the era’s art scene. White plastic letters on black felt spell out the title, venue, dates and names of artists of every group show Ms. Dikeou participated in that year. They were at alternative venues like the bar Flamingo East and PS1; some were curated by art gadabout Kenny Schachter. Among those on the circuit were Marilyn Minter and Paul McCarthy; the young Spencer Finch and Ricci Albenda appear next to Barbara Pollack (who is now better known as an art writer). Many of the names of the participants—like Jutta Koether, Matthew Richie, Dan Asher, Adrian Piper and Craig Kalpakjian—are familiar today, but many more have been lost to time.

These boards riff on what was then the mecca of art, the Leo Castelli Gallery at 420 West Broadway, which displayed the same make and model of board in its building’s lobby to announce its shows. Ms. Dikeou was 30 in 1993, and the golden keys inserted in the locks of each directory board, making it look as if you could easily reach out and change the names yourself, speak of her longing to be in the Castelli context, a world away from her own. Could you just make yourself a star?

If Ms. Dikeou’s work is a meditation on the center of gravity and the fringes of the New York art world, autobiographically self-lacerating ’90s wunderkind artist Sean Landers gets at the heart of what it felt like to make and show art in New York in 1993 with [sic], a confessional ramble about ambition and uncertainty scrawled in all caps on 451 sheets of yellow legal paper displayed in a grid on the wall. “There really seems to be no point to my life these days,” reads a typical passage. Listening to soft rock on the radio, musing about his Catholic hometown’s strip bars (“bottomless is legal in this state unlike New York”), watching the TV show Roseanne and the movie Soylent Green, scribbling in notebooks at diners, philosophizing about breasts and Vito Acconci, smoking too many Marlboros—Mr. Landers’s embarrassing and canny portrait of the artist as a young man recalls Rembrandt’s and looks forward to confessional blogs. When he writes “I have to watch TV to escape … I can’t write here I feel like an idiot,” his angst is performative, both sincere and put on. “Am I a manic depressive?” the text asks. “I wonder when I am finally forced to be alone what I’ll discover.”

People felt isolated in 1993, especially if they felt different. Sadie Benning’s grainy 20-minute video It Wasn’t Love was shot in the then-teenager’s bedroom with a Pixelvision camera, a low-fi Fisher-Price video recorder that logged moving images on inexpensive cassette tapes. A tangibly bored butch 19-year old with bleached-blond hair re-enacts her fantasy narrative of glamorous movie romance (“Yesterday night I drove to Hollywood with this chick”). In reality, she’s worlds from Hollywood: visible out a window is the snowy landscape of the suburbs of Milwaukee.

Ms. Benning, a lesbian, was pulled out of school at 16 because of homophobic bullying. She uses her toy camera and props (blond wigs, cigars, berets, leather jackets, makeup and drawn-on tattoos) to make videos about women like herself and their desires. She creates characters that morph through fluid gender identities, and her use of video as a diary feels political—the work examines the role media plays in constructing images of masculinity and femininity. The soundtrack ranges from rockabilly to Joan Jett and Nirvana’s “Negative Creep.” Her video is ultimately optimistic: you are the star; media isn’t a one-way street but can be put to personal purposes. The work, dedicated to “Bad Girls Everywhere,” was included in both the famous 1993 Whitney Biennial and the 45th Venice Biennale that year; Ms. Benning went on to co-found the band Le Tigre.

The rest of the exhibition will bring more on the AIDS crisis, gay rights, and race and gender politics. Rirkrit Tiravanija will serve Thai food; Hans-Ulrich Obrist will talk about his series of do-it-yourself artist instructional works. The questions of the ’90s were: Who are you, and who am I? This show makes the case that isolation and how personal and political identities and alternative media made connectedness possible were major themes of art in this pre-Internet era. In the 1990s, it was hard to find people like you or to explain how you felt and get those feelings out there. (Through May 26) 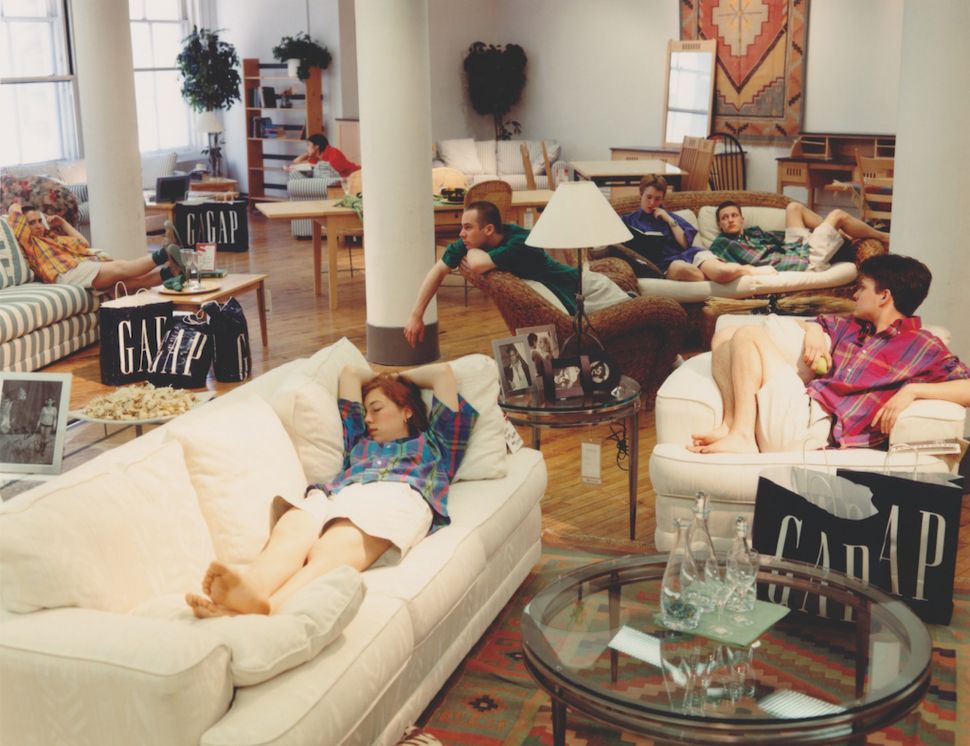