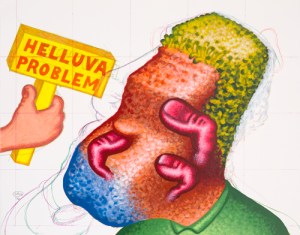 The Ghent, N.Y.–based Omi International Arts Center has named the five winners of its 2013 Francis J. Greenburger Award, which goes to “established artists whom the art world knows to be of extraordinary merit but who have not been fully recognized by the public.” (Good idea for an award, right?) The five honorees this year, who each receive an unrestricted $10,000 grant, are Bruce Porter, Peter Saul, Jonas Mekas, Richard Nonas and Elaine Reichek.

The creation of the award, which is named after philanthropist Francis J. Greenburger (the founder of Omi and chairman of Time Equities), has a rather wonderful back story, courtesy of the organization’s news release:

The awards were founded in 1986 after a conversation Mr. Greenburger had with his friends, André Emmerich and Clement Greenburg, during which André said, “The best and brightest artist of each generation are known, but not to everyone. Ask the inner circle and they can tell you.”