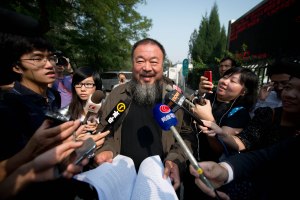 Ai Weiwei in Bejing last year, after a court rejected his appeal on a tax fine. (Ed Jones/AFP/Getty Images)

Just a little public service announcement from the offices of The Observer: PBS sent over a note to say that it will show Alison Klayman’s very excellent documentary about Ai Weiwei, Ai Weiwei: Never Sorry (2012), as part of its Independent Lens program on Feb. 25. It’s a perfect chance to catch the film if you missed it as it screened in theaters across the United States last year!

Though the movie was robbed of an Oscar nomination, Never Sorry picked up the 2012 duPont-Columbia Award and the 2012 Sundance Film Festival Special Jury Prize.

Below, the trailer for the film.