Congressman Pete King was not pleased with his fellow Republicans who opposed the federal Hurricane Sandy relief package. Accordingly, Mr. King told us he was shocked to learn that Florida Senator Marco Rubio, who’s widely seen as a potential 2016 presidential contender, has been raising cash on Wall Street after voting against the Sandy bill.

“Being from New York we’re not supposed to be suckers,” Mr. King told Politicker this morning. “It’s bad enough that these guys voted against it, that’s inexcusable enough. But to have the balls to come in and say, ‘We screwed you now make us president?'”

Mr. King went on to urge Empire State donors to cut off Mr. Rubio and any other member of Congress who “threw a knife in the back in New York” by voting “no” on the bill.

“Rubio and these other Republican candidates are coming to New York to raise money,” he said. “I don’t think any senator or congressman who voted against aid for Sandy should get one nickel from New York.”

Mr. King, of course, wasn’t the only Republican to criticize House Republicans for initially blocking the aid. Notably, New Jersey Governor Chris Christie declared that the cynicism involved was “why the American people hate Congress.” In his conversation with Politicker, Mr. King connected the Conservative Political Action Conference’s recent snub of Mr. Christie to the Sandy vote. 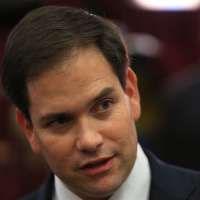