Assemblyman Karim Camara, chairman of the New York State Black, Puerto Rican, Hispanic and Asian Legislative Caucus, is “deeply shocked and outraged” by his fellow lawmaker Dov Hikind’s “black basketball player” Purim costume. In his statement on the costume, Mr. Camara described it as “insensitive,” compared it to the “blackface minstrel show” and demanded an apology.

“I am deeply shocked and outraged by the insensitive actions of Assemblyman Hikind, to dress as a black basketball player complete with tanned skin and an Afro wig,” Mr. Camara said. “We, as leaders have to be extremely careful that we foster understanding amongst our different cultural groups and not use the images of one as a tool for humor. In speaking with many African Americans both leaders and average citizens, the outrage is widespread.”

Mr. Camara compared Mr. Hikind’s costume to stereotypical “blackface minstrels” that were once common in this country.

“The history of the blackface minstrel show is something deeply painful in the African American community. It brings back the memories of African Americans being reduced to ‘buffoonery’ just to gain access to the entertainment industry,” he said. “The stereotypes embodied in blackface minstrels have played a significant role in cementing and proliferating racist images, attitudes and perceptions, which are still painful and offensive today.”

Mr. Hikind has dismissed the criticism of his costume as “Political Correctness to the Absurd.” However, Mr. Camara said, at a minimum, Mr. Hikind should offer an apology to anyone he offended.

“I find the actions of the Assemblyman to be callous and repugnant,” said Mr. Camara. “At the very least, an apology should be issued to those who found his portrayal objectionable.”

Mr. Camara isn’t the only local lawmaker who has spoken out against Mr. Hikind’s Purim getup. Councilman David G. Greenfield, who represents the Boro Park neighborhood along with Mr. Hikind, told Gothamist he disagreed with the Assemblyman’s defense of the costume.

Councilman Charles Barron told the Daily News Mr. Hikind’s justifications for the outfit were “a bunch of crap.”

“It is racist,” said Mr. Barron. “He is trying to justify his racism.”

Mr. Barron continued by saying Mr. Hikind should have used a different strategy if he wanted an outlandish Purim costume.

“If he wanted to find somebody who [looked] strange, wild and crazy, he should look in the mirror,” Mr. Barron said. “He didn’t have to pick on us.” 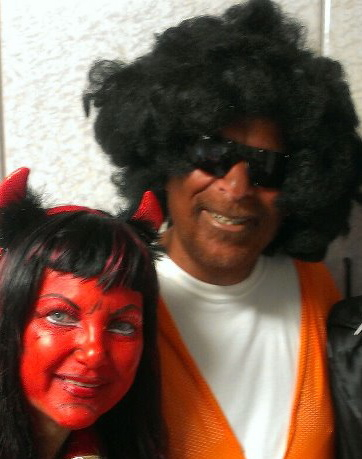