“For years I’ve been an advocate for our city,” Ramos said. “Now more than ever, I believe Hoboken needs a leader with a clear vision for the city, a leader who is willing to work with all sides for solutions. For that reason, I am officially announcing my candidacy for mayor.”

The assemblyman is running against incumbent Mayor Dawn Zimmer.

Running on Ramos’ slate for City Council are Joe Mindak, publisher of hMAG, former Rotarian of the Year, and co-founder of the Hoboken Dads’ Group; Laura Miani, a finance industry professional, open space advocate, and trustee at Stevens Cooperative School; and Eduardo Gonzalez, a board member of the Hoboken Housing Authority, a portfolio manager at a large institutional bank, and trustee at Elysian Charter School.

Ramos and his wife, Norma, live in Hoboken with their three children, Gail, Isabel, and Ryan.

“We’re men and women of various backgrounds, we’re parents, businessmen and community leaders working together on a vision for Hoboken’s future,” Ramos said of his team. “There’s no single solution to the challenges in our community, and we want to have a conversation with the community about how we can make Hoboken a better place to live. We’re not afraid to stand up and negotiate for Hoboken, even if it’s politically unpopular.” 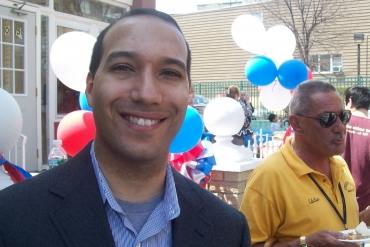