State Sen. Barbara Buono (D-18) may or may not have read the late Charlie Mingus’s acclaimed autobiography, “Beneath the Underdog,” but the same principle probably applies to her campaign.

At the starting point, Buono is targeting issues like gun control and marriage equality, hoping to coalesce party progressives around a strong party message.

But New Jersey is a machine politics state, and at present the Democratic senator confronts the reality of Democratic County organizations beset by fracture and burdened by the real possibility of key leaders crossing no man’s land in the midst of a war to embrace Christie.

It is still very early and a condition of party watchfulness pervades. If Buono cannot cut into Christie’s lead by the fall, legislators in battleground districts will localize their races for the sake of self-preservation, party sources say. If she cannot get to within eight points, the fear is her loss could bleed down.

One party insider told PolitickerNJ.com that Buono’s facility in being able to turn the AshBritt contracting story and economics to her advantage would go far in evening the race and putting her campaign on stronger footing.

But she still has the worry of mechanical problems.

It’s the state’s biggest Democratic county where the most visible party presence, Essex County Executive Joe DiVincenzo, is arguably Christie’s biggest fan. At the very least, Joe D. would have to debate fellow Democrat, state Sen. Brian Stack (D-33), before he could claim that title. Recipient of just 28% of the vote here in 2009, Christie wants to peel away DiVincenzo, who is rumored to be in discussions about how he will endorse the Republican incumbent after the primary, possibly with the assistance of AME Bishop Reginald Jackson and other black ministers as 2014 cover with the African American community. From a fundraising standpoint, insiders will be closely watching Newark Mayor Cory Booker, who promised Democratic Party county chairmen, including John Currie of Passaic and Lou Stellato of Bergen, that he would have their backs financially in 2013. Christie and Buono will both make a strong play for resonance in the county. Both candidates were born in Newark and raised in the Essex suburbs: Christie in Livingston and Buono in DiVincenzo’s hometown of Nutley.  The county will go Buono, but the question is how diminished will turnout be in a county the challenger needs to win big.

The county’s historically most powerful brand name, U.S. Sen. Bob Menendez (D-NJ), is weak right now, dogged by an FBI investigation into his Dominican Republic ties. Barring exoneration and resurrection, Menendez will likely not be the staunch campaign presence Buono would hope for this cycle. If Menendez’s troubles continue, he may have to go dark. It gets worse for the Democratic candidate for governor. There is talk of the Hudson County Democratic Organization (HCDO) trading Stack’s support for Jersey City Mayor Jerry Healy in May for Stack’s post primary endorsement of Christie. The HCDO knows Stack and Christie are tight. They realize they can’t stop him at this point from endorsing the man who Stack identifies as “the greatest governor ever.” Now they just want as little political bloodshed as possible and Stack’s promise to help de-fuse Healy’s rival, downtown Jersey City Councilman Steve Fulop. Buono early has gone hard after the support of state Sen. Nick Sacco (D-32), Stack’s north county rival widely regarded as the second most powerful man in Hudson. Running without Stack’s support, Christie received just 26%. If Stack chips in support this time, Christie could get closer to 30%.

In the words of Marc Antony, this was the cruelest cut of all for Corzine, who lost Middlesex 45.02% to 47.42% to Christie. If everyone stays out of jail, Buono could exceed expectations in her home county, but as with everywhere else given former U.S. Attorney Christie’s history of August election year prosecutions, people will be closely watching the movements of state Attorney General Jeff Chiesa. Christie won Woodbridge four years ago on his way to winning Middlesex County. In a subsequent civil war between Democrats, his rivals used Mayor John McCormac’s post-election street appearances with Christie as proof that he wasn’t a real Democrat. McCormac had a longtime antagonistic relationship with the Corzine Administration, and while he has maintained close ties to Christie, the mayor wants his candidate for chairman, Kevin McCabe, well positioned to take over the party. While no devoted fan of Buono’s, McCormac can’t endorse Christie if he wants McCabe to prevail. He may even have to engage for Buono in order to later offer the argument that Woodbridge ran strong on her behalf. In Edison, there’s a mayor’s race… Christie has complicated the situation for Buono by nominating Middlesex County Freeholder Director Christopher Rafano to a judgeship. Rafano would have been up for re-election this year and in a position to run on a ticket with Buono.

Running with Bergen’s own state Sen. Loretta Weinberg (D-37) on his ticket, but with the encumbrances of Joe Ferriero’s fall and state Sen. Joe Coniglio’s (D-38) corruption case in the headlines, Corzine won the battleground county 49-46%. This year, critics argue that Jim Mordaga is not the party’s strongest candidate, and see a scenario in which Democrats leave Mike Saudino standing this year in exchange for focusing their complete attention on dethroning County Executive Kathe Donovan next year. Saudino and Donovan have clashed notoriously on the subject of what to do with the county police. At least one Bergen source says leaving Saudino in place keeps Donovan pinned down in her own fractured party. As for 2014 challengers to Donovan, sources say John Hogan likes his job too much as clerk – a five-year post – to run for county executive. Two names have emerged as potential challengers to the Republican incumbent: Freeholder Tracy Zur and former Freeholder Bernadette McPherson. Those women may be in campaign mode as they jockey for the early advantage. Now a source tells PolitickerNJ.com that surrogate Mike Dressler is actually more likely to get the support of Chairman Stellato to run against Donovan.

Watch this one. Republicans are motivated by two factors:  a strong sheriff’s candidate in Frank Feenan and the fact that with Christie at the top of the ticket (a 44 to 52% loser to Corzine), GOP countywide prevailed here four years ago. Former Sheriff Jerry Speziale isn’t around anymore, and this will be the first time that his Democratic successor, Sheriff Richard Berdnick, will be running with Christie at the head of the opposition ticket. Passaic County Democratic Chairman John Currie is determined to prove that 2010 and 2012 weren’t flukes.

Buono ran afoul of Senate President Steve Sweeney (D-3) in 2011 and while both sides insist it’s over, they don’t appear overly cozy. State Sen. Jim Whelan (D-2) for one looks willing to coordinate with Buono, and Sweeney is committed to a fundraiser, but there was no South Jersey stampede up to New Brunswick for Buono’s campaign kickoff. There’s a chill factor there, and the question is going to be whether a sufficient number of South Jersey incumbents like their chances more running with or without Buono campaign coordination. Those suburban battleground districts in the south are in a wait and see situation. If Buono ekes out a viable candidacy and gets traction with issues like minimum wage, AshBritt and guns, a competitive race could engage Democrats in South Jersey, as elsewhere. But if she’s not taken seriously, incumbents will start localizing their messages – hard. Look for mailers along the lines of, “We disagree with the governor on social issues but we’re with him when he’s right.” 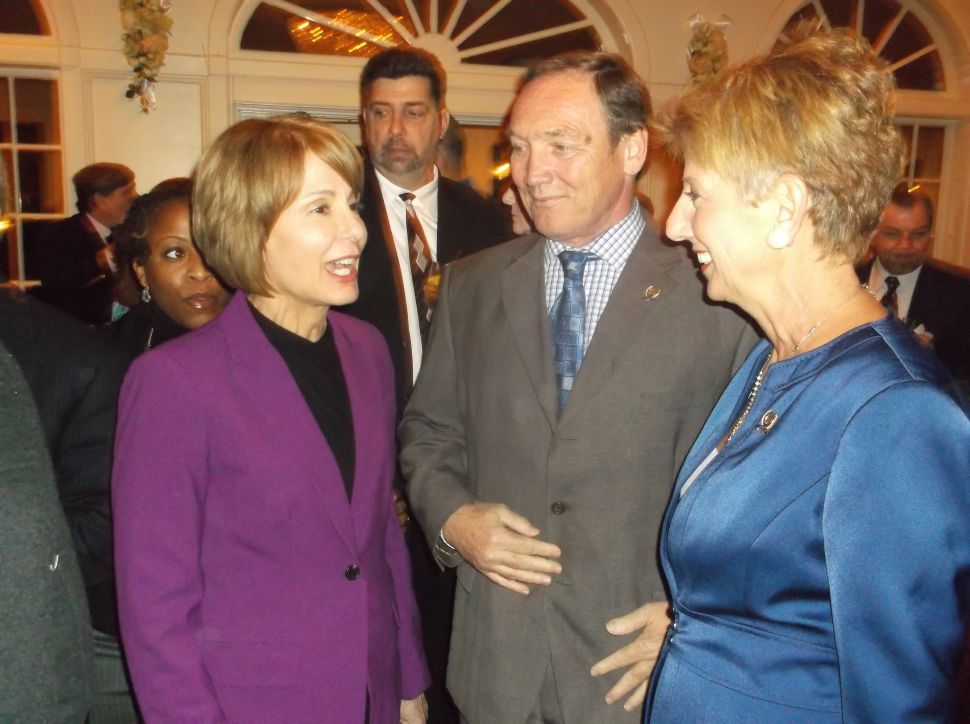